Rebecca Rainey: The Biden administration’s recent call for members of the construction trades to partner with community organizations and offer benefits like child care to attract more women and marginalized communities to the industry is old news to employer and labor groups. Those stakeholders have been working to expand diversity in the field for years, they say, and have been redoubling their efforts in recent months with more than $800 million in training dollars available under the bipartisan infrastructure law.

“We’re really focusing on child care right now,” Melissa Wells, head of diversity for the North America’s Building Trades Unions, said in an interview. She added that child care can be more expensive for workers in the trades because of the industry’s non-traditional hours.

Both industry and labor groups say that working with organizations that can offer assistance like child care or transportation, and reach women and workers of color in their neighborhoods, will be key to getting people traditionally left out of the building trades in the door.

Liliana Calderon, manager of health and safety programs for the International Union of Bricklayers and Allied Craftworkers, said she wouldn’t have entered the trades if she hadn’t found the Chicago Women in the Trades’ Technical Opportunity Program, a pre-apprenticeship program.

“Organizations that help ordinary women or young women to get into any trade, I think, are very valuable,” Calderon said in an interview. The building trades could make more connections with those community and not-for-profit organizations to help “get the word out,” she added. “I think that’s one way we can gear that way to diversify and get more women into trades.”

The Illinois chapter of The Associated Builders and Contractors, an industry association representing construction employers, similarly has a partnership with the nonprofit Project H.O.O.D., that offers employment coaching and financial services on top of technical training to unemployed and at-risk people in the Chicago area.

Unions also are offering new benefit programs specifically focused on retaining women and workers with child-care duties. The Bricklayers, for example, recently announced it was offering a new paid maternity benefit to provide craftworkers with 20 weeks of benefits before childbirth, as well as six to eight weeks of benefits after delivery to assist if they are medically unable to work, in addition to a discount program to help with child-care costs.

“As the union masonry industry continues to build a younger more diverse workforce, recruiting and retaining more women is key,” BAC said in a statement on the new benefits.

NABTU also rolled out a stipend and voucher pilot program this year in New York City to assist with child-care costs, and is developing a program with women-focused organizations to provide child care in Milwaukee. 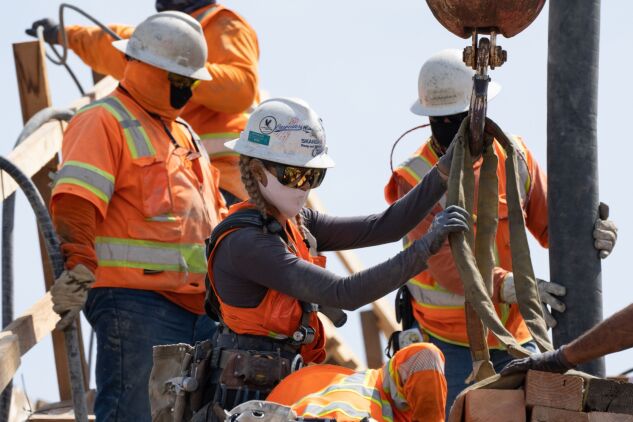 Paige Smith: The EEOC is in a bit of a bind. Eighteen months into the Biden administration, the workplace civil rights agency still has a Republican majority, hamstringing any Democrat policy ambitions. While that’s likely to change, it all depends on what happens on Capitol Hill, and when.

More than three years after she was sworn into office, one of three Republican members of the US Equal Employment Opportunity Commission, saw her term expire on July 1. But she can stick around for quite a while on the leadership panel, if that’s what she wants.

Dhillon can stay in her role through the end of this session of Congress, which is about until the end of the calendar year, because President Joe Biden tapped civil rights attorney Kalpana Kotagal to serve as a commissioner in Dhillon’s seat.

“I am continuing to serve as a Commissioner on the EEOC during the holdover period,” Dhillon told Bloomberg Law in an email.

It’s still unclear when Kotagal will take her seat. The Senate Health, Education, Labor and Pensions Committee deadlocked on her nomination at the end of May, requiring an additional procedural vote to advance her nomination to the Senate floor for a confirmation vote. It also gives Republicans who have misgivings about her nomination a chance to derail her nomination. David Weil, for example, saw the same tie-vote scenario unfold before his nomination failed on the floor earlier this year.

Senate Majority Leader (D-N.Y.) is prioritizing nominees this week, but Kotagal’s name hasn’t yet been mentioned.

For the EEOC’s Democrats and agency observers, waiting seems to be the name of the game.