Chris Opfer: A prominent, labor-backed policy group is out with a new analysis today that’s likely to shape the debate over the Trump administration’s proposal to expand overtime pay requirements. The Economic Policy Institute says workers will lose out on $1.2 billion per year in overtime pay that they would have received under a more expansive proposal floated by the Obama administration and still being batted around in the courts.

“If the department finalizes its new proposal, millions of workers who should get overtime protections will fall through the cracks,” EPI Economist Heidi Shierholz, says in the report.

As public comments on the proposal start to flood in and critics begin crafting a likely lawsuit to to block the rule, data will play a key role in the overtime debate. Meanwhile, the rule’s supporters and critics can’t even agree which numbers they should be crunching.

The proposed rule unveiled by the DOL last month would install a $35,000 salary threshold, under which workers are automatically eligible for time-and-a-half pay for all hours beyond 40 a week. That’s up from the $24,000 level currently in place, but not as high as the $47,000 mark proposed during the Obama administration. The Obama rule, blocked by a federal judge in a decision still on appeal, was expected to make 4 million workers newly eligible for overtime. The Trump proposal will make 1.1 million overtime eligible.

“Because the Department is currently enforcing the 2004 salary level, the economic analysis uses the 2004 rule as the baseline for calculating costs and transfers,” the DOL explained in the proposed rule.

Shierholz told me the Bush rule “is the wrong rule for comparison because it had a glaring flaw.”

The rule paired a low salary threshold with a weak “duties test"—the checklist used to determine whether workers making more than the salary threshold are supervisors, not entitled to overtime wages—Shierholz said. That’s allowed overtime protections to be watered down in the 15 years since, she said.

“The current proposal doubles down on the mistake in the 2004 rule by keeping the weak duties test and setting the threshold very low,” Shierholz said.

In this week’s Punching In podcast, Hassan Kanu talked with Matt Haller from the International Franchise Association about two other big wage and hour issues: joint employment and minimum wages. Check out what Haller had to say about the recent news that McDonald’s won’t lobby against minimum wage hikes.

The Women’s Caucus is looking to bring Acosta and Epstein’s alleged victims into a hearing room to get the full story, Frankel told me. Democrats also haven’t ruled out an Oversight hearing sometime down the road.

“This isn’t the last you will hear about this,” Frankel said after the Appropriations hearing. “A number of us have been talking about it for some time,” she said.

The Epstein debacle may not have been the center of attention during last week’s hearing, but it was certainly on everyone’s mind. It was the first time Acosta responded to the Epstein debacle publicly. He may want to get used to that.

The most aggressive questioning came from Massachusetts Democrat Katherine Clark during her five minutes with the secretary. Clark questioned Acosta’s ability to lead the DOL given his involvement as a prosecutor in the teen sex trafficking case against Jeffrey Epstein.

Frankel, who was one of a few House Democrats who actually signed a letter back in February demanding Acosta resign, was mostly subdued on the Epstein front. She made clear she wasn’t happy about the 13 months Epstein served in prison, thanks to what’s been dubbed a “sweetheart” deal offered by Acosta’s U.S. Attorney for the Southern District of Florida office more than 10 years ago. Frankel also sought clarity on the chain of events that led to the federal prosecutor’s office involvement in what was originally a Florida state case on Epstein.

For his part, Acosta argued that Epstein likely would have walked free had the feds not stepped in.

I caught up with Frankel after the hearing. She called Acosta’s answers evasive. She also said there’s still plenty left to dig into, and she intends to get some answers soon. The case is one that her constituents in Palm Beach, Epstein’s old haunt, are especially worried about, she said.

When I asked if she still stands by her call for Acosta to step down, however, she said there are still plenty of questions left unanswered.

Chris Opfer: The National Labor Relations Board is shooting to propose new union elections rules this spring, Bloomberg Law’s Robert Iafolla reported last week. That information was buried in a memo recently made public from the board to an American Bar Association committee. It’s not the only interesting information in the memo.

There’s been a lot of discussion about the NLRB’s dwindling caseload and whether the agency’s operating budget should be reduced accordingly. The White House in March asked Congress to give the NLRB a 12 percent funding haircut next year, despite lawmakers rejecting a similar request for FY 2019. NLRB General Counsel Peter Robb has made some changes to the way the agency process cases to prepare for potential funding cuts. He’s also likened the board’s regional offices to a “well-aged Swiss cheese,” saying that some offices may be overstaffed while others are playing with less than a full deck.

Some say a decline in the number of cases the NLRB gets each year justifies a similar staffing cut. Others argue that smaller field offices mean fewer labor cops on the beat and therefore fewer cases.

Here’s what the statistics say: The total number of cases the NLRB takes in each year has dropped by nearly 14 percent since 2012. At the same time, the agency’s total number of field employees has declined by more than 27 percent. 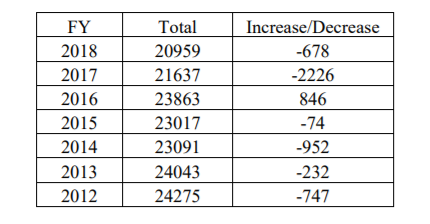 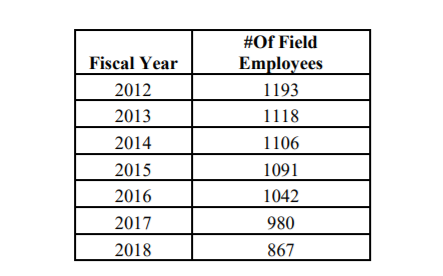 We’re punching out. Daily Labor Report subscribers can check in during the week for updates. In the meantime, feel free to reach out to us on any and all labor and employment news: copfer@bloomberglaw.com and jdiaz@bloomberglaw.com or on Twitter: @ChrisOpfer and @JaclynmDiaz.

See you back here next Monday.