Paige Smith: Democrats applauded the Inflation Reduction Act’s passage Friday, pointing to their wins in tax and clean energy policy, as well as some labor-friendly provisions.

But they’re already looking wistfully back to provisions from the wide-ranging reconciliation bill formerly known as Build Back Better, which called for hefty workplace civil rights enforcement money, paid family and medical leave, and civil monetary penalties for labor law violators. Some Democrats still want to see action on those policies.

“Civil penalties would add real teeth to enforce the National Labor Relations Act, protecting workers and addressing wrongdoing by unscrupulous employers,” he said in an email. “If we truly want workers to have the fundamental human right to form unions and bargain collectively, we need tools to hold employers accountable who violate that right.”

The staff union for the NLRB also lamented the removed funds and proposed penalties for the labor agency, saying they were again “snubbed.”

Some lawmakers, however, are applauding it, slashes and all. House Democrat (N.J.), a frequent critic of warehouses, called the bill a “plain and simple” win.

And for Republicans? They’re not so thrilled with what made the cut. Rep. (R-Pa.) said he’s concerned about the prevailing wage provisions, in an email calling them “a pay-off to labor union bosses.” Rep. ranking member of the House Education and Labor Committee, agreed.

“From Davis-Bacon prevailing wage provisions to incentives for registered apprenticeships, the labor components in this bill resemble a legislative charcuterie board that only a union boss would salivate over,” she said in an email. 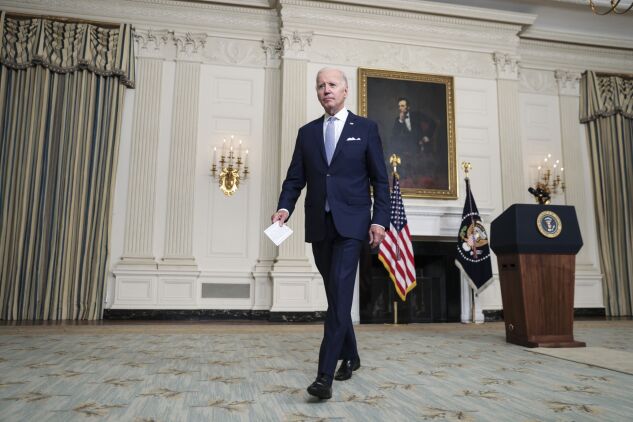 President Joe Biden departs after speaking on the Inflation Reduction Act of 2022 in the State Dining Room of the White House on July 28.
Photographer: Oliver Contreras/Bloomberg

Rebecca Rainey: The Labor Department’s wage division has been busy policing worker misclassification this summer, publicizing five investigations since May 2022 involving workers who were wrongly labeled as independent contractors, when they should have been classified as employees.

The five cases highlighted in news releases from the Wage and Hour Division collectively found nearly 1,000 workers who were misclassified as independent contractors.

A large share of that number comes from one federal investigation in Panama City, Fla., earlier this month that discovered a construction employer misclassified 809 workers at three separate businesses, and owed nearly $230,000 in back pay.

Another investigation in July found that a Houston auto service company misclassified 106 valets and car detailers as independent contractors instead of employees, resulting in the company owing more than $166,000 in back wages.

“The misclassification of employees as independent contractors is a top priority for the Wage and Hour Division,” an agency spokesperson said in an email. “Legitimate independent businesses are a vital part of our economy. Yet we continue to find employers that break the law by misclassifying construction workers, home health aides, and even, as one recent case illustrates, valets and car washers at car dealerships as independent contractors. We are committed to ensuring that employees receive the protections the law provides.”

The enforcement trend follows promises from the Biden DOL to vigorously fight worker misclassification, and comes after the wage division made a pact with the National Labor Relations Board to help maximize and improve enforcement, particularly when it comes to worker classification issues.

The Biden administration also is pursuing a rulemaking to clarify how it decides who is an independent contractor or an employee covered by the Fair Labor Standards Act, a change it says is necessary to ensure that workers are being properly classified under the law. That proposal is under review at the White House budget office, the final step before it is made public.

The five cases are: