U.S. President-elect Joe Biden works the crowd in Wilmington, Del., Saturday as he addressed the nation hours after his victory over President Donald Trump was sealed by Pennsylvania's tally.
Photographer: Sarah Silbiger/Bloomberg

Ben Penn: President-elect Joe Biden’s labor priorities will come into focus with his pick for labor secretary, a decision made that much more challenging by uncertainty over Senate control in the next Congress.

Plenty of names have been floated in progressive labor circles, but it’s unknown whether Biden’s team is considering any of them. Those being bandied about most often are Obama-era Labor Department officials Seth Harris and Sharon Block; freshman Congressman and former AFL-CIO organizer (D-Mich.); California Labor Secretary Julie Su; and Sen. (I-Vt.).

History suggests Biden may go with someone who hasn’t entered the rumor mill. It was a complete surprise, even to the labor movement, when Barack Obama announced his intent to nominate Hilda Solis for labor secretary in December 2008. Solis, a congresswoman from California at the time who became the first Latina Cabinet secretary in U.S. history, was an eleventh-hour suggestion from Obama’s chief of staff, Rahm Emanuel, according to a former Obama official.

Biden and his inner circle are already under pressure to appoint a labor secretary who’s endorsed by the AFL-CIO, if not a union leader, four sources familiar with this push said.

“You’d have to go back 48 years to Richard Nixon, to the last labor secretary ... who came out of the labor movement—which is deplorable,” said Ken Zinn, political director of National Nurses United, a union with a seat on the AFL-CIO executive council.

Over the last five decades, as the labor movement weakened and became more closely affiliated with Democratic politics, presidents from both parties shied away from tapping a union official to lead DOL. If there’s any president who could change that, it would be Biden, a longtime champion of unions, blue-collar workers, and collective bargaining.

There’s also a push within organized labor for Biden to select someone with undeniable political clout—either a high-profile name or someone firmly established in the Biden fold.

Political gravitas will be needed, backers of this concept say, to outmaneuver other powerful voices in Biden’s Cabinet; otherwise, workplace issues could play second fiddle to other policy priorities—from virus response and climate-change action to addressing health-care costs and the corrosive political divide. These sources are quick to note that labor issues have been overshadowed in past Democratic administrations. 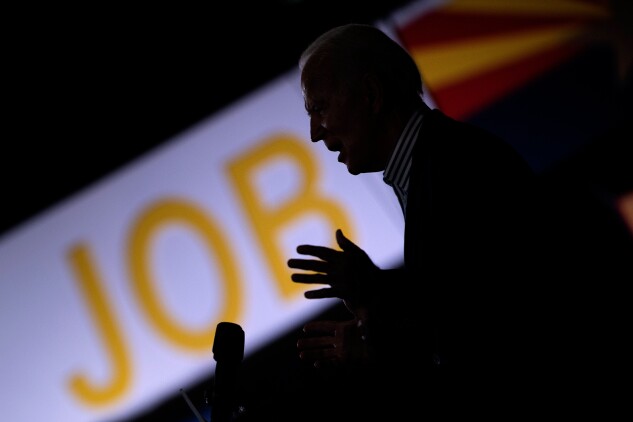 Then there’s the confirmation question. The possibility of Republicans retaining Senate control has many in the labor movement fearful that Biden could go with a moderate capable of winning Senate confirmation, rather than an ardent supporter of unions and aggressive regulation.

“The next two years are really a chance for Joe Biden, who really is a working-class champion, to deliver on the labor front,” Lee said. “He’s got a very short window to make his case to the American people; he can’t do that with a bunch of timid, retread Wall Street corporate Democrats.”

Ian Kullgren: A Biden battle with a GOP-controlled Senate in the next Congress would have big implications for the National Labor Relations Board.

The NLRB’s future during the Biden administration hinges on Biden getting nominees through the Senate. Republicans will control the board until August, even though Democratic member or a potential Democratic nominee for the board’s remaining Democratic vacancy, will take on the role of chair.

If Biden’s administration can fill seats in normal order, a Democratic majority would be in place by fall 2021.

But that won’t be easily done if Republicans prevail in two Senate runoffs in Georgia next month. Bad blood between Republicans and Democrats over how Trump appointees to the board have handled alleged conflicts of interest could paralyze the nominations process for NLRB picks.

Gridlock raises the possibility of the labor board lacking a quorum by 2022. Republican member William Emanuel’s term expires in August 2021 and GOP Chairman John Ring’s the following December.

Labor leaders will play hardball to get favorable nominees confirmed. AFL-CIO President seemed to suggest late last week that Democrats could use future Republican vacancies, and the quorum issue, as leverage.

“If Republican terms expire and [Senate Republican leaders] don’t cooperate with us, there won’t be an NLRB, and that could create some interesting opportunities for us,” Trumka told reporters Thursday.

On the other hand, the close election could encourage Biden and Senate Majority Leader Mitch McConnell (R-Ky.) to strike a deal on moderate appointees to the NLRB and other agencies, said Michael Lotito, a management-side attorney at Littler Mendelson.

Either way, the Republican majority will have eight months next year to advance a GOP agenda under a Biden administration.

The Republican members could use that time to restrict unions’ use of “Scabby the Rat” and other protest symbols; scrap a bar on union decertification elections during the life of a collective bargaining agreement; and advance a rule that would strip student assistants at private universities of their unionization rights.

The meeting notice provided scant detail, but the EEOC said on its website that it’s amending the religious-discrimination section of its compliance manual to reflect a ruling in Our Lady of Guadalupe School v. Morrissey-Berru, a SCOTUS decision from July.

That suit explored the legal interpretation of the ministerial exception, which excludes religious institutions and their employees from some anti-discrimination laws, per the First Amendment. The high court broadened the scope of the exception in its decision, blocking two former Catholic school teachers from suing for workplace discrimination.

Courts should give weight to a religious employer’s view of worker duties, such as whether they educate students in their faith, the justices said in the 7-2 opinion.

The agency’s existing guidance says ministerial exceptions apply “only to those employees who perform essentially religious functions, namely those whose primary duties consist of engaging in church governance, supervising a religious order, or conducting religious ritual, worship, or instruction.”

The EEOC also could consider inevitable clashes in the future between religious liberties and the high court’s view of federal anti-discrimination protections applying to LGBT workers.

Adam Herzog, a partner with Katz, Marshall & Banks, said the EEOC sometimes uses guidance to fill in gaps left by U.S. Supreme Court jurisprudence. But he said he hopes that, given how new the Bostock decision is, the agency “will not view that as a hole that needs to be filled just yet.”

—With assistance from Jim Rowley