Robert Iafolla: While the National Labor Relations Board has seen a major spike in petitions for union elections, the agency is still mostly using Trump-era changes to election rules that the current board chair has criticized as adding unnecessary delays throughout the process.

The AFL-CIO’s lawsuit to block the regulation amending the election process—filed in March 2020—remains pending. A federal appeals court in Washington heard oral argument in the case 14 months ago, but hasn’t issued a ruling.

The NLRB in 2019 made a series of modifications to the agency’s protocols for union elections by extending procedural deadlines, lengthening the period between the filing of a petition and the actual vote, and giving employers more opportunities to challenge the process.

The bulk of the board’s election regulation cleared initial court review in a pair of 2020 decisions from then-District Judge Ketanji Brown Jackson, which she handed down about two years before joining the US Supreme Court.

The NLRB implemented the legally valid Trump-era changes halfway through 2020. Although the onset of the Covid-19 pandemic surely impacted the agency’s handling of the representation process, elections have taken longer under the new rules. 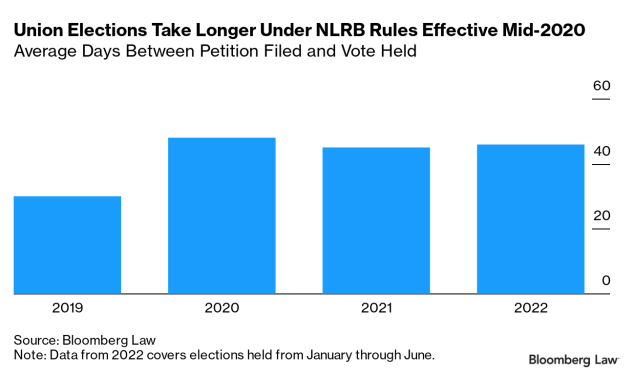 Organizing activity has also been spiking. The amount of union petitions filed with the NLRB grew by 58% from October 2021 to June 2022, compared to the same period in 2020 to 2021.

But the looming decision on the NLRB’s election rules could mean the agency has to change its procedures even as it tries to process the surge of new election petitions.

The NLRB and AFL-CIO jointly filed a letter to the US Court of Appeals for the District of Columbia Circuit in May asking it to decide the case as soon as possible.

Both the agency and the labor federation want a decision so everybody can move forward with a clear understanding, said Becker, the AFL-CIO’s top lawyer and a former NLRB member.

The Biden board will have some choices to make following the court decision, including whether it wants to revise the Trump board’s changes if they survive review, he said.

The NLRB could start rulemaking on election procedures at any time, but it may be waiting for resolution of some of the legal issues in the pending case, including whether modifications need to go through the formal notice-and-comment process, Becker said.

AFL-CIO Challenge to Labor Board Election Rule Put on Hold 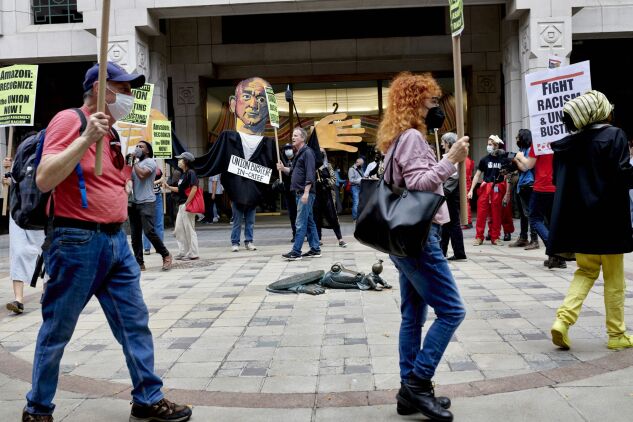 Workers and supporters hold signs after filing a petition requesting an election to form a union outside the National Labor Relations Board regional office in the Brooklyn Borough of New York.
Photographer: Gabby Jones/Bloomberg

Bruce Rolfsen: The Occupational Safety and Health Administration is also looking at a redo of a prior rule—the standard to protect health-care workers from Covid-19.

With OSHA moving to issue a “permanent” Covid-19 standard as soon as September, it’s worth looking at how the now-expired emergency temporary rule was enforced during its six-month run.

A Bloomberg Law analysis showed that OSHA cited 91 employers for violations. The inspections found 203 violations at the 91 workplaces—mostly hospitals and nursing homes.

The emergency rule took effect June 21, 2021, and OSHA announced Dec. 27 that it was no longer enforcing most of the rule’s provisions because the agency missed a Dec. 21 deadline to issue a permanent measure. However, OSHA has up to six months after an inspection to cite a violation, so employers continued to receive citations for violations well into 2022. 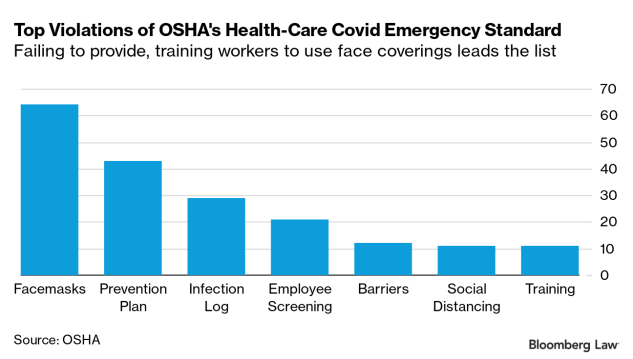 The most common violation OSHA found, cited 64 times, was failing to provide face masks to workers and ensuring they were worn in accordance with the agency’s separate rule for respiratory protection.

Health-care unions throughout the pandemic have complained employers often didn’t have enough N95 or more protective respirators, forcing workers to use the same covering multiple times, and that when supplies were adequate access to respirators was restricted.

Failing to develop and implement a Covid-19 infection prevention plan was the second most frequently cited violation with 43 cases. The third most frequent violation was not maintaining a log of workers infected with Covid-19, at 29 cases.

The health-care standard wasn’t the only one the agency enforced on those 91 inspections. In about two-thirds of the inspections, employers were also cited for not following OSHA’s long-standing respiratory protection that covers use of highly protective N95 and similar respirators.

On average, the initial proposed fine from citations for private employers, including violations other than the Covid standard, was about $16,475. Those fines were often reduced as part of settlement agreements. For example, the highest proposed fine against an Illinois nursing home, clocking in at $83,675, was reduced to $48,000 after settling.

Most of the inspections were prompted by reports of workers dying from or being hospitalized for Covid-19, inspection summaries showed.

At an Ohio extended care facility, a nurse who didn’t work in the Covid unit became ill on Oct. 31 and died 10 days later. A Texas emergency room nurse, who came in contact with Covid-19 patients, showed symptoms on Sept. 21 and died three days later. A medical equipment installer and repairman in Texas was exposed to Covid while working the first week of September and died Oct. 11 after three weeks of hospital care.