Bruce Rolfsen: The U.S. Supreme Court’s consideration of OSHA’s shot-or-test rule is coming down to the wire, as employers await a possible decision Monday, the date the agency had slated as the jumping off point for enforcement.

Word could come at any time on whether the justices will allow the Occupational Safety and Health Administration to enforce its emergency temporary standard for employers with 100 or more workers. At a special argument session Friday, the high court’s conservative members were skeptical of the agency’s authority to compel vaccination or testing for some 80 million workers at private businesses.

Apart from the drama and expectation at the high court, the agency is continuing development of a permanent standard, due May 5.

“We’ve got to remember the ETS has a shelf life of only six months. We’re already two months into its six-month life,” said Eric Hobbs, a shareholder with Ogletree, Deakins, Nash, Smoak & Stewart P.C. in Milwaukee. “It’s anybody’s guess how long it will take the Supreme Court and the Sixth Circuit to decide the ETS case on the merits.”

Monday was supposed to be the day when OSHA would begin requiring employers to determine which of their workers aren’t fully vaccinated and ensure they wear masks in many situations. If OSHA prevails, Feb. 9 is the deadline for employers to ensure unvaccinated workers are tested weekly.

There’s an uncharted-waters aspect to this waiting game. Friday’s hearing was the first time in decades the high court heard arguments on emergency requests for a stay without ordering the full briefing that takes place when cases are heard on the merits.

Friday’s hearing also highlighted that OSHA faces a lower threshold for justifying a permanent standard than an emergency standard, which could influence the agency’s long-term strategy.

An emergency rule must involve a “grave danger” and be “necessary,” while a normal OSHA rulemaking for a lesser workplace hazard can be justified that it is “reasonably necessary.”

Hobbs said he expects the permanent standard will be a broad infectious disease rule and not one focused solely on Covid-19.

OSHA is scheduled to issue a notice of proposed rulemaking for an infectious disease rule in April that likely would include options for the standard’s provisions and invite public comment. The agency is also accepting comments on a possible permanent Covid-19-only standard through Jan. 19.

The arguments Friday showed the challenges of issuing a standard when the hazard—Covid-19—continues to change, said Alka Ramchandani-Raj, a shareholder with Littler Mendelson in Walnut Creek, Calif., and co-chair of the firm’s Workplace Safety & Health Practice Group.

For example, the omicron variant became dominant in the U.S. after the emergency standard was issuedNov. 5.

“Even if OSHA was to do an infectious disease rule, how are they going to develop something where they don’t know what the hazard is going to look like?” Ramchandani-Raj said. “We say it’s Covid-19, but each variant has posed different hazards.”

The question of whether the emergency temporary standard would be effective against the highly contagious omicron strain sparked a memorable exchange Friday between Justice Sonia Sotomayor and Benjamin Flowers, solicitor general for Ohio, one of the states suing to stop rule.

“Finally, the other point in the public interest is that one awkwardness of this situation is that the ETS is focused on what was really a different pandemic,” Flowers told the court. “It’s all about the delta variant. Now we are on to omicron.”

Sotomayor responded that omicron is driving record hospitalization numbers. “We have more affected people in the country today than we had a year ago in January,” the justice said.

Labor Board Moves to Scrap Rulings Over Ex-Member’s Conflict

Rebecca Rainey: Part 2 of the David Weil confirmation battle is gaining steam, and this week could show whether he’ll face another standoff in committee.

Business groups are ramping up their lobbying fight against Weil, after the Biden administration renominated him to reprise his Obama-era role as Wage and Hour chief at the Department of Labor.

The Senate Health, Education, Labor and Pensions Committee is set to reconsider him Jan. 12, along with Lisa Gomez, to run the Employee Benefits Security Administration, and José Javier Rodríguez, to take over the Employment and Training Administration.

More than a dozen business groups, including the International Franchise Association and the Associated Builders and Contractors, warned committee leadership in a Jan. 5 letter that his “track record of bias against the regulated community” would harm workers and businesses.

Weil, who was bottled up in committee after a party-line tie in August, is arguably the most contentious pick of Biden’s labor nominees. That’s mainly because the administration has a chance to rewrite rules defining joint employment liability and when an independent contractor qualifies as an employee.

Weil has been critical of the independent contractor model embraced by tech giants such as , and , and has previously argued that most workers are employees who are due protections under the Fair Labor Standards Act.

Expect more noise about Weil this week, as we’re told other industry groups plan to remind lawmakers of their disdain for the nominee. 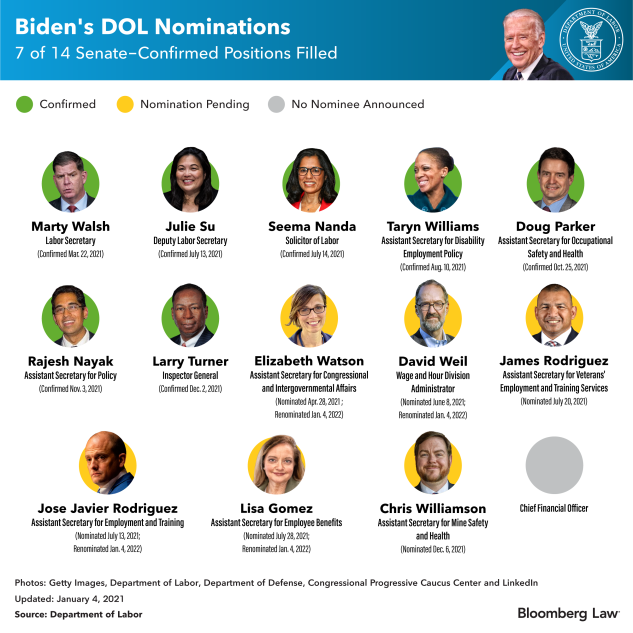 Weil may and likely will need all 50 senators who caucus with Democrats to support him, but last year Sen. Joe Manchin (D-W.Va.) had privately expressed concerns about his nomination. Manchin hasn’t said anything publicly, but Weil’s supporters aren’t sweating it.

The Labor Department is “confident” Weil will have the necessary votes in the Senate, a spokesperson said in an email, adding that Labor Secretary Marty Walsh is “in regular communication” with senators about nominations.

Confirming him could involve bringing in Vice President to deliver a series of tie-breaking votes. That would take time.

Even so, worker advocates are also pleased with the work of current acting Administrator Jessica Looman, who led the Wage and Hour Division as it rolled back the Trump DOL’s joint employer and independent contractor rules last year.

“Jessica does not feel like she is at all limited in waiting for David to be confirmed,” said Judy Conti, director of government affairs for the National Employment Law Project. “She is fully empowered and acting as such.”

Looman last week rolled out a new agreement for WHD to share enforcement intel with the National Labor Relations Board, including on probes focused on contractor status and joint employment liability.

—With assistance from Paige Smith

To contact the reporters on this story: at rrainey@bloombergindustry.com; in Washington at BRolfsen@bloomberglaw.com