OSHA Out of Time?|WHD’s Thinning Ranks

Bruce Rolfsen: OSHA’s plans to resurrect its Covid-19 standard for health-care workers may encounter stiff legal resistance as employer groups ask whether the agency missed its deadline for issuing a permanent measure.

That issue arose repeatedly during the written public comment period preceding the April 27 start of the Occupational Safety and Health Administration’s online public hearings about the standard. The proceedings are scheduled to last for four days.

David Addington, general counsel for the National Federation of Independent Business, told the agency he doubts the legality of OSHA’s health-care rulemaking. The attorney was among the successful challengers to the agency’s Covid-19 shot-or-test rule.

“OSHA no longer has the authority to promulgate a final standard,” Addington wrote in a comment letter. “That authority expired in December 2021. Accordingly, the notice is void and OSHA should withdraw it.”

The regulator wants to issue the permanent rule as a follow-on to its emergency temporary standard for health care issued on June 21. But the law creating OSHA—the Occupational Safety and Health Act—gives the agency just six months to issue a permanent version of a rule after enactment of an emergency standard, meaning the time to do so arguably expired four months ago.

“That six-month date was December 21, 2021. With no final standard issued, by then the effective period for the ETS lapsed and OSHA rightfully announced its withdrawal,” Marc Freedman, the U.S. Chamber of Commerce’s vice president for workplace policy, said in the chamber’s comment letter.

But OSHA isn’t likely to ditch the initiative. With the Supreme Court’s January decision that effectively killed the agency’s shot-or-test mandate and OSHA’s Dec. 27 announcement that it wasn’t enforcing its temporary standard, the permanent health-care rule is OSHA’s lone Covid-19 rulemaking.

Agency officials have said several times they intend to issue the permanent rule before end of 2022. OSHA took those written comments as part of that process.

On the other side, unions and other worker groups are concerned OSHA will water down the emergency health-care standard’s requirements. The AFL-CIO and National Nurses United have sued to compel the agency to issue an appropriate, and permanent, measure within 30 days of the court ordering it to do so.

“Rather than weaken the ETS and OSHA’s own enforcement stance, OSHA should prioritize and strengthen safety protections based on the ETS and experience of the COVID-19 pandemic,” wrote Debbie Hatmaker, chief nursing officer for the American Nurses Association.

Among the changes OSHA is considering is how much the final rule should align with guidance from the Centers for Disease Control and Prevention, and how to allow employers to incorporate CDC guidance issued after the rule is issued. The regulator raised the idea by declaring that employers following the CDC guidance at the time of an inspection wouldn’t be cited for not adhering to older guidance specified in the standard. And the agency continues to get requests to extend the scope of the rule beyond health care to other essential industries such as food production.

“Because food systems workers face the unique occupational dangers that, under Supreme Court precedent, justify special protection, we urge OSHA to expand this ETS to protect this group of vulnerable workers, as well as other essential workers who face similar workplace dangers,” attorneys with Texas RioGrande Legal Aid Inc. told the agency. 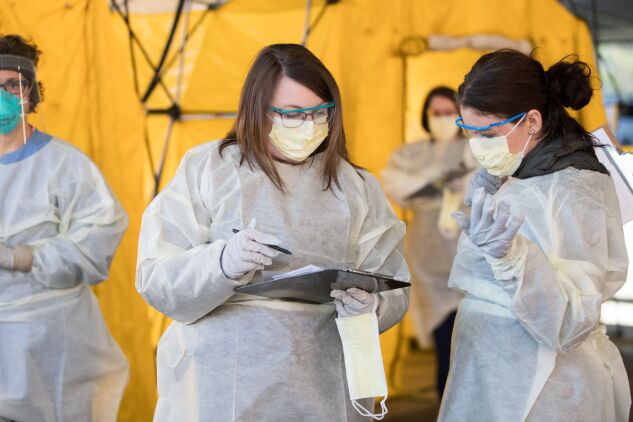 Health-care workers look at paperwork outside of medical tents where Covid-19 tests are being conducted at Newton Wellesley Hospital in Newton, Mass.
Scott Eisen/Bloomberg

Rebecca Rainey: The Labor Department’s Wage and Hour Division has lost 32 investigators since the end of last year, pushing the agency’s staffing levels to a 50-year low despite launching a new hiring initiative earlier this year aimed at bringing on 100 new employees. The division is in charge of enforcing overtime and minimum wage protections under the Fair Labor Standards Act.

There were 725 investigators at the division at the end of March 2022, according to a Department of Labor spokesperson. That’s the lowest number on record since at least 1973, according to data provided by the DOL.

The agency announced in January that it was seeking 100 new investigators to help bolster the division’s ranks, acknowledging that staffing had reached “historic lows.” At that time, the WHD had about 757 investigators on board, meaning that nearly three dozen have left since the hiring effort began.

The agency “is still in the process of bringing on board the newly hired Investigators,” an agency spokesperson told PI. “We remain committed to bringing on the previously announced 100 Investigators.”

The investigator attrition also follows a disappointing enforcement year for the division. The agency recovered $234.3 million in back wages in fiscal year 2021, about $23.5 million less than the year prior, when the pandemic made enforcement more difficult.

And it seems that hiring woes aren’t only among the agency’s rank and file, as the WHD remains without a permanent, Senate-confirmed leader after President ‘s nominee David Weil withdrew from consideration earlier this month. Check out last week’s PI for more details on how that could make things complicated for the Biden administration’s regulatory plans if it decides to nominate the agency’s acting head Jessica Looman to fill the post permanently.

To contact the reporters on this story: at rrainey@bloombergindustry.com; in Washington at BRolfsen@bloomberglaw.com