Contractors in Crosshairs | Burdens of Enforcement | PPE, Not Employee

J. Edward Moreno: The US Department of Labor’s federal contractor watchdog will soon release a list of 400 companies it’s teed up for audit, checking their compliance with federal nondiscrimination laws.

The coming list of Corporate Scheduling Announcement Letters will prioritize industries that continued hiring amid the pandemic, Office of Federal Contract Compliance Programs Director Jenny Yang said at an Institute for Workplace Equality event on Wednesday.

And, once the filing period ends for the OFCCP’s Affirmative Action Plan Portal, those who don’t certify or even register there will likely be prioritized for audits in the next CSAL list coming this fall, she said.

Doing neither “suggests there’s not much attention to compliance,” Yang said.

The audits are the first since the agency released two new directives earlier this year—the first two of the Biden administration.

One of those directives indicates the agency will more closely scrutinize pay equity audits, which contractors are required to do. The other proposes rolling back a previous directive that gave companies at least 45 days after the audit list is published to prepare. Under that proposal—which is not yet finalized—the OFCCP could send a scheduling letter to a contractor any time after CSAL list is published.

Those directives will make it hard to predict how these next rounds of audits go, according to Mickey Silberman, an attorney who represents contractors in OFCCP matters, and who was present at the IWE conference.

“It’s going to be the wild west in these audits,” Silberman said. 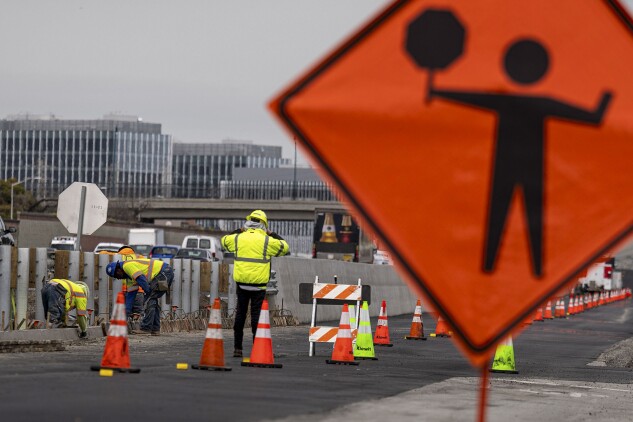 Contractors work on a road under repair along Highway 101 in San Mateo, Calif., on March 17, 2021.
David Paul Morris/Bloomberg via Getty Images

Last week, Democrats introduced the Wage Theft Prevention and Wage Recovery Act (), which would bar the use of arbitration agreements and class action waivers for claims under the Fair Labor Standards Act, as well as require employers to provide detailed pay stubs or records to workers, which is currently not required by federal law.

The bill would also beef up monetary penalties and damages when wage theft occurs, and create a right to full compensation “at the rate specified in the employment contract, including the rate in collective bargaining agreements.”

The latter of those changes could create a handful of new enforcement responsibilities and needed training for the DOL’s Wage and Hour Division, which is already severely shorthanded, according to Tammy McCutchen, a WHD administrator under President George W. Bush.

“The agency doesn’t have the staffing right now. They’re at a 50-year low and the number of investigators having to do a completely new cause of action, new training,” McCutchen told PI. “They’ve never enforced contracts.”

Bloomberg Law reported last week on how low morale at the division has led to the lowest number of investigators on staff since at least 1973, leaving just 725 investigators in charge of over eight million workplaces.

If WHD can’t staff this legislation, they can’t do the work they have before them now, said the bill’s co-sponsor, House Education and Labor Chairman Bobby Scott (D-Va.).

When it comes to funding, Scott pointed out that Rep. Rosa DeLauro (D-Conn.), chair of the House Appropriations Committee, has also signed on to the legislation and can ensure that the bill will be funded to provide the WHD with the resources it needs.

Chris Marr: In the wide-ranging legal battle over gig worker classification, Florida just created a new category of worker—albeit for the limited purpose of employers providing safety equipment, training, and other support during a public state of emergency.

Inspired by the Covid-19 pandemic, the new Florida law will let businesses provide certain kinds of equipment and financial assistance to an “engaged individual,” which includes independent contractors, while barring those workers from using that support as evidence in court that they deserve to be classified as employees for purposes of wages, benefits, or other legal protections.

The new law, which takes effect July 1, is the latest wrinkle in the patchwork of US court, legislative, and regulatory actions aimed at determining who can be classified as independent contractors for purposes of workplace and tax law—denying them access to the full range of workplace benefits and legal protections that come with employee status.

Among the push and pull of business interests and worker advocates, some policymakers have pushed for a middle ground such as in a newly enacted Washington state law that guarantees certain benefits to Lyft Inc. and Uber Technologies Inc. drivers without deeming them employees.

During the height of the pandemic, companies that classify workers as independent contractors feared that providing masks or other equipment might lead to lawsuits in which the workers sought other employee benefits, according to the Florida law’s legislative sponsors.

A similar concern could apply to a Florida business that hires short-term contractors to help repair infrastructure following a hurricane, for example, said Herbie Thiele, a spokesman for the conservative group Americans for Prosperity-Florida, which lobbied in favor of the measure.

“Companies and business owners should not be punished for going the extra mile to protect independent contractors if they provide contractors with training and safety equipment,” Thiele said via email.

The group would support this kind of legislation spreading to other states, he said.