Rebecca Rainey: The U.S. Department of Labor wants states to compete for funding to test new methods of increasing workforce awareness of jobless-aid benefits, part of a larger effort to bolster the unemployment insurance safety net.

The funding—$15 million to be divided evenly among five states that offer the best ideas—stems from the department’s ongoing rollout of $2 billion Congress allocated to the DOL under the American Rescue Plan (Public Law 117-2), nearly a year after its passage.

The DOL’s Employment and Training Administration, which oversees the federal-state unemployment system, says the delay in advancing the “navigator” grants was deliberate, and that it wanted to address technical issues state programs were facing before doling out the money.

“Part of the reason it’s taken a little bit of time to get this out was we really wanted to get it right,” Michele Evermore, ETA’s senior policy adviser on jobless aid, told Punching In.

The goal is for states to design and test-drive new approaches aimed at ensuring workers know they’re eligible for unemployment benefits and how to apply. Emphasis will be placed on people who have lost low-wage jobs, those with low English proficiency, women, people of color, and other groups that typically struggle to access jobless aid.

The application process will be competitive—the department is looking for an effective formula that could be applied elsewhere.

“Instead of having navigators in 53 states all at once, there were decisions made to narrow it down so we could try it in about five states first, and make sure that we understand how it works,” Evermore explained. “So, we’ll be able to make any tweaks necessary to make this a bigger thing if it does what we think it will do. But, right now, we need a proof of concept.” 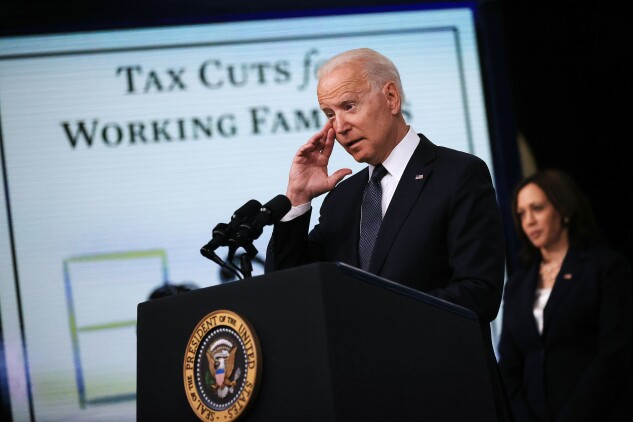 President Joe Biden, with Vice President Kamala Harris at his side, discusses a temporary increase in the child tax credit that was included in the American Rescue Plan, during a media event in July.
Photographer: Chip Somodevilla/Getty Images

The pandemic-induced deluge of applications for benefits in 2020 exposed the disjointed nature of the system, with the DOL setting the general structure and paying for the administration of benefit programs, while the 53 state or territorial unemployment agencies actually set the rules and pay out the aid. Fraud was rampant, and delays maddeningly common. Shortcomings in public awareness were also an issue, though not a new one.

“There’s a gap there in people thinking that they’re worthy of an unemployment insurance benefit,” Evermore said.

She pointed to a survey the Bureau of Labor Statistics conducted in 2018 that found 59 percent of unemployed people who didn’t apply for jobless benefits mistakenly thought they were ineligible. Another 12 percent cited “attitudes about or barriers to applying,” including that “they did not know about UI, or they had problems with the application process.”

The ETA so far has issued at least $195.7 million in American Rescue Plan grant funding to state agencies to address fraud in pandemic emergency unemployment programs and to enhance cybersecurity, according to DOL’s website.

In December, DOL’s newly formed Office of Unemployment Insurance Modernization announced it picked New Jersey and Arkansas to pilot a new unemployment application system that other states could eventually adopt.

AstraZeneca Will Ax Its U.S. Workers’ Pension Plan This Year

‘Crazy Mess’ of Jobs Data Has Economists Getting It Wrong Again 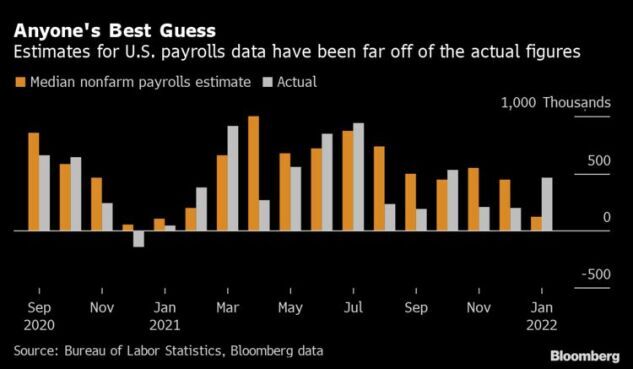 After all, SECURE Act 2.0 would be a curtain call for lawmakers after they passed the first-generation bill in 2019, which expanded pooled plans and gave retirees more time to build up savings.

But the devil’s in the details, of course, and that means finding consensus on three very different legislative proposals (or more, depending on whom you talk to), not to mention the difficulty of passing anything substantive during a midterm election year.

Policy disagreements over a controversial mandate for workplace retirement plans and an expensive refundable tax credit could upend efforts to hammer out legislative text for 2.0.

Without those elements, industry observers fear Congress could produce legislation incapable of increasing the number of Americans who save for retirement, and how much they put away.

“The SECURE Act started by providing that little nudge to employers to set up retirement plans and workers to begin saving,” said Alex Assaley, president of the National Association of Plan Advisors and managing principal at AFS 401(k) Retirement Services in Bethesda, Md. “We’ve been using a carrot, and now we need a little bit of a stick.”

But a one-size-fits-all approach to retirement savings has drawn ire among some practitioners and could make for a tough sell in the Senate, said Fred Reish, a partner at Faegre Drinker Biddle & Reath LLP.

Another major hurdle to bipartisan consensus is a refundable “Saver’s Credit” that appeared at one point in Democrats’ Build Back Better plan and Sen. Ron Wyden‘s (D-Ore.) Encouraging Americans to Save Act (S. 2452). The credits would act as a match to yearly contributions, incentivizing workers to increase their deferrals and employers to start plans without a match.

“Those credits are so substantial that they could also be a game changer in terms of encouraging the formation of new plans,” Reish said.

But then there’s the price-tag issue. The Congressional Budget Office estimated a similar tax credit proposal in 2011 would cost $29.8 billion, a ball park that could present unfriendly confines for more than a few lawmakers if the credit makes it into the next-gen bill this year.