A job applicant inquires about positions during a job fair at the Seminole Hard Rock Casino in Tampa, Fla., on May 25.
Photographer: Octavio Jones/Getty Images

Ben Penn: The congressional watchdog agency released preliminary data that the Biden administration and its congressional allies say confirms a reality laid bare by the pandemic: People of color have a tougher time than Whites in accessing unemployment insurance.

More than 80% of White workers who applied for jobless benefits reported receiving their unemployment insurance checks during the pandemic, compared with 73% of Black applicants, the Government Accountability Office found.

While GAO’s analysis was incomplete and didn’t determine causes of the disparity, two government entities with the power to address the situation—the U.S. Labor Department and the House Ways and Means Committee—said the findings reinforce their calls for administrative and legislative solutions, respectively, to reduce racial inequality in jobless aid.

In the partisan split over the federal-state unemployment insurance system, Republican lawmakers argue that red states opting out of expanded benefits before their expiration will encourage people to reenter the workplace (albeit, in some cases, at lower wages than they’d prefer).

Republicans say this austerity will rebound red-state economies faster than in blue states, where more generous weekly checks will be paid to a wider pool of applicants for three more months.

The rub is that statistics to measure the GOP argument remain to be seen, and now the Biden administration and Democrats believe they have fresh ammunition in their bid to to ensure vulnerable workers gain fair access to jobless aid.

The GAO said it wanted to share its initial findings right away, to inform the Labor Department’s time-sensitive outreach to states. Expanded benefits and eligibility provisions expire Sept. 6.

The department has a plan to “to try to really address structural racism” in the unemployment system, utilizing $2 billion Congress authorized in the American Rescue Plan, a DOL official told Bloomberg Law on June 18. The funding was intended to target three areas of unemployment system administration: fraud prevention, equitable access, and timely payment.

The official, who spoke on background in an interview arranged by the department, said details could be released within a few weeks. 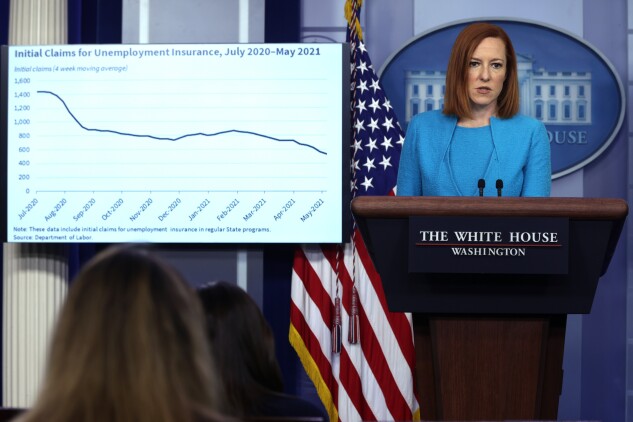 White House Press Secretary Jen Psaki speaks about unemployment insurance claims during a briefing at the White House on May 13.

The department’s top employment and training official, Suzan LeVine, recently previewed that at least some of the funds will be used to pilot an unemployment technology initiative with states.

Democratic leaders of Ways and Means, which oversees the unemployment system, applauded DOL’s implementation of the $2 billion.

“More must be done, which is why Ways and Means Committee Democrats are working on legislation to give DOL the full authority it needs to conduct adequate oversight, hold states to the highest standards, and root out discrimination,” Chairman (D-Mass.) and Rep. (D-Ill.) said in a statement.

The worker-shortage narrative, however, has made Republicans on Capitol Hill unlikely to back any measure that would lead to more workers getting jobless benefits. And they’re much more likely to blame access disparities on fraudulent claims being rightfully denied than on any state stacking the deck against applicants of color.

That suggests the only imminent action on this issue will come from DOL’s administrative authority to identify and remove racially motivated barriers that cause workers of color to have claims denied at disproportionate rates.

“Two-billion dollars is going to be very helpful in starting to put things on track,” the DOL official said, “but you don’t erase hundreds of years of inequality in a day.”

The commission’s current makeup—a Republican majority led by a Democratic chair—helps explain why the EEOC was MIA when the administration’s regulatory agenda came out June 11.

The so-called unified agenda outlines an administration’s regulatory program for each federal agency, yet the plans are non-binding. Not being in the mix doesn’t change an agency’s ability to roll out new rules, but the partisan disagreement that led to the EEOC’s absence suggests a lull in agency rulemaking is possible until the commission shifts to Democratic control next year.

“A new administration will have new priorities, and the regulatory agenda should reflect the new priorities, but having a Republican majority on the Commission makes that a challenge,” said Stuart Ishimaru, a former EEOC Democratic commissioner.

A number of rulemakings are expected from the EEOC, including regulations that would address incentives for workers to take part in company-sponsored wellness programs.

Tensions arose earlier this year over a draft of the agency’s regulatory agenda.

All three Republican commissioners believed some items were being delayed unnecessarily, including the wellness regulations, they told Bloomberg Law. The Republicans then voted for a public meeting on the drafted items, but no such forum took place.

“Despite our request, the regulatory agenda was withdrawn from consideration by Chair Burrows and the Commission therefore did not submit a spring regulatory agenda,” Republican Commissioner Andrea Lucas said in an email, referencing Democratic Chair .

Had the request been honored, the regulatory agenda would have been published, Republican Commissioner Keith Sonderling said.

“Although we may not always agree, my goal will always be to reach consensus where possible,” she said in an email. “The regulatory agenda provides a snapshot of the anticipated issues and general timelines for developing the EEOC’s regulatory policies, but is not binding on the agency and can change to address emerging or urgent issues.”

Years after the EEOC’s wellness-program regulations were litigated, employers may have to wait until 2022 or later for clarity on the issue. Lucas said the proposed agenda delayed the regulations “for several years.”

James Paretti, a former EEOC attorney and chief of staff to ex-Commissioner Victoria Lipnic, cautioned against reading too much into the agency failing to submit its plan.

“The regulatory agenda is useful to stakeholders to know what actions the agency is contemplating taking, but it provides little detail as to the substance of what the agency will do on a given action,” Paretti said in an email. “Equally important, while these agendas signal where an agency might be contemplating rulemaking, they are at best aspirational—many items have lingered on agendas repeatedly without action being taken.”

But the absence means some degree of transparency is lost, said Amit Narang, who focuses on the federal regulatory process for Public Citizen, a D.C.-based consumer advocacy group.

“I do find the regulatory agenda aspirational when it comes to the actual deadlines they put on there, but most of the time, the actual actions they list on there, there is a fair degree of certainty that they will be taken up by the agency,” he said.

Ben Penn: Last week we reported in this space that Senate Majority Leader (D-N.Y.) was expected to invoke cloture on DOL deputy secretary nominee Julie Su, a move that would have put her on the path to confirmation. That didn’t happen.

Before Schumer had a chance to file the procedural motion to bring Su’s nomination to the Senate floor, two Democratic senators left town to tend to ill family members, including Sen. (Mich.).

Su continues to face significant opposition from Republicans, meaning Schumer must have all 50 Democratic members present to call her name. Now, it’s unclear when that could happen. The chamber takes a two-week recess at the end of this week.