Ben Penn: Labor Secretary Marty Walsh’s opening days in office featured a reminder of the potential for clashes with the business lobby, as the Biden administration’s delay of the Trump-era gig contractor rule was challenged in federal court.

The former Boston mayor wasn’t in command of the U.S. Labor Department when it halted implementation of the Trump rule, which would make it easier for businesses to classify workers as independent contractors.

But now the new labor secretary has a high-stakes legal battle on his hands, along with ultimate responsibility for charting the Biden administration’s course on independent contractor status under the Fair Labor Standards Act and other pressing matters.

Walsh’s initial days at the helm last week were full of meetings with career and political DOL staff, including several briefings on the emergency workplace safety rulemaking that remains in purgatory. He declined to offer a timetable for its release when questioned Thursday, but the subject is sure to arise when he meets virtually with stakeholders in business and labor, starting this week.

Walsh has shown early signs that he’ll be a different type of leader than what DOL officials have grown accustomed to—from his blue-collar union background to skill in retail politics. But when Bloomberg Law caught up with him Thursday, following a tour of a preschool in Washington, D.C., Walsh didn’t show his hand on policy prescriptions, nor did he front as an expert on the many levers he can now pull as labor secretary.

“I really need to spend, I’d say, a good few weeks listening and understanding, and then moving forward after that,” Walsh said when asked about plans for settling in. “I mean, we’ll take action, too, but really listening to what we need to do.”

He wouldn’t specify a timeline for DOL staff to join him at the Frances Perkins Building. Walsh’s senior team and thousands of career staffers are working remotely—a change from the prior administration, when political personnel and senior career executives were directed to report to duty in person through much of the pandemic.

“We’re just going to kind of take it a day at a time,” he said, acknowledging there’s “still a lot of fear” and unknowns amid the vaccine rollout. “I think, as we get further along here, get more comfortable with it, we’ll get people in. But no one is being forced into the office; that’s not the right thing to do.”

His friendship with President has backers in organized labor optimistic he’ll be in the room when top White House economic decisions are made. Yet Walsh demurred when asked if he envisions wielding more authority than past labor secretaries.

“I view my role as whatever Joe Biden wants my role to be,” he said. “Obviously, I have a portfolio as the secretary of labor and I have good relationships with Gina Raimondo, the secretary of commerce. She was the governor in the state right below mine, so we’ve already had lots of conversations about how do we work with commerce and labor.

But does that mean Walsh will be a more influential labor secretary?

“It’s not about influence, it’s about doing your job. I’m certainly committed to doing my job,” he replied. “I think, if you do your job and you do it well, and you have results, that’s where your influence comes from.”

Austin R. Ramsey: There’s been talk about Congress including $86 billion in Biden’s stimulus package to rescue the most underfunded union-brokered pensions. In reality, an interagency working group will decide how much is needed to foot the bill.

Officials from the Pension Benefit Guaranty Corporation and the Labor and Treasury departments began holding meetings with stakeholders of multi-employer pension plans, as Democrats readied the $1.9 trillion stimulus bill to move through the Senate via budget reconciliation.

A consequence of the reconciliation process was a bailout for multi-employer pension plans that was scant on policy specifics.

“The process for implementing this could be very messy, because the law does not give us any parameters,” said Chantel Sheaks, vice president of retirement policy at the U.S. Chamber of Commerce. 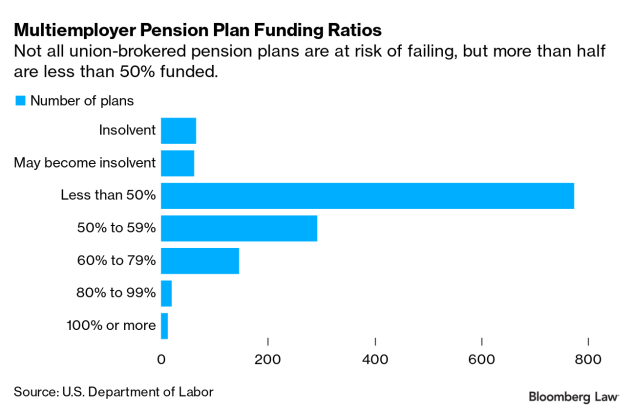 The law provides that the amount of special financial assistance eligible plans will receive “shall be such amount required for the plan to pay all benefits due” until 2051 “with no reduction in the participant’s or beneficiary’s accrued benefit.”

But the legislative language didn’t specify a dollar amount; the $86 billion figure comes from the Congressional Budget Office’s score of the bill.

Depending on the actuarial process the PBGC and its Cabinet-level partners land on, the actual cost could be a whole lot more or less than that, Sheaks said.

In addition to withdrawal liability protections for employers wishing to exit the worst of those troubled plans, discussions are also centering on whether financial assistance will be offset by a plan’s current assets, said Sarah Bryan Fask, a shareholder at Littler Mendelson in Philadelphia.

“In early July, the PBGC will issue its guidance that will determine exactly how much money an eligible fund can receive,” she said. “If—and despite the statutory language—the PBGC decides that the amount of the grant should be the benefits due through 2051 minus the assets the plan currently has, that will likely result in the plan becoming insolvent in 2051.”

A more generous approach that doesn’t take into account plan assets or investment performance might act as a “reset” for plans facing insolvency in five years or fewer, Fask said. And that could give Congress time to pass comprehensive multi-employer pension reforms that put the matter to rest for good.

Chris Marr: As state legislatures look to rein in governors’ emergency powers after widespread business shutdowns last year, some of the same lawmakers appear reluctant to bar employers from requiring workers to get vaccinated against Covid-19.

Proposals to prevent vaccine mandates or discrimination against people who aren’t immunized—mostly sponsored by Republicans—are largely being left to wither on the vine. And in a few cases, they’ve been voted down by the sponsors’ Republican colleagues. A worker at a Toyota plant in Buffalo, W.Va., receives a Covid-19 vaccine as part of a collaborative effort between the company, the West Virginia National Guard, and a health-care provider.
Photographer: Stephen Zenner/Getty Images

In the latter category, lawmakers in North Dakota’s GOP-led House last month killed a proposal that would have blocked anyone—including private employers—from asking about a person’s vaccination status, with limited exceptions. State representatives said the bill failed to make necessary exceptions for fire departments, law enforcement, and emergency medical services, for which federal law requires that workers get a hepatitis B vaccination.

“It says that I can’t ask my employees about their vaccination status, yet the federal government tells me that I have to,” Rep. Todd Porter (R), a paramedic and ambulance service owner, said during floor debate. “I have to ask. I have to know. I can’t violate OSHA.”

Measures in other states have failed to break through, as a recent survey suggested employers were hesitant to require the vaccine.