EEOC General Counsel|Happenings on the Hill

J. Edward Moreno: Karla Gilbride, ’s nominee for general counsel of the US Equal Employment Opportunity Commission, told Senators last week that she would seek consensus in her role as the civil rights agency’s top attorney.

On Wednesday the Senate Health, Education, Labor and Pensions Committee will vote on Gilbride’s nomination, alongside Jessica Looman, nominee for the chief role at the Labor Department’s Wage and Hour Division.

Both Gilbride and Looman are filling roles that have been vacant for nearly the entirety of the Biden administration. The EEOC’s general counsel post has been vacant since March 2021, when Biden fired Trump-appointed Sharon Gustafson.

Sen. Tommy Tuberville (R-Ala.) said the general counsel post “shouldn’t be a political job,” and asked Gilbride what she would do if she were under a different administration before the end of her four-year term.

“If I didn’t feel I could effectively serve the agency and its mission then I would step down and resign,” she said.

If confirmed, Gilbride—who faced little pointed questioning from Republican senators—would be joining the agency after the EEOC’s Republican majority voted to shift litigation power away from the general counsel to the commission. It remains unclear if the EEOC will reverse that decision if it secures a Democratic majority this year with the nomination of Kalpana Kotagal to the commission.

EEOC Commissioners Janet Dhillon and Keith Sonderling recently published an op-ed in the Wall Street Journal saying there was an “administrative power grab” afoot at the agency. Specifically, the two Republican commissioners—notably not joined by their colleague, Andrea Lucas—accused career staff of withdrawing lawsuits disapproved by the majority, which they call “an administrative veto.”

When asked about the claims asserted in the op-ed, Gilbride emphasized her desire to reach a consensus with commissioners and career staff.

“If I have the opportunity to serve as general counsel I would work closely with the commissioners and attempt to gain consensus,” she said. “I would follow what the current delegation of authority is in respect to seeking commission approval for engaging in new litigation.”

Biden nominated Kotagal in April to replace Dhillon, whose term expired in July. In May, the same panel deadlocked on her nomination, forcing an extra procedural step before full Senate consideration, which has yet to take place.

It’s unclear if Gilbride’s nomination will go more smoothly considering she would not be in a position to make policy or shift the balance of the commission. 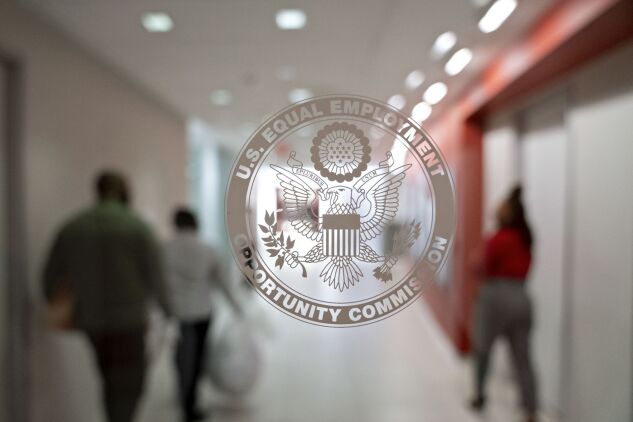 Lawmakers will take up the nomination of Karla Gilbride as general counsel to the US Equal Employment Opportunity Commission this week.
Photographer: Andrew Harrer/Bloomberg

Paige Smith: With the clock ticking before the November midterm elections, Congress isn’t slowing down with labor matters on Capitol Hill. Lawmakers are again focusing on nominees and policy items this week after having successfully avoided what would have been a fraught situation if railway workers had gone on strike.

In addition to Gilbride, the Senate HELP Committee will also consider Jessica Looman to serve as the top wage regulator at the Labor Department—the Biden administration’s second choice for the post after David Weil was voted down on the floor in March.

Labor watchers will be eyeing this vote closely. It could go smoothly, teeing Looman up for consideration by the full Senate, but it could also take a similar route to Weil’s doomed bid, with the committee vote ending in a draw. If the second option comes to pass, Looman’s nomination would require an additional procedural vote before it could proceed for a final confirmation vote.

And more votes could mean more delays overall for a position that’s key to the administration to implement substantive workplace policy. It isn’t going out on a limb to say that Labor Secretary Marty Walsh will be hoping for the more straightforward first option.

On the House side, the Education and Labor Subcommittee on Health, Employment, Labor, and Pensions is holding a Wednesday hearing aimed at “Examining the Administration of the Unemployment Insurance System.” The jobless aid claim system has been closely scrutinized after the peak of the coronavirus pandemic left laid-off workers waiting months to access benefits. In response, one of the emergency Covid-19 bills gave the Labor Department $2 billion to help shore up the system, so both chambers of congress have been focused on oversight.

It’s also timed as Michele Evermore, the policy expert who’s been helping lead the Labor Department’s unemployment insurance modernization office, is set to depart next month. It’s a key vacancy at an agency currently under the microscope.