Ben Penn: It’ll hardly come as a surprise that when building trades union presidents had face time with President in the oval office last week, they encouraged him to craft a robust infrastructure package, creating as many well-paying union jobs as possible.

Labor leaders came out of the meeting enthusiastic about the opportunities to partner with the Biden administration. Still, a deeper look at what transpired behind closed doors underscores the legal limits that may imperil any Biden effort to “build back better” primarily with unionized workers.

One of the more specific asks, Dean said, was for the White House to consider strengthening a 2009 executive order signed by former President Barack Obama that allowed federal agencies to require project labor agreements, or PLAs, on large public construction contracts. He said Biden and Harris made no assurances other than that they’d take it under advisement.

A PLA is a prehire pact with at least one union that sets employment terms and conditions for all workers on a building project, regardless of whether their employers are unionized or nonunion contractors.

Former President Donald Trump never acted on the business lobby’s request that he toss the Obama EO, a testament to the building trades’ influence on the prior administration. But part of the reason the order still stands today is that structural loopholes prevented unions from seeing much benefit from it. Federal agencies can still easily avoid awarding contracts with PLAs.

“It can be bureaucratized into oblivion,” Dean said of the order.

The order states that “executive agencies may, on a project-by-project basis, require the use of a project labor agreement by a contractor” when such an agreement advances the government’s interest in procurement economy and efficiency and when it’s consistent with law.

Government-mandated PLAs are the subject of years of legal battles and state legislative jockeying. At issue is whether they run afoul of the National Labor Relations Act. Even with Biden’s blue-collar union roots, it’s not clear whether the White House is willing to revive this war by bolstering the 2009 order.

As the administration pivots from Covid-19 relief to infrastructure, Biden will need to back up his vague commitments to “good union jobs” with details. Agreeing to unions’ wishes for a stronger PLA executive order is one way to do that.

The Ironworkers’ Dean acknowledged that the “softer language” in the 2009 order boiled down to “that’s what the lawyers would allow.”

He quickly added, “But sometimes you’ve got to hire a new lawyer.” 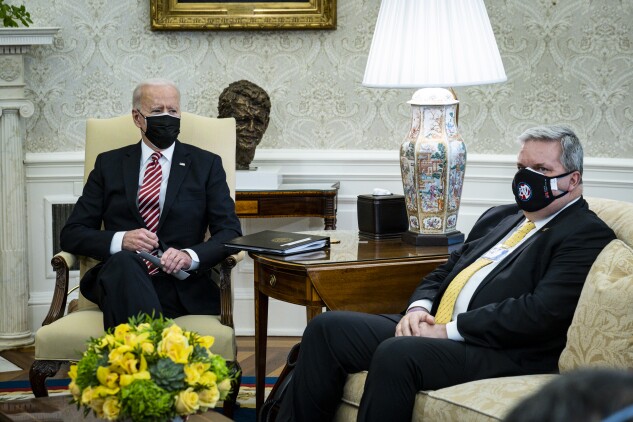 Paige Smith: Republican EEOC Commissioner Andrea Lucas recently voted with Democrats Charlotte Burrows and Jocelyn Samuels for the first time since joining the panel last year. The vote signals that while Republicans have the majority on the U.S. Equal Employment Opportunity Commission through at least July 2022, some items will likely see bipartisan support, and there’s no guarantee that Lucas will vote in lockstep with her GOP colleagues.

She voted with Samuels and Burrows to support a brief urging a U.S. appeals court to revisit a decision that could make it harder for older workers to prove they faced age discrimination, an agency spokesperson confirmed. This is the first time she’s sided with the Democrats on the commission, outside of unanimous votes, a spokesperson for Lucas confirmed.

The brief cuts at a question of statutory interpretation of the Age Discrimination in Employment Act. The U.S. Court of Appeals for the Sixth Circuit threw out a bank teller’s discrimination claims because she failed to prove that age was the sole reason she was fired, not that it was one of multiple reasons. The EEOC, along with the National Employment Lawyers Association and the AARP Foundation, requested a review of that interpretation.

Lucas said in an email that she supported the brief “because it accurately articulated the law, rejecting the conflation of but-for causation under the ADEA with sole causation, in line with decisions of the Supreme Court on both the ADEA and but-for causation in general over the last 45 years, the en banc Sixth Circuit, and other circuit courts.”

Older workers must prove under federal age bias laws that “but for” their age, discrimination wouldn’t have occurred. But there are different interpretations of “but for” causation. The EEOC said in its brief that the Sixth Circuit conflated “but for” causation by requiring that it be the only cause, and “not merely a determinative cause” of the bank teller’s termination.

Former Labor Department attorney Adam Pulver said that cases involving age and disability discrimination often don’t break on the same partisan lines as cases involving other forms of bias, adding that this issue of how “but-for” causation is interpreted is an important one for the EEOC since it impacts “nearly all” of the agency’s work.

“It would be helpful to courts to have the EEOC’s view of whether antidiscrimination statutes require plaintiffs to show that discrimination is a but-for cause or the but-for cause of an adverse action,” he said in an email. Pulver is now with the consumer advocacy group Public Citizen.

Ben Penn: Dan Koh, the former chief of staff to Boston Mayor Marty Walsh, is set to start Tuesday as the chief of staff at the U.S. Labor Department, according to several sources briefed on the matter. This puts Koh on course to reunite with Walsh, who’s now widely expected to get Senate confirmation as labor secretary in the next few weeks.

Koh would provide Walsh a familiar and trusted face as he gets up to speed in managing a big Cabinet agency that’s been operated for the past month by experienced labor policy hands who’ve never worked with the mayor.

A chief of staff has a close relationship with a secretary, so it makes sense that Walsh would turn to someone who held the same title for him at City Hall for almost four years.

The DOL chief of staff can play a critical role, with control over agency operations, stakeholder access to the secretary, and White House coordination.

After earning undergrad and advanced degrees from Harvard, Koh changed his career trajectory multiple times, including stints as chief of staff to Arianna Huffington at the Huffington Post, a campaign for U.S. Congress in 2018 (which he lost by a hair in a primary recount), and most recently as chief operating officer at a tech startup. He’s also interned for Major League Baseball and for the late Massachusetts Sen. Ted Kennedy.

The only thing missing from his resume is experience getting in the weeds on labor policy or federal government operations. There’s no reason to think Koh won’t be a quick study. But considering the deputy secretary nominee Julie Su would also be a newcomer to Washington if she’s confirmed, it’s worth asking where is the seasoned administrative pro who will take the lead in executing Biden’s Labor Department agenda on time?