Editor’s Note: After nearly a decade reporting on labor and employment issues, Ben Penn is starting a new job for Bloomberg Law, covering the Department of Justice. Ben has anchored “Punching In” since its inception, and his dogged reporting has been an essential part of our overall coverage. We’re excited to see him break news on the DOJ beat.

Rebecca Rainey joins Bloomberg Law today as our senior reporter covering the Department of Labor. Reach her at rrainey@bloombergindustry.com.

Ben has done an immense amount of reporting for “Punching In” over the years, so we wanted to give him a chance to share his thoughts as he punches out.

Ben Penn: From the start, my contributions to this column have been only as good as the sources I’ve relied on for information. Fittingly, my swan song reflects interviews with more than two dozen of the most influential people shaping workplace policy inside and outside the Biden administration.

I was struck by how these well-connected individuals often answered my questions with ones of their own.

The takeaway: The Department of Labor has made progress on numerous fronts in 2021, yet enters the Biden administration’s second year without a defined identity or clear authorities among senior leadership. Labor Secretary Marty Walsh and his team are still working to establish a detailed, forward-looking agenda to execute President ‘s goals of improving workers’ lives while strengthening organized labor.

Few question the talent and expertise inside the department. The problem is when stakeholders or other government entities meet with DOL officials, they’ve come away unclear about who has authority over what.

Nearly everyone I spoke to expected this to change soon, though if Walsh were to run for Massachusetts governor—Politico reported last week he was weighing that very question—there would be far more ambiguity about the department’s policy trajectory.

Walsh dodged questions about his interest in running during a Bloomberg TV interview Dec. 3. “I have a lot of work to do here at the Department of Labor,” he said.

There’s an understanding around Washington—even among Biden critics—that Walsh and his team were dealt a rough hand that’s challenged their bandwidth and ability to coordinate efforts and roll out a four-year plan.

Pandemic response has been all-encompassing, with two rounds of high-stakes Biden-directed emergency workplace safety rules to combat Covid-19, the latter of which is mired in litigation before the Sixth Circuit and continues to drain resources. Political wrangling on Capitol Hill is holding up critical enforcement and job-training dollars, and subagency leadership nominees have bogged down in the Senate.

Another huge issue is the majority of the department’s employees still work from home, including agency principals who’ve had limited opportunities to collaborate in person.

To be sure, the department has succeeded in undoing multiple business-friendly Trump actions and started the process of hiring and training investigators to overcome crippling attrition, while taking a more assertive federal approach to pandemic recovery.

The department is by no means in the clear on any of these fronts, but signals suggest more affirmative policy moves are in store for 2022. Expect more pro-worker regulations, tougher enforcement initiatives, and enhanced worker standards attached to federal spending.

The upcoming release of the department’s next regulatory agenda and the White House’s plan to boost union organizing will guide the way forward. 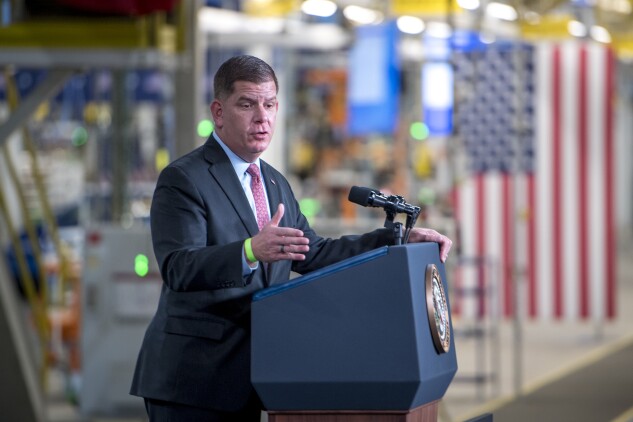 One of the glaring questions insiders hope to see answered in 2022 is who in the DOL hierarchy has clout?

When Walsh took control in March, unions were encouraged that his friendship with Biden and roots in organized labor would give him more gravitas and greater ability to empower workers than past labor secretaries. Sure, he’s joined a picket line and is always chatting up union presidents, but it’s too early to tell whether Walsh can deliver major wins for labor.

I’m told Walsh is the ultimate arbiter of major DOL decisions, despite any notions to the contrary due to all the time he’s spent in Boston and traveling the country. He’s clearly focusing on areas of personal strength: pitching the president’s priorities to the public, while entrusting his team to get into the weeds.

Yet the White House has kept Walsh and his advisers on a short leash and been heavily involved in daily operations, especially pandemic matters, several sources said.

That’s not a huge departure from prior administrations, but the presence of former deputy and acting Labor Secretary Seth Harris at 1600 Pennsylvania Ave. as a deputy assistant to the president on labor issues adds an intriguing element. While his portfolio doesn’t give him oversight control over DOL, Harris knows the department inside-out and is exerting influence—or, as some say, meddling—on issues of importance to the White House.

Word has it that Su, an icon to worker rights’ activists, has been hands-on in brainstorming with career and political staff, regularly engaging with leaders at the Wage and Hour Division, other DOL subagencies, and outside worker advocates—always searching for ways to innovate.

But the notion of Su functioning as a “shadow secretary”—which prompted Republican warnings during her confirmation proceedings—hasn’t materialized. Those on the left who are pushing for bolder moves, such as on enforcement and overtime rulemaking, are turning to Su, hoping she will champion their cause.

Nanda, a former Democratic National Committee CEO who holds the department’s No. 3 slot, is viewed as a voice of reason in the business community, willing to hear out their concerns. In a sense, that makes Nanda similar to her boss; Walsh has worked to avoid tipping the scales too heavily against employers.

She’s only been on the job since July, but early indications are that Nanda is inclined to take a more cautious stance, borne out of a desire to implement regulations capable of surviving court challenges, people close to the matter said.

There’s no evidence Su and Nanda aren’t in harmony, but their dynamic is worth monitoring in 2022, as it could reflect broader tensions inside the Democratic Party.

The department next year will face increasing pressure from progressives and unions to take stronger actions, while moderates will seek balanced decisions that have a greater chance of surviving the next time a Republican controls the executive branch.

If David Weil is confirmed for his second stint as wage-hour administrator, he’ll join Su as an official who gives advocates hope for aggressive moves. But Sen. Joe Manchin (D-W.Va.) is holding up consideration of Weil, an enforcement tactician who is persona non grata in the gig economy and franchising industries.

A photo illustration shows an image of David Weil, the nominee to lead the Wage and Hour Division, superimposed over an image of Labor Secretary Marty Walsh.
Photo Illustration: Jonathan Hurtarte/Bloomberg Law; Photos: Courtesy of David Weil and Getty Images

Relationships atop the DOL hierarchy will be instrumental as an affirmative agenda takes shape next year. Get ready for action on a forthcoming proposal that’s attracted minimal public discourse but is a big deal for construction companies and labor unions.

The department is nearing release of a proposed rule to modernize the Davis-Bacon Act’s construction wage standards, several sources said. Quietly, this rulemaking has been a source of intense lobbying from the construction industry and building trades unions, who were invited to contribute ideas to inform the proposal’s scope.

Organized labor’s building trades wing—where Walsh got his start—has high hopes the rulemaking will correct decades of inadequate implementation of the law, which governs wage and benefits levels for workers on federally funded building projects.

I’m told this highly complex undertaking—now being reviewed by the White House regulatory office—will be sweeping. It may help the building trades secure membership gains via the plethora of new projects financed by the bipartisan infrastructure law.

On the legislative front, DOL agencies are developing plans to get the most value from the influx of enforcement and job-training cash the Build Back Better Act would provide, if enacted. With or without Weil, that money will allow the Wage and Hour Division to beef up its work to police worksites for pay violations, including by ramping up emphasis on independent contractor misclassification.

The Occupational Safety and Health Administration will be advancing a rulemaking to safeguard workers from heat exposure, a massive initiative that cuts across multiple industries.

The Office of Federal Contract Compliance Programs has been eerily silent this year even though it has jurisdiction over workplace equity, a top White House priority. It is gearing up to make a bigger splash cracking down on pay disparities by gender and race at federal contractors.

And the Employment and Training Administration, after doling out grants and launching pilot programs to make long-needed improvements to the unemployment insurance system, will now be tested to show that state-run jobless-aid programs are ready for the next economic downturn. That’s a heavy lift.

The agency also will be implementing Biden’s call to expand the apprenticeship system by rewarding workers of color and women—not just the predominantly White male building trades workers who traditionally make up the bulk of DOL-authorized apprentices. Oh, and somehow they must do that without alienating Biden’s tough-to-please building trades allies.

Some of these goals won’t be fully realized over the next year, but the department’s ability in 2022 to lay plans for action will determine whether priority agenda items are completed during Biden’s term.

As I sign off to embark on the DOJ beat, let me say how appreciative I am of the opportunity to report for an audience who cares passionately about and works tirelessly to elevate the importance of labor and employment issues.

I owe the majority of my professional development in journalism to the experience of telling stories about workplace policy and regulatory battles. Thank you for reading, and for engaging with me.

Editor’s Note: “Punching In” will publish Dec. 13 and Dec. 20 and then take a two-week hiatus for the holidays. We’ll be back in your inboxes for a new year starting Monday, Jan. 10.