Chris Opfer: The Labor Department Thursday is slated to release new weekly unemployment insurance claims data that will give us the clearest picture yet of the impact the spread of coronavirus is having on the job market. It won’t be pretty. Nearly 140,000 workers in Ohio alone filed new claims for jobless benefits over five days last week.

Businesses shuttered as result of coronavirus response efforts and those facing plummeting demand already are weighing their options. That includes whether to make furloughs or layoffs, and how to manage the legal implications of those decisions. Business lawyers are looking to the Labor Department for clarity, especially when it comes to the federal Worker Adjustment and Retraining Notification Act.

“There’s been some outreach to the Labor Department to see if they will clarify a few basic concepts regarding the WARN Act,” Seyfarth Shaw partner Josh Ditelberg told me.

The law generally requires employers to give their workers 60 days’ notice ahead of mass layoffs. It also imposes steep penalties such as back pay and fines on companies that don’t live up to that responsibility.

Ditelberg said employers are looking in particular for specifics on the scope of exemptions to those obligations for layoffs caused by “unforeseen business circumstance” or natural disaster. He also said they could use some insight on what happens if a layoff initially designed to be temporary becomes permanent as the situation changes.

Any feedback from the Labor Department is likely to come in the form of guidance, rather than notice-and-comment rulemaking. Although those sorts of subregulatory missives have fallen into disfavor in the Trump administration, employers facing lawsuits for alleged WARN Act violations could rely on guidance to mount a defense under the law’s “good faith” protection.

Ben Penn: Which Labor Department subagency is under the most pressure to respond to the coronavirus outbreak’s employment effects this week—the Wage and Hour Division, or the Employment and Training Administration? I’m calling it a tie.

In addition to potentially issuing WARN Act updates, ETA is coordinating with state workforce agencies to help them absorb a massive spike in jobless benefits claims. The agency will need to issue more guidance to ensure the projected 2 million-plus Americans filing for unemployment aid for the first time get their checks without delay or improper denials.

Something to watch: Washington state is asking the Labor Department to relax its requirement that states hold off on reporting unemployment insurance claims data to the public until after ETA releases its weekly nationwide jobless claims numbers on Thursday mornings. The department had to remind states last week of this embargo after a few state agencies spilled the beans on their soaring benefits claims, which could move markets. The DOL might be pressured into waiving the embargo, given the increasing demand from the public and policymakers for real-time data, rather than the week-long lag in the DOL report.

The Wage and Hour Division is under increasing pressure to write rules and guidance implementing the paid family and sick leave portions of the virus relief package. A virtual town hall the agency hosted Friday for stakeholders on the process turned into 90 minutes of questions and comments, largely from the employer community. The law has multiple ambiguities that are left to WHD to clarify, and businesses want that info immediately to make operating decisions.

The rules may not come out until just before the law’s April 2 effective date. The agency, however, could start offering guidance this week on which small businesses and health-care providers will be exempt, and whether large businesses can count their contractors as employees to qualify for the 500-employee minimum for exclusion. Some companies may even do an about-face on their refusal to be called the employer of an affiliated entity’s workers (!).

Something to watch: How lenient will the WHD be with employers who aren’t complying with the paid leave amendments when the law takes effect? Enforcement didn’t come up at the town hall, but if the confusion on the call is any indication, it will eventually. The agency announced a non-enforcement period for good-faith employers during the first 30 days after the law takes effect, but this sea change to payroll processes will likely lead to all sorts of complications.

As WHD veteran Michael Hancock told me, “As sure as the sun comes up in the east, you’re going to find employers who aren’t complying with this.”

Jaclyn Diaz: Senate Labor Committee members and (R-Ga.) found themselves in hot water Friday after news reports revealed they and—and two other lawmakers—dumped a massive chunk of their personal investments after receiving closed-door briefings on the coronavirus threat.

The lawmakers completed their sales at a time when the Trump administration was downplaying the potential impact of the virus in the U.S. and before the stock market tanked in the wake of the pandemic.

Two other members of the Intelligence Committee, Sen. , a Democrat from California, and Sen. , an Oklahoma Republican, also sold stock after the briefings, according to Bloomberg News.

Burr is chairman of the Senate Intelligence Committee, which receives frequent briefings about threats facing the country. In a tweet Friday, he invited the Senate Ethics Committee to open a review of the transactions, adding that he “relied solely on public news reports” to inform his Feb. 13 sales decision. 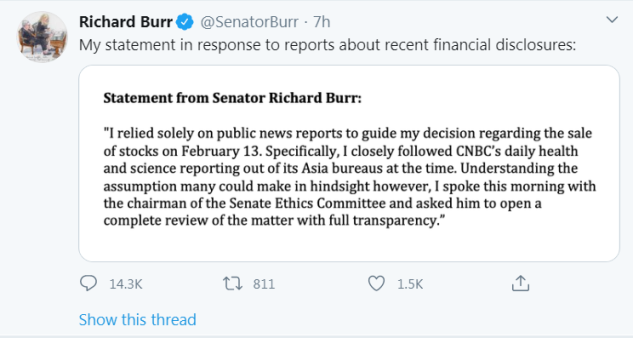 Loeffler said the criticism of her stock sales is “baseless.”

Should Burr decide to hit the road ahead of his planned departure from the Senate in 2022, it could have major implications for the Health, Education, Labor and Pensions Committee.

The committee already faces a big loss of experience with GOP members at the end of the congressional term with the departure of panel Chairman , , and . Former , who previously led the Employment and Workplace Safety subcommittee, retired at the end of 2019. Loeffler replaced Isakson in the chamber and on the committee.

It’s unclear who will lead the committee after Alexander’s departure, but Burr has the most seniority. Next in line after Burr: and .

We’re punching out. Daily Labor Report subscribers can check in during the week for updates. In the meantime, feel free to reach out to us. See you back here next Monday.