Ian Kullgren: Publicly, union leaders remain adamant that they’re committed to getting the PRO Act to President ’s desk in its entirety. But privately, they’ve been taking a different tack with the sweeping labor law overhaul.

Leading Senate Democrats, as we reported last week, agreed to add a major part of the PRO Act—monetary penalties for employers who violate workers’ union rights—to the $3.5 trillion budget reconciliation bill that Majority Leader (D-N.Y.) wants his conference to rally around by Wednesday.

The thinking was that the monetary-penalties proposal is the part that has the best chance of passing muster with the Senate parliamentarian, who must ensure that elements of the reconciliation measure pertain to budgetary matters.

That proposal would amount to a major change to the National Labor Relations Act—and a huge win for unions—if it were to become law. It would allow the government for the first time to fine employers for violating workers’ rights.

The National Labor Relations Board under the PRO Act could levy up to $100,000 in penalties for repeat offenders, though it wasn’t clear if Democrats plan to adjust what’s added to the budget bill.

Yet union leaders insist they want all of the PRO Act passed, in one form or another.

“This legislation is absolutely critical in its entirety,” Liz Shuler, secretary treasurer of the AFL-CIO, told reporters last week. She said the union federation isn’t willing “to start negotiating away” parts of the PRO Act, which the House approved in March but can’t seem to clear the Senate’s 60-vote threshold for consideration.

Shuler said much “strategizing” is taking place about ways to get the full PRO Act passed into law, adding that the AFL-CIO this week would redouble its grassroots mobilization to squeeze senators. (Events are planned at the offices of all 100 senators, a spokesman added.) 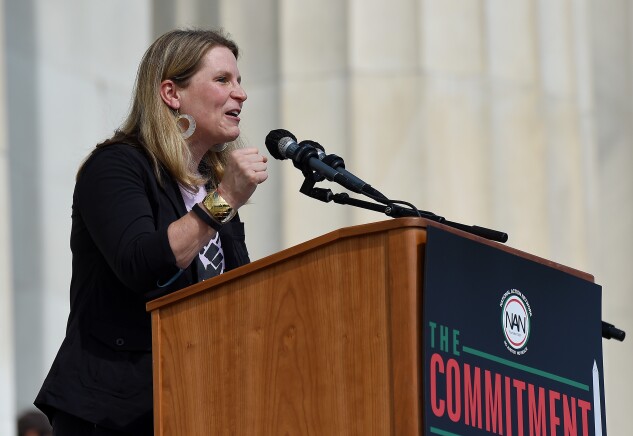 Behind the scenes, however, the AFL-CIO and the Service Employees International Union have been pressing Senate Democrats for months to include pieces of the PRO Act in a budget reconciliation bill, according to a person with direct knowledge of the talks who requested anonymity to divulge private conversations.

Democratic staffers have used a “traffic-light” system to rate the likelihood of the parliamentarian clearing various PRO Act measures, the source said, with green being the most likely and red being the least.

The penalties measure was generally seen as doable, while other parts of the PRO Act—such as applying the stricter “ABC” test to questions of worker misclassification—were regarded as less certain, the source added.

Several other pro-worker measures were still under consideration for the reconciliation mix, according to a Democratic staffer and two union sources who also spoke on the condition on anonymity to dish on private talks. They include enforcement money for labor agencies and a tax credit on union dues.

AFL-CIO Communications Director Tim Schlittner, asked to clarify the federation’s position, said it looks “forward to seeing what steps our champions can take through reconciliation to strengthen workers’ rights as we continue to fight to make the full PRO Act the law of the land.”

Ben Penn: As businesses across the U.S. embark on return-to-office plans, the principal federal agency regulating employers is prepping in-person mandates for its 15,000-person workforce.

U.S. Labor Department staffers will get an online briefing July 22 from a boss most of them have only met virtually.

Labor Secretary and his newly confirmed deputy, Julie Su, will host a town hall for employees and contractors nationwide to “discuss the critical work and priorities for the coming months, and discuss our plans for increasing onsite presence in our workspaces,” DOL Chief of Staff Dan Koh wrote July 15 in an internal email obtained by Bloomberg Law.

Su, in her first full week as the department’s operational chief, is taking on the delicate role of shepherding staffers back to the Frances Perkins Building in Washington (and satellite offices in every state). 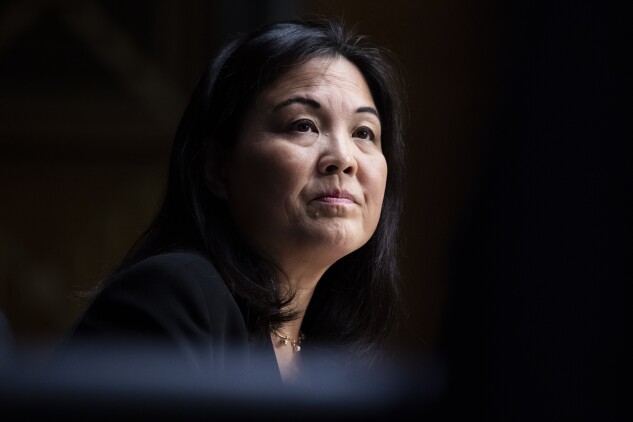 Department management met July 12 with unions representing DOL employees in D.C. and at field offices across the U.S. Union officials were briefed on details of a tentative three-phased return plan, with targets of 50% occupancy by Sept. 7, 75% by Oct. 7, and 100% by Nov. 8, according to a union official at the meeting.

Those who need accommodations would have flexibility, added the source, who spoke on condition of anonymity to address ongoing deliberations.

It’s still being hashed out which workers will be required to report to the office in the first two phases, although those who’ve been on “weather and safety leave” because their jobs can’t be performed remotely will be part of the first group returning in September, according to the union official and a DOL source briefed on the plan.

A DOL spokesperson didn’t comment when asked to discuss the plan.

A slew of policy and regulatory changes have been made over the past six months, and marching orders from the top seem to be registering in the field. Private attorneys say they’ve observed a decidedly more aggressive enforcement posture from DOL litigators and investigators, for instance.

The department’s return-to-office push suggests an increase in coming months in actions to regulate and investigate American workplaces.

For one, many of the department’s political leaders have worked from home since President took office, executing on the White House’s wide-ranging labor agenda. But perhaps the biggest factor rests with the Senate.

Walsh can now rely on leadership from Su and DOL’s No. 3 official, Solicitor Seema Nanda, who also was confirmed last week.

More DOL subagency leadership nominees are in the queue for Senate approval, including David Weil, the choice to head the Wage and Hour Division; he’s slated to get a committee vote July 21.