Ian Kullgren: A new era will dawn tomorrow at the International Brotherhood of Teamsters when longtime president James P. Hoffa hands over the reins to Sean O’Brien, a one-time ally who obliterated Hoffa’s preferred successor in the November election.

That made for a tense transition over the past four months, with incoming staff regularly stonewalled by Hoffa’s inner circle, said Brian Rainville, O’Brien’s incoming chief of staff. For weeks, staffers coming on board were denied ID badges to roam the building and were only allowed to talk to union staff in the presence of the Teamsters’ in-house counsel, giving what were intended to be casual conversations the aurora of a deposition.

The tension came to a head this past Tuesday, when Rainville and Fred Zuckerman, the incoming general secretary-treasurer, went to get a first look at the president’s office with two people from the building’s IT department and were unceremoniously turned away.

“We got stopped at the door and told, ‘No, this isn’t a good day,’” Rainville said. “Basically, ‘You can come back on Tuesday when you take over.’”

“Everything that we’ve experienced has just been incredibly petty,” he added.

Hoffa’s people didn’t exactly appreciate Rainville’s jabs, accusing him of lying or either having memory problems. Rainville and other members of O’Brien’s team already visited the president’s office in February, Teamsters spokesman Galen Munroe said. Rainville and Zuckerman were turned away last week, he said, because they showed up unannounced while Hoffa’s office was being packed up.

John Murphy, a Teamsters international vice president under Hoffa, shot back that O’Brien’s team had agreed to the restrictions for the sake of an orderly transition, and to comply with Covid-19 protocols.

“I am just bewildered why they are asserting these things to the press,” Murphy said. “What’s their motivation? Is it to paint a negative impression as the Jim Hoffa administration winds down? I don’t know, but it’s just bizarre.”

A senior Teamsters official, speaking on the condition of anonymity, shared a description similar to Rainville’s, of the tense atmosphere inside the building. In recent weeks, the official said, Hoffa cut off all communication with staffers he saw as too accommodating to O’Brien and has refused to speak to the incoming president directly.

Rainville stressed that the vast majority of the union’s staff have been helpful and cooperative—or in some cases, they wanted to be but had to follow orders from Hoffa’s closest advisers. The transition team was able to talk to enough people—at least 50—to get a sense of the organization’s inner workings, he said. Some conversations, too, became less tense as Hoffa’s departure neared, he added, as employees became less worried about retaliation.

“On Tuesday, we’re going to parachute in there—all of a sudden we’re going to magically appear like we’re in Star Trek,” Rainville said. “It’s like, I don’t even know where the pencils are because we haven’t been allowed in the office.” 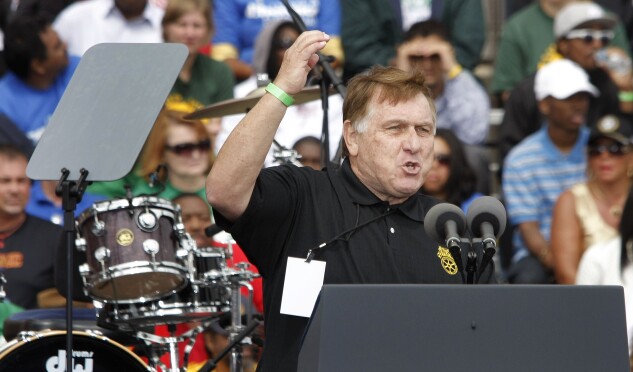 Bruce Rolfsen: States with their own versions of the federal Occupational Safety and Health Administration are rolling back their Covid-19 mandates.

On Monday, officials in Virginia, the first state to adopt a Covid-19 specific workplace safety standard, could make a final determination that the virus no longer poses a “grave danger” to workers, clearing the way for that worker protection rule to be revoked by the end of March.

Virginia’s revocation would follow in the wake of other states—including California, Oregon, and Washington—that earlier in February and this month eased up on requirements for workers in most non-health-care jobs to wear masks while indoors.

The Virginia Safety and Health Codes Board is likely to favor repeal. The board met Feb. 16 and, by a 7-3 vote, decided to proceed with the 30-day public comment period needed before a standard can be stricken. Two factors led to its review:

Newly sworn-in Republican Gov. issued an executive order upon taking office Jan. 15 instructing the board to tell him whether the standard was still needed.

The measure also contains a sunset provision that says if federal OSHA withdraws its Covid-19 emergency standard for the health-care industry, then Virginia’s board would need to decide if the state’s rule was still needed. OSHA announced Dec. 27 it was no longer enforcing the emergency health-care standard and would issue a permanent rule within nine months.

Meanwhile, California’s emergency Covid-19 rule remains in effect, most recently revised and readopted on Dec. 16 by its Occupational Safety and Health Standards Board.

But, Gov. Gavin Newsom (D) on Feb. 28 suspended the rule’s requirement that workers in most industries who aren’t fully vaccinated wear masks while indoors or in work vehicles. However, the mandate continues for workers in health care, corrections, homeless shelters, and public transit. The current iteration is set to expire May 6, but California officials have said the rule will be extended in some form.

Kevin Bland, a shareholder with Ogletree, Deakins, Nash, Smoak & Stewart P.C., said the standards board and California’s Division of Occupational Safety and Health haven’t said what changes will be proposed. Many employers would prefer a rule requiring businesses to include Covid-19 measures be included in the illness and injury prevention programs Cal/OSHA already mandates, rather than in a separate standard.

Oregon’s permanent Covid-19 standard continues to be enforced. But on March 14, that state’s OSHA said it, too, intended to revise the rule’s face-mask requirements to bring the standard in line with the Oregon Health Authority’s guidance generally limiting mask mandates to facilities where direct patient care is provided.

“As of June 22, Michigan employers were expected to follow what federal OSHA was doing,” said Jaclyn Giffin, a shareholder with Littler Mendelson P.C. But while federal OSHA withdrew the health-care standard on Dec. 27, Michigan didn’t propose reinstating its own rule.