Ben Penn: An undercard Senate vote last week provided a rare survey of the chances for bipartisan agreement on labor provisions in a big-ticket infrastructure package, as eight Republicans joined Democrats to preserve wage standards in the China competition bill.

Before the Senate approved the nearly quarter-trillion-dollar U.S. Innovation and Competition Act on June 8, it voted 58-42 against an amendment introduced by Sen. (R-Texas) that would’ve barred prevailing wage protections from applying to federally funded semiconductor manufacturing construction projects.

The effort to shoot down the Cornyn amendment marked the first time in years the full Senate voted on including Davis-Bacon Act prevailing wages in new legislation—and unions certainly took notice.

Widespread inclusion of Davis-Bacon in legislation stemming from President ‘s infrastructure plan is probably the building trades’ top legislative priority—they want to ensure the plan finances good-paying jobs rather than an industry race to the bottom on worker conditions.

Signed in 1931, Davis-Bacon requires companies awarded federal construction projects to pay workers at least the prevailing wage and fringe benefits corresponding to other similar projects in the same locality.

Several construction union officials said they viewed the amendment vote as an encouraging sign for the tougher battles ahead.

The building trades union lobby made a point to praise the Republicans by name who broke ranks to sink the amendment: (Alaska), (Ohio), (Mo.), (Fla.), (Mont.), (Alaska), and (W.Va.). An eighth GOP senator, of Louisiana, also voted down the amendment but didn’t receive construction union recognition.

Look for Democrats and construction unions to woo those eight senators in their quest to get strong worker-protection language added to the infrastructure and jobs package the White House is negotiating on Capitol Hill.

When the full Senate voted on the China bill—with prevailing wages included—it passed by a vote of 68-32, with even Cornyn approving it. But while the amendment vote provided a barometer of sorts about Davis-Bacon in the Senate, don’t expect any infrastructure and jobs bill to run on a parallel track.

First, the urgency to compete with China drove last week’s bipartisan display. Republicans are being much more stingy during talks for a compromise on an infrastructure measure, and Biden’s call for a price tag north of a trillion dollars is a major sticking point.

And infrastructure talks are stalling for several reasons, not the least of which is that Biden has the option to push ahead with only Democratic votes using a budget maneuver. The politics on the prevailing-wage part of the puzzle may get overshadowed by other progressive labor policies unions want to see attached to federal infrastructure spending. Neutrality mandates that would block employers receiving government dollars from opposing a union organizing drive, for instance, would be more likely to unite the GOP in opposition. 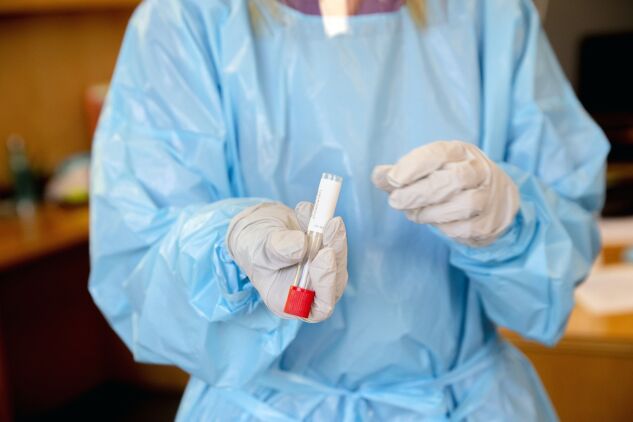 A phlebotomist processes a Covid-19 test at the Intermountain Regional Landfill office in Sandy, Utah, on July 2, 2020.
Photographer: Kim Raff/Bloomberg

Medical removal is what the Occupational Safety and Health Administration calls the requirement to remove an ill worker from a heath hazard regulated by the agency, said Dan Kaplan, a partner with Foley and Lardner in Madison, Wis.

For example, factory workers with high levels of lead in their blood could be assigned to jobs where lead isn’t present, Kaplan said.

In the Covid-19 standard, OSHA requires employers to allow workers with suspected or confirmed Covid-19 infections to stay away from work with pay until they’re no longer infectious according to Centers for Disease Control and Prevention guidance.

What raised red flags among attorneys is the OSHA requirement that the employer pay the ill worker up to $1,400 a week, regardless of whether the infection was work-related or the exposure took place away from the job. The standard doesn’t limit the number of weeks the payments continue.

The employer can count toward that $1,400 other benefits the absent worker receives, such as sick and paid leave, the standard says.

Ben Penn: Majority Leader (D-N.Y.) is expected to file a procedural motion this week that would advance deputy labor secretary nominee Julie Su to the Senate floor and set up a final confirmation vote by week’s end, say three sources familiar with the process.

That would be welcome news to Su’s supporters in the labor, civil rights, and Asian-American communities—many of whom advocated for her to land the U.S. Labor Department’s top job rather than serve as No. 2.

Su, the California labor secretary, was picked four months ago to be DOL’s deputy, but she’s been stuck in a holding pattern. Nearly eight weeks have passed since the Senate labor committee cleared Su for full Senate consideration.

Su’s reputation as a fighter for worker rights and her role overseeing an unemployment benefits system in California that’s been plagued by fraudulent claims have placed her on the GOP hit list. It’s possible all 50 Senate Republicans will vote against her, sources tracking the process say. This complicated the scheduling process for Schumer, who may need all 50 Democrats in town for the vote, plus Vice President as the potential tiebreaker.

If confirmed, Su’s arrival would mark the first sub-Cabinet official requiring Senate approval to join Walsh at DOL. With the labor secretary focused on big-picture Biden priorities, such as selling Congress on the jobs plan, a deputy is traditionally charged with overseeing day-to-day operations at the Frances Perkins Building.

DOL outlined an active regulatory agenda Friday, and Walsh made some big assurances on job training and other economic recovery efforts in his House testimony two days earlier. It would be Su’s job to make sure the department executes on schedule.