That’s one of the biggest takeaways from the initial batch of comments filed with DOL ahead of this evening’s midnight deadline for public input on the proposal.

Management-side behemoth Littler Mendelson’s lobbying arm, the Workplace Policy Institute, called on the department to add a safe-harbor provision to the rule, according to a comment letter it filed this weekend on behalf of gig-economy clients.

Companies want language added to the final rule that would allow them to provide independently contracted workers with paid-sick leave, jobless aid, health insurance, and other benefits, without that serving as proof of an employment relationship.

WPI filed the letter on behalf of Littler’s clients, which include a who’s who of gig companies as well as emerging startups and Fortune 100 corporations, but none of the companies formally signed the document.

The companies are using the WPI umbrella to cloak their efforts to influence the rulemaking. This strategy allows them to hedge their bets, because they’ll want to preserve their ability to forge a working relationship with a potential Biden administration—which would be inclined to move in the reverse direction on gig-worker issues.

While the gig companies want to stay in the background, it’s worth noting that the WPI letter cites a U.S. Chamber of Commerce white paper co-written in January by Alex MacDonald, who was a Littler associate at the time before jumping ship to become Instacart’s in-house employment counsel.

One way of looking at the request is that it reveals more about what businesses want to see from Congress than from DOL.

Any shield the department could provide through an interpretive rulemaking would help companies avoid an employee-misclassification charge under federal wage-hour investigations, and judges would have the option of adopting the safe harbor in private litigation. But that wouldn’t come close to giving businesses the type of protection that federal legislation would provide.

The business lobby and Republican lawmakers have been unsuccessful in efforts to secure a liability shield through Covid-19 relief legislation, including a GOP proposal to protect companies from getting hit with the “employer” tag when they extend benefits, such as paid leave, to independent contractors.

Gig workers had filed many of the comments in the docket as of this weekend, reflecting a sharp divide over the proposal.

Some rideshare drivers told DOL they support the rule because they want to maintain the flexibility of independent-contractor work. Others were outraged the department would advance a rulemaking to make it easier for companies to lock in their contractor status.

An analysis from the Economic Policy Institute will reinforce those legal arguments. It estimates the rule will lead to $3.7 billion per year transferred from workers to businesses, based on an estimate that the rule would spur 5% growth in use of independent contractors, which EPI economist Heidi Shierholz described as a conservative figure.

Littler won’t be the only business lobbying group to champion the rule. The National Federation of Independent Business, however, was the only other major national trade association that had weighed in as of this weekend.

OSHA conducted 23,840 inspections during fiscal 2020, the preliminary data showed. In fiscal 2019, OSHA made 33,393 inspections, according to the agency’s final data for that year. 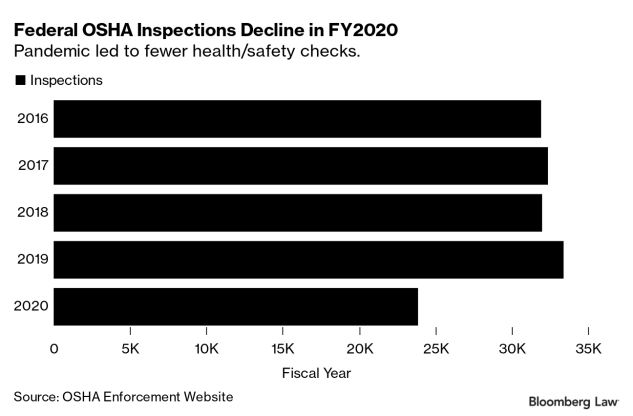 The agency has yet to release its final inspection numbers for fiscal 2020. Usually, the final inspection count is less than the preliminary number because the latter includes some cases that aren’t officially counted, such as visits to workplaces that go out of business.

Covid-19 was the primary reason for the decline. OSHA leaders told field staff to prioritize inspections of high-hazard workplaces and fatality cases, and to protect themselves against infection.

The agency conducted 14,005 inspections during the first five months of fiscal 2020. But the numbers dropped off starting in March, when the pandemic struck. OSHA closed the last seven months of the fiscal year by performing just 9,835 inspections.

Much of the decline was in checks of construction sites, where there were 11,959 inspections, compared with 18,774 the year before. The agency averaged about 200 building-site checks each week during the summer, roughly half its traditional weekly tally.

OSHA’s inspections of health-care employers and meatpackers are an integral part of the debate over the agency’s response to the pandemic.

Labor Secretary was pressed on protections for workers in meatpacking plants during an Oct. 20 interview on Fox Business television.

“As we have made clear from very early on, we have a number of regulations that are legally binding,” he said. “We will bring cases when they are violated.”

Ben Penn: The gears are in motion to ensure a smooth transition in labor and employment policy if Democratic presidential nominee wins next week.

Scores of people have been discussing personnel lists and policy and regulatory priorities for months, several Democratic sources and Obama DOL alums said.

And while the key to that discussion is who Biden would tap for labor secretary if he defeats President a new leader for OSHA would rise to the top of the list of sub-Cabinet personnel appointments for DOL, those involved in informal Biden transition preparations said.

That’s because of Biden’s commitment to tasking OSHA with virus-related functions that the agency has not implemented under Trump—establishing an emergency temporary standard of enforceable Covid-19 safety standards for employers; issuing a permanent infectious disease standard; and doubling the number of OSHA inspectors.

All of that takes time, and OSHA’s rulemaking process is notoriously laborious. But expect a Biden DOL to prioritize these policies on Day 1, the sources said.