Rebecca Rainey: The U.S. Department of Labor last week announced a new pact with the Department of Transportation that it says will ensure that workers in jobs created by the bipartisan infrastructure law will have the “free choice to form a union.”

The agreement provides the first glimpse into the roles federal agencies will play in implementing the roughly $1 trillion infrastructure law (Public Law 117-58), and how the administration’s pro-union policies will shape its rollout.

The DOL and DOT agreed to use their resources to expand apprenticeship opportunities and work with local government and private businesses who can help train workers needed to operate the projects created under the infrastructure bill, while also attaching strict job quality standards to any grant funding.

For DOT this would also mean “encouraging” project-labor agreements and local hires in its projects as well as developing “mechanisms to support unionized workers and ensure that workers have a free and fair opportunity to unionize.”

But the Associated Builders and Contractors, a national construction industry trade association, says one of the largest hurdles the administration will face in its infrastructure plans is actually finding the skilled workers to complete the projects and that promoting pro-union policies in its implementation of the bipartisan law will increase construction costs and prevent a large swath of businesses from bidding on DOT projects.

The group estimates that nearly 650,000 additional workers will be needed to meet the demand for labor in 2022.

“If the Biden administration is serious about creating opportunities for a diverse and local construction workforce, it should abandon PLA schemes, which disproportionately exclude nonunion local, minority-, veteran- and women-owned businesses and their employees from bidding on and building public works projects,” said Ben Brubeck, ABC’s vice president of regulatory, labor and state affairs.

But Greg Regan, president of the Transportation Trades Department, AFL-CIO, which represents 36 transportation unions, said he views the agreement as a further affirmation of the administration’s support of unions, adding that it offers unions an important role in the infrastructure investment process.

“I do think there’s a responsibility on the labor side to work with those grant applicants to develop sort of a pathway forward, a plan for what we’re going to get out of this money,” Regan said in an interview, noting that grant applicants that work with unions will likely look more attractive to the federal government.

“We can go in as partners to make sure that we are building that full scope of what can be achieved through this funding,” he said. 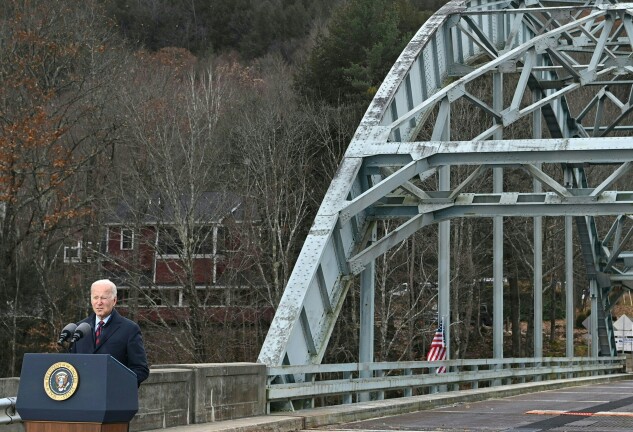 U.S. President Joe Biden speaks on infrastructure at the NH 175 bridge over the Pemigewasset River in Woodstock, N.H, on Nov. 16, 2021.
MANDEL NGAN/AFP via Getty Images

Lifetime income options are evolving into a centerpiece strategy financial firm lobbyists are backing on the Hill before legislation slows ahead of the midterm elections, and they’ve garnered support from key Labor Department officials.

Traditional pension plans are withering under tough funding standards and shaky markets in the U.S., shifting the responsibility for adequate savings from plan sponsors to plan participants invested in 401(k)s. Without the guarantee of monthly pension checks in the mail, policy advocates are turning to life insurance products such as annuities to fill that gap.

“There are a lot of important stakeholders in this system, and I think there is a sense that, across the board, everyone is coalescing behind these critically important questions right now,” said Acting Assistant Labor Secretary for Employee Benefits Ali Khawar in a speech last week to the American Academy of Actuaries.

Groups such as the Insured Retirement Institute, American Retirement Association, and ERISA Industry Committee are throwing their support behind a sequel to the 2019 SECURE Act (Pub.L. 116–94) dubbed SECURE Act 2.0 (H.R. 2954) that would make it easier for plan sponsors to offer in-plan default annuity investments and plan participants to access them without facing penalties.

“We are optimistic that Congress will move bipartisan legislation this year,” said Institute President and CEO Wayne Chopus. “Elected leaders from both parties understand that retirement anxiety and insecurity is an issue for many people, and that drives a willingness to find and enact solutions.”

DOL regulators, meanwhile, are focused on bolstering protections ahead of any wave in annuity purchases. The Employee Benefits Security Administration began enforcing a Trump-era regulation last month that forces financial professionals to adjust their business plans to qualify for annuity advice exemptions. Without them, financial professionals couldn’t earn commissions on the advice they provide.

But that may not be the end of advisory regulation. Khawar, who heads up the employee benefits agency, said he’s especially focused on the client-adviser relationship.

“In spite of a lot of changes and a lot of efforts that have been made over the years by various regulators, including the Department of Labor, it continues to be the case that you may or may not be getting advice that you can rely on if you’re getting advice about your retirement assets,” he said.

The agency has said it intends to move the goalposts on fiduciary financial advice once more this year.