The U.S. Court of Appeals for the Ninth Circuit in San Francisco is pictured in 2017. U.S. Department of Labor attorneys will present oral arguments before the court this week in a case involving the employee status question.
Photographer: Justin Sullivan/Getty Images

Ben Penn: Oral arguments that begin Tuesday before the Ninth Circuit in San Francisco will mark a rare moment for the U.S. Department of Labor.

It’s not often that the department’s Office of the Solicitor presents oral argument before an appellate panel on a Fair Labor Standards Act case, let alone on the most contentious topic in wage-hour law: whether a worker is an employee or an independent contractor. Even more uncommon is for that to happen during an administration’s first year, before it’s fully articulated a position on the issue.

The case stems from a 2015 Wage and Hour Division investigation; it involves a Nevada telecom company’s appeal of a district court decision that held workers were employees under the FLSA and had been misclassified as independent contractors. The appellant, Wellfleet Communications, allegedly owes up to $1.5 million in overtime pay and minimum wages to some 1,300 call center workers.

This litigation has flown under the radar, although DOL listed it among its most significant pending cases in a 2020 transition document.

That has something to do with it not being a prime contender to set a benchmark compared with other possible precedential decisions on worker status docket-watchers are monitoring, such as the multiple plaintiff-bar-driven misclassification allegations against gig companies.

For complicated reasons, even Wellfleet’s attorney said an appellate panel ruling on whether to affirm the lower court’s employment determination may not reverberate beyond a subset of telecom industry workers who sell services by phone and get paid by commission, not by the hour.

Yet the proceedings are nonetheless worthy of review by anyone searching for guidance on what constitutes an employer’s willfulness when there’s a conflict between federal and state statutes on wage-hour liability. Willful conduct often triggers the assessment of double damages and a third year of back pay.

Wellfleet argues it acted in good faith because it was relying on a state agency’s prior conclusion that its workers were properly classified as independent contractors and exempt from Nevada wage-hour law.

DOL attorneys have taken issue with the thoroughness of that state audit, which the department said didn’t rely on worker interviews.

This scenario may resonate with companies grappling with conflicting interpretations and multi-factor tests on worker status, depending on the region or state law.

“It’s very possible that we’re going to see some sort of opinion that practitioners are going to be citing in their state law cases,” said Eric Lloyd, a partner at management-side law firm Seyfarth Shaw in San Francisco, who’s been following the Wellfleet suit.

But with little case law to clarify that concept, willful misclassification “is kind of murky,” Lloyd added. “I could see, depending on how the court comes out, the defense bar or the plaintiffs bar latching on to the court’s discussion about willfulness.”

Paige Smith: The price-tag pressures engulfing the $3.5 trillion budget package at the center of President ‘s legislative agenda have created a circle-the-wagons moment inside the Beltway.

Democratic lawmakers, industry groups, and advocates will be defending their priorities anew after Biden last week re-linked bipartisan infrastructure legislation to the wide-ranging framework for social spending and climate response.

For some union leaders and clean energy advocates, one priority is to ensure inclusion of specific policies in the tax and social spending bill that would encourage organized labor buy-in on “green” union jobs.

They point to House proposals in Democrats’ sprawling reconciliation vision that link labor protections to clean energy tax credits. They see this as a key element of Biden’s mantra of “green” union jobs being a linchpin of future climate policy. 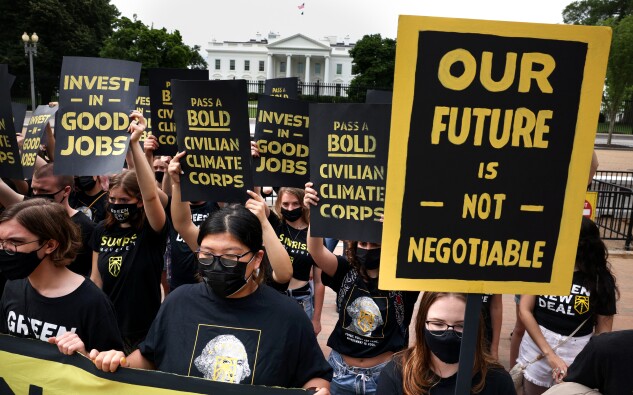 Climate activists demonstrate outside of the White House in June, calling for a climate-friendly infrastructure plan.
Photographer: Kevin Dietsch/Getty Images

Clean-energy tax credits have previously been a carrot, but linking labor protections to them is new, said Jason Walsh, executive director of the BlueGreen Alliance, a group focused on uniting labor unions and environmental organizations.

A base tax credit covers 6% of project costs for qualifying clean energy projects of a certain scale. But under the House’s model, up to 30% of a project’s cost could be covered if certain labor standards are met, such as paying workers a local prevailing wage and ensuring registered apprentices comprise a portion of the workforce, Walsh said.

“In the past, and to date, they have not included labor standards and domestic content standards that we have historically applied to other big federal investments in things like public works,” Walsh said, referring to the tax credits. “We are changing that for the first time.”

But how to squeeze them into the final measure?

Ohio Democrats Sen. and Rep. said at a press event last week that organized labor must be prioritized as investments are made in climate-friendly alternatives.

“We can go full bore into the new economy, we can go into these industries of the future, and we can also make sure we are lifting up and rebuilding the middle class through these union jobs,” Ryan said.

However, union commitment to “green” jobs has been impeded by the uncertain long-term potential of employment in the sector, said Marc Boom, director of federal affairs at the Natural Resources Defense Council.

Part of that wariness has to do with the unpredictable nature of clean energy tax credits, which have been the “biggest federal policy driver of clean energy jobs,” Walsh said.

“You can’t create a career if you don’t know that there’s going to be a job at the end,” Boom said at the event with Brown and Ryan. “These are long-term, 10-year investments that are going to provide a lot of certainty.”

How Civil Rights Lawyer Kelly Dermody Fights for ‘the Underdog’