Rebecca Rainey: Does the labor market need to cool off to tame rising inflation? The Biden administration, unions, and Democrats say no. But those who control interest rates, the Federal Reserve, disagree.

The labor market is a key factor in the equation of how we measure our economic health. Friday’s employment report from the US Labor Department showed that businesses added 261,000 new jobs in October—above expectations—and earnings went up from the month prior. While unemployment ticked up slightly to 3.7%, the report suggests that the labor market is still tight. Another DOL report released earlier last week showed 10.7 million job openings at the end of September, suggesting that employers are still struggling to find workers.

Federal banking officials say that the labor market must soften before it can start easing back on interest rates. Higher unemployment means that businesses aren’t fighting to find workers, and in turn, don’t have to raise wages to attract employees. Simply put, the reduction in wages lowers the amount of money Americans have to spend, reducing demand, and as a result, prices.

“I’m one of the people that hold out saying that we’d like to see the unemployment rate continue to stay where we are, even go lower if we can, and work on other ways through this inflationary pressure that people are feeling,” Walsh told Bloomberg TV on Friday.

When pressed on what mechanism the administration can use to lower inflation while also keeping unemployment low, Walsh said his job is to make sure workers have opportunities to get into well-paying jobs through workforce development.

He added that his role and responsibility when it comes to inflation is to ensure supply chains are moving forward, including by being involved in the high-stakes union negotiations ongoing with ports and railroads.

“Those are things that I’m focused on right now, forward looking, to make sure that we’re doing everything we can so that we don’t add to the inflationary pressures that people are feeling in America.”

“It’s not clear that it’s just the workers that need to feel some pain, they’re not the only players in fact, in some ways they have less decision” than companies, said Groshen, who also served as commissioner of the US Bureau of Labor Statistics and vice president of the Federal Reserve Bank of New York.

When making policy decisions about inflation, “there’s a tendency to focus on the worker side, but the the business side is also very important in all of this,” she said. “They set prices. They decide how they’re going to organize their work. They make the decisions.”

Be Nice, Kids: The DOL’s Office of Workers’ Compensation Programs is releasing rules on how the public should interact with agency staff in response to “inappropriate behavior.” The office administers several workers’ compensation programs, including benefits under the Black Lung Benefits Act.

The agency said while most people interact appropriately with OWCP workers during the claims process, “there have been recurring instances of improper and abusive conduct” directed at staff “by a small minority of individuals,” the office said in a Federal Register notice scheduled for publication Monday. The expectations outlined by the office include that claimants or those representing them will not act “in a threatening or disrespectful manner” toward staff, or threaten harm to influence the outcome of a claim. 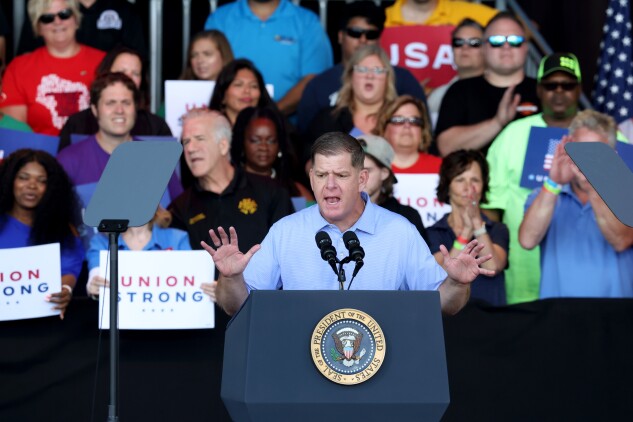 Chris Marr: Voters in a handful of cities will decide Tuesday whether to increase their local minimum wages in unusually specific ways targeting the gig economy, health-care companies, or hotels.

Among them, two California cities could require private-sector hospitals and clinics to pay their workers at least $25 an hour if voters approve ballot measures there—part of a broader union-backed push on health-care worker wages in California.

The $25 wage question made it onto this year’s ballots in Duarte and Inglewood City, Calif., but could show up on future ballots in other locales. The city councils of Downey, Long Beach, and Los Angeles each approved a similar health-care worker wage as city ordinances, but then suspended the ordinances after opponents submitted petitions demanding voter referendums.

“Setting a healthcare worker minimum wage is a big step towards fixing the staffing shortages, burnout and overwork that we are all facing,” the SEIU’s United Healthcare Workers West wrote in an update about the California initiative, which the union says is a step toward winning a $25 minimum wage for all California health-care workers.

Opponents of the ballot questions say they would create disparities within the health-care workforce because they cover only private-sector entities and not public hospitals and clinics such as university hospitals, leaving out a large percentage of medical workers.

Hotel workers in Laguna Beach, Calif., also could be in line for a targeted minimum wage increase if voters approve a ballot measure. That proposal would set an $18 minimum wage for hotel workers, raise it in steps to $22 by 2026, and then adjust it annually based on inflation. The measure also would require hotels to provide safety protections for workers, including panic buttons they can use to call for help if a hotel guest becomes threatening or violent with them.

Across the country in Portland, Maine, voters are considering a broader minimum wage proposal but with some unusual industry impacts. A question on Portland ballots proposes to gradually raise the minimum wage to $18 by 2025—from the current $13—and to apply that minimum to independent contractors as well as tipped workers, eliminating the tip credit that restaurants commonly use to pay a lower wage to servers.

Gig economy companies have been urging local voters to oppose the measure. Because companies such as and classify drivers as independent contractors, not employees, minimum wage laws in most cities and states don’t apply.

The local measures are part of an increasingly ambitious push for higher state and local minimum wages after Hawaii became the first this year to pass a statewide $18 minimum wage law, set to fully phase in by 2028.

Voters in two states also are considering statewide minimum wage proposals this Election Day. A Nebraska measure would raise the minimum wage to $15 by 2026, and Nevada’s proposal would set the wage floor at $12 by 2024 while ending a two-tier system that lets employers pay $1 less per hour if they offer health insurance.

To contact the reporters on this story: in Washington at rrainey@bloombergindustry.com; in Atlanta at cmarr@bloomberglaw.com