Rebecca Rainey: Management-side attorneys say that one of the factors included in the US Labor Department’s new proposed worker classification test has parallels to California’s “ABC test,” which presumes workers are employees instead of independent contractors under the law.

The DOL last week released a proposal outlining the legal test it will use to decide when workers should be classified as employees who are afforded protections under the Fair Labor Standards Act, or independent contractors who aren’t covered by the law.

One of the six factors the Biden administration wants to use as part of the analysis is “whether the work is an integral part of the employer’s business, and skill and initiative.”

Management-side attorneys say that factor is similar to the “B” part of California’s worker classification test, which requires, in part, “that the worker performs work that is outside the usual course of the hiring entity’s business” in order to be considered an independent contractor.

California’s stringent classification test, signed into law in 2019, assumes a worker is an employee unless they can satisfy the three prongs of the test. The law drew a $200 million ballot measure campaign funded by and in 2020 seeking carve-outs for app-based workers, who, along with other businesses and freelancers, feared the worker classification law would mean they would have to reclassify their workers as employees.

In the proposed rulemaking, DOL explained that if the employer “could not function without the service performed by the workers, then the service they provide is integral,” adding that “courts also look at whether the work is important, critical, primary, or necessary to the employer’s business.”

“When you consider the way organizations function today, only the smallest companies attempt to do everything necessary in order to run a company. Companies focus in on their core function or their core mission. And they use a variety of others in order to supplement what it is that they have to do to run a business,” Lotito told Bloomberg Law in an interview.

Timothy Taylor, who served as a deputy solicitor of labor during the Trump administration and is now an employment and litigation attorney at Holland & Knight, said that Biden’s proposed factor doesn’t have “quite the weight that the B does in the ABC test.”

“They’re both asking that question: Is this one of the principal things that the business does and is the worker involved in that?” Taylor explained in an interview. But unlike the ABC test, the integral piece is only one factor considered in DOL’s proposed test, “so even if it weighs in the other direction, it’s not necessarily dispositive of independent contractor status.”

DOL noted in its proposal that not every factor considered in the test “will ‘align’ with the ultimate result in many cases.” 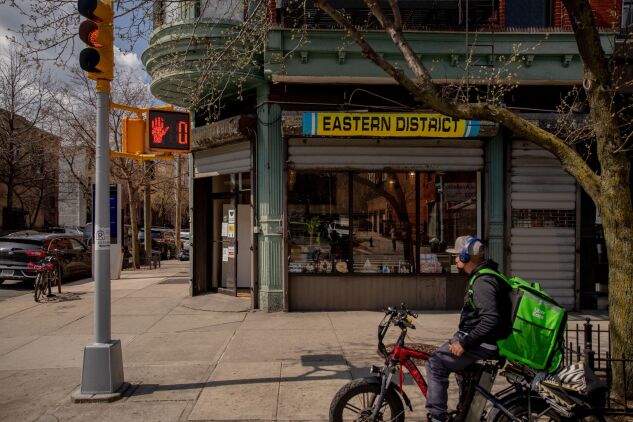 An Uber Eats delivery courier rides an electric bicycle past the Eastern District convenience store in the Park Slope neighborhood of the Brooklyn borough of New York.
Photographer: Amir Hamja/Bloomberg

Bruce Rolfsen: OSHA under the Biden administration has been on an executive-level hiring spree, of sorts.

At the close of the Trump administration in January 2021, half of the agency’s 18 career service regional administrator and headquarters director positions were filled on an acting basis.

As of October, just one of the senior level jobs is held on an acting basis, returning the Occupational Safety and Health Administration to about the same spot where it was at the end of the Obama administration in January 2017.

Filling the positions has been a priority for OSHA Administrator Doug Parker since his arrival nearly a year ago.

“The importance is that you have stable leadership,” Parker said in an interview with Bloomberg Law. “You have somebody that everyone understands has a mandate to lead and is not there on a rotational basis.”

The stability, in turn, results in a more motivated staff and agency, he added.

Department of Labor Deputy Secretary Julie Su told Bloomberg Law in a written statement that one of the department’s top priorities is increasing “the capacity of agencies like OSHA so they can be more impactful and responsive to workers’ needs.”

“We have been committed to filling leadership positions at OSHA as well as working to build up the inspectors who enforce workers’ rights on the ground,” Su said.

Most of the recently filled positions went to OSHA staffers already serving in senior roles.

Andrew Levinson, who as acting or deputy head of the Standards and Guidance Directorate was often OSHA’s frontman for Covid-19 rulemaking hearings, is now in charge of the directorate with no “acting” next to his title.

And Kim Stille, who was administrator for the Kansas City-based Region 7, became head of the Directorate of Enforcement in Washington.

But there are also new faces.

Leading OSHA’s Director of Whistleblower Protection Programs is Lee Martin, who prior to arriving at OSHA was director of the Internal Revenue Service’s whistleblower office.

And overseeing Region 8 in Denver is Jennifer Rous. She was the Navy’s civilian director of industrial hygiene and occupational health before joining OSHA.

The leadership assignments are senior executive service posts, the top rung of the federal civil service. Openings are advertised and competitively filled.

Parker said the hiring process to fill the only post held on an acting basis—the Region 10 administrator in Seattle—is underway.