Austin R. Ramsey: US retirement plan sponsors are finding themselves caught in the middle of a bitter showdown between Fidelity Investments Inc. and the US Labor Department over the role of cryptocurrency investments in 401(k) plans.

Both Fidelity and the DOL’s Employee Benefits Security Administration are digging in their heels, and employers are feeling stranded with no good options.

Boston-based Fidelity is among the nation’s largest 401(k) providers with a total of more than 32 million US worker participants and roughly 22,000 participant employers. Its new Digital Asset Account plan option, announced just weeks after EBSA’s warning, would allow participants to add as much as 20% of their retirement savings into digital currencies, subject to employer approval and additional constraints.

“At a very challenging time in the labor market, when organizations are struggling to keep employees—particularly millennials and other young workers—Fidelity is nudging employees to tell plan sponsors, ‘I want that. I want cryptocurrency,’” said Matthew Eickman, national retirement practice leader at Prime Capital Investment Advisors LLC in Omaha, Neb. “But plan sponsors will have to answer to the Labor Department for that, not Fidelity.”

EBSA officials have met with Fidelity corporate executives at least once and had a “cordial but candid exchange of views” said Acting Assistant Secretary for Employee Benefits Ali Khawar this week.

“We didn’t leave that conversation feeling comfortable that all our concerns were unfounded, unwarranted or resolved by what they’ve done,” he said.

Fidelity believes EBSA should revoke its new guidance. A company spokesperson said the new crypto product is a “responsible solution that allows plan sponsors to decide how to meet the demands of mainstream interest in crypto and provide their employees with exposure to digital assets within their 401(k).”

But the vitriol isn’t doing anything to aid plan sponsors who have a tough choice to make, said Eickman. 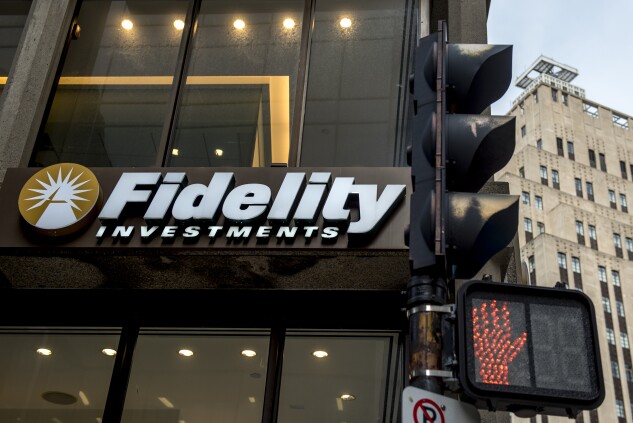 A Fidelity Investments branch in Boston’s Financial District is pictured on July 11, 2017.
Photographer: Nicholas Pfosi for The Boston Globe via Getty Images

“This is clearly intended to stir up participant demand,” he said. “Every time a headline over the last two weeks referenced the potential ability to have cryptocurrency in a 401(k) plan, that was in line with what Fidelity was hoping for. It would be natural for Fidelity executives to sit around a room and say, ‘Listen, there’s going to be blow-back from this, but we don’t answer to the DOL on this.’”

The Labor Department says it has “grave concerns” about the new plan offering, but its regulatory authority doesn’t extend as far as service providers to retirement plans. EBSA will only be able to investigate plan sponsors that opt to sign up for Fidelity’s new plan.

The agency regulates the standards of care plan sponsors use to choose investments on behalf of participants and beneficiaries. That strict, fiduciary standard requires a careful review of the risks any one investment or asset class may pose.

The agency’s strongly worded guidance (CAR No. 2022-01) suggested that cryptocurrency, still in its infancy, may be too volatile for most retirement plan investors. Those sponsors who choose to ignore the agency’s warnings could face an “investigative program” requiring them to “square their actions with their duties of prudence and loyalty” to participants.

Paige Smith: Workers across the country are joining in union organizing efforts as longtime pro-labor lawmakers support them from Capitol Hill. House Labor Caucus members Mark Pocan (D-Wis.) and Ro Khanna (D-Calif.) shared with Bloomberg Law what they’re most closely watching from workers at companies like , , , and .

Pocan said the “grassroots” nature of organizing has been what’s impressed him most. Workers at Raven Software, a subsidiary of the embattled games-entertainment company Activision Blizzard Inc. located in Pocan’s district, are voting to unionize and the ballots will be counted Monday.

“This never was turf that labor really tried to organize” previously, he said. “Despite not having the PRO Act, seeing these successes just shows how much more significant they are.”

The Protecting the Right to Organize Act () the US House passed in March 2021 has lain untouched by the Senate.

Khanna’s focus is on organizing efforts in technology sectors, particularly because of his Silicon Valley district He said unions have the potential to “rebalance the economy,” though hedged that “we’ve got a long way to go.”

“While we have the most billionaires,” Khanna said, “we also have people who are bus drivers and food workers and warehouse workers, and the tech economy hasn’t worked for them.”

Workers at an Apple retail store in Atlanta next month will vote on forming a union, and others have since followed their lead. Khanna said he was encouraged by this action.

“Unionization brings a number of things—it’s not just higher pay,” he said. “It’s also more upward mobility, and a sense of racial diversity and inclusion, and giving workers a say in management positions. What is the path today to starting in an Apple store and becoming a senior executive?”