Chris Marr: Laws aimed at improving the employment prospects of people with criminal records could be set to spread next year in state legislatures, after three new states passed “clean slate” measures in 2022.

Advocates are pushing New York lawmakers to pass a bill early in 2023 that would automatically seal a person’s criminal record a few years after they’ve served out their sentence, with the time period varying based on the severity of the crime. It’s one of several states with active efforts to pass such a law. California, Colorado, and Oklahoma each passed clean slate laws this year, bringing the count to eight states, according to the Clean Slate Initiative.

A broad coalition is backing the multi-year New York effort, including community activists, labor unions, clergy, and business groups. JPMorgan Chase was among the supporters of a bill (S1553) that fell short of passing the New York legislature’s 2022 session.

Clean slate laws are meant to help people with criminal records—estimated at one in three Americans—access better jobs and housing that are often closed to them after a background check shows criminal history. While the New York bill faced some resistance from those who argued it would create public safety risks, its supporters say it would do the opposite, lowering the likelihood of repeat offenses.

“If you are concerned about recidivism, let people have jobs,” state Sen. Cordell Cleare (D), a cosponsor of the New York bill, said at a Dec. 1 rally urging legislators to make the proposal a top priority in January. “Most people who can support and feed their families and have a decent place to live don’t make those mistakes.”

The clean slate measures are akin to, but go beyond, the “ban the box” laws enacted in many states and cities, as well as via federal policy governing the hiring of workers under federal contracts. “Ban the box” requires employers to omit any criminal history question on initial job applications, but lets them ask candidates later in the hiring process. Clean slate laws, alternately, make it so that employers might not know about a job candidate’s criminal history because it won’t show up on background searches.

The exceptions to clean slate laws vary by state. In the New York bill, criminal history information would still be available to certain government agencies, employers hiring police officers, and rideshare companies that are required by state law to check the criminal histories of their drivers.

Although far from universal, business support for the measures is growing, driven in part by the need for more workers in the labor force.

“As we continue to recover from the pandemic, businesses are adapting to economic conditions and resuming their search for skilled workers,” Nan Gibson, executive director of the JPMorgan Chase PolicyCenter, said in written testimony to the New York legislature earlier this year. “By reducing barriers to employment for those with criminal records, we will be able to get more people back to work more quickly.”

Local approaches to the issue are getting traction as well. The Atlanta City Council earlier this year expanded its nondiscrimination ordinance to ban employment discrimination based on criminal history. 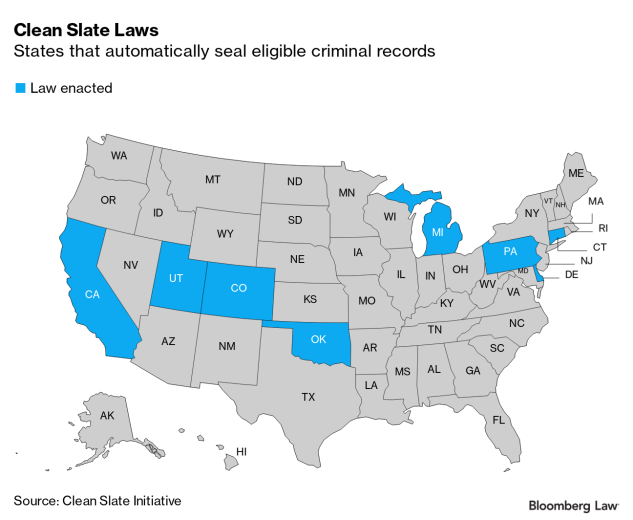 Robert Iafolla: Federal appellate courts are wading into legal controversies Monday that harken back to an earlier stage of the pandemic, as they hear oral argument in cases involving Covid-19 hazard pay and state law liability shields against coronavirus-related lawsuits.

Southern California Healthcare System Inc. will try to convince the US Court of Appeals for the Ninth Circuit to revive its lawsuit challenging Culver City’s now-defunct “hero pay” ordinance that required it to pay an extra $5 per hour to hospital workers.

SCHS, which operates a hospital in Culver City, seeks damages for an allegedly unconstitutional law that cost it $2.1 million. The ordinance was the city council’s gift to the Service Employees International Union-Healthcare Workers West, which represents hourly workers at the hospital, the company said.

The company said its hospital in Culver City was the only employer covered by the 2021 hero pay requirement. It alleged the law was preempted by federal labor law and violated the US and California Constitutions, including the Equal Protection Clause and Contracts Clause.

“The Ordinance is not a legitimate exercise of legislative authority,” SCHS said. “It is the misuse of public power to redistribute private resources solely on the ground that those who benefit exercised raw political power to obtain what they want.”

US District Judge Mark Scarsi, a Trump appointee, dismissed the lawsuit in January.

Culver City said it clearly had the power to regulate wages with the ordinance. The union said the “vague accusations” about acting improperly while advocating for the ordinance doesn’t change that none of the company’s claims passed the plausibility threshold of a motion to dismiss.

Judge Marsha Berzon, a renowned union-side labor lawyer before President Bill Clinton appointed her to the bench, is on the panel hearing the case. Trump-appointed Judges Ryan Nelson and Bridget Bade round out the panel.

Meanwhile, the Fifth Circuit will weigh a bid by workers to bring back their negligence lawsuit against Tyson Foods Inc. The meatpacking company knew the coronavirus was spreading in an Amarillo, Texas, plant, yet continued business as usual as workers contracted Covid, they alleged.

The lawsuit ran headlong into Texas’ Pandemic Liability Protection Act, which raised the bar on what plaintiffs must prove to win Covid-related claims. Dozens of states passed such liability shields earlier in the pandemic.

The workers said that Texas’ liability shield didn’t heighten the pleading standard, which they met. The judge was wrong on his preemption analysis, they said, since the meat inspection law doesn’t relate to worker safety and the executive order didn’t actually order meat companies to do anything.

Judge Carl Stewart, a Clinton appointee, will be joined by George H.W. Bush-appointed Judges Priscilla Richman and Catharina Haynes on the panel hearing the case.

To contact the reporters on this story: in Atlanta at cmarr@bloombergindustry.com; in Washington at riafolla@bloomberglaw.com