A barista cleans a milk frother inside a Starbucks Corp. coffee shop.
Photo by Victor J. Blue/Bloomberg via Getty Images

Ben Penn: The U.S. Labor Department rescinded the Trump-era joint employer test late last month, but without fully resolving the government’s handling of the business-friendly regulation. The administration must now reckon with a pesky case pending before a federal appeals court that has implications for Biden’s entire regulatory agenda.

A federal district court judge last year vacated the most significant aspects of the Trump measure, which narrowed the circumstances under which multiple companies share liability for wage violations. The prior administration appealed that decision after Election Day, and there’s still a chance the U.S. Court of Appeals for the Second Circuit will opine on the legality of the Trump DOL measure.

While the Biden DOL was working on repealing the rule, the Justice Department asked the Second Circuit in May to overturn the district court’s holding solely on the basis that states lacked standing to litigate. DOJ’s brief acknowledged that if the Labor Department finalizes a rescission, the issue “may become moot, making it unnecessary for the Court to resolve this appeal.”

But now that the department has completed its rollback, the administration has yet to decide if it wants to seek a dismissal of the appeal or roll the dice by allowing the Second Circuit to hand down an opinion that DOJ would hope—but couldn’t guarantee—only curtails state standing.

The appellate court could birth a zombie joint employer regulation—legally valid, albeit repealed. The business groups intervening in this litigation to defend the rule may try to seize on that scenario to revive a measure that protected companies from wage theft accusations. Or the panel could deem the dispute mooted by the repeal.

Biden attorneys intent on safeguarding future regulations from red-state legal attacks may be willing to risk the fate of DOL’s rollback. If allowed to stand, the Southern District of New York’s ruling that states had legal standing to sue could backfire on Democrats by supporting GOP states going after Biden rules.

“A district court decision from SDNY does not have the precedential weight of a decision from the Second Circuit, but SDNY is an important and influential jurisdiction and a big part of litigation strategy is making exactly these kinds of judgment calls,” said Bridget Dooling, a research professor at the George Washington University Regulatory Studies Center.

It’s common for agency regulators and Justice Department litigators to coordinate and sometimes butt heads on how to ask a court to proceed.

Dooling added that formulating this strategy “is especially important when the stakes of a particular case go beyond the limits of any one rule or case.” 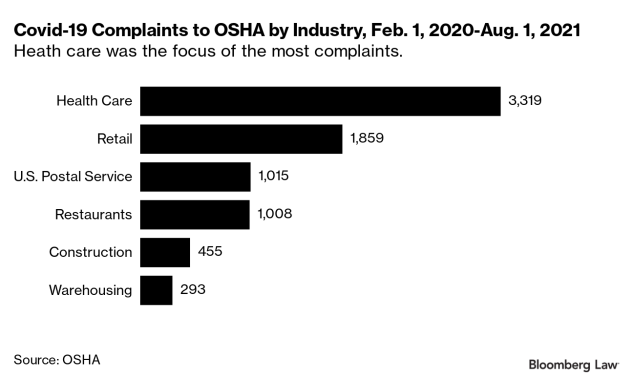 The torrent of Covid-19 complaints to OSHA that overwhelmed the agency a year ago has slowed to as few as 10 a week, agency enforcement reports show.

The Occupational Safety and Health Administration had received 15,337 virus-related complaints from February 2020 through Aug. 1. But just 460, or 3%, have been filed since May 1 when vaccinations were becoming readily available.

It’s not clear if workers’ concerns about the delta variant will reverse the decline.

OSHA received 61 complaints during the last week of July—more than the 44 complaints the agency received during all four weeks in June.

Also down are what OSHA calls “referrals,” a category that includes notices of possible violations turned in by other agencies and employers’ self-reported notifications of hospitalizations:
By Aug. 1, OSHA had taken in 2,289 referrals, with 5%—or 105—received since May 1.

The decline in complaints and referrals could lead to OSHA conducting more inspections based on any of the agency’s 10 national emphasis programs, including a Covid-19 program, or the dozens of regional and local emphasis programs. Those programs cover a wide range of work sites and hazards, from aircraft manufacturing in Colorado to bridge construction in New York.

“When unprogrammed activity, such as complaints, is down, we are able to be more proactive, and can open more programmed inspections,” OSHA said in written response to questions about the decrease in Covid-19 complaints.

A February report from the Department of Labor Office of the Inspector General highlighted OSHA’s dilemma during the first 10 months of the pandemic.

Covid-19 issues accounted for 42% percent of the 23,447 complaints to OSHA about all types of hazards from Feb. 1, 2020 to Oct. 26, 2020, the report said. But Covid-19 limited OSHA’s ability to conduct in-person inspections because the agency wanted to protect its own staff.