Ben Penn: The appointment of veteran Democratic U.S. Labor Department official Seth Harris as a White House labor adviser is the latest sign of President moving to elevate workers’ and unions’ interests compared with past administrations.

But filling the role of deputy assistant to the president on labor and economy with someone who served as deputy and acting labor secretary during the Obama era could pose challenges for White House-DOL relations and also raise questions about the Biden administration’s stance on the gig economy.

Harris’ position is housed within the influential National Economic Council. He technically reports to NEC director and top Biden economic adviser Brian Deese, but he’ll be responsible for coordinating labor issues across all other White House divisions that touch on labor, a White House official told Bloomberg Law.

Presidents from both parties have assigned a labor portfolio to aides inside several White House offices. Harris’ job description and seniority—he also counseled the labor secretary for almost all of the Clinton presidency—clearly indicate labor issues will be prioritized in this administration.

His depth of experience in federal labor law and connections throughout the administration and among key outside stakeholders on both sides of the aisle may prove a valuable asset to a president who has made important labor commitments. And Biden also hired Pronita Gupta as a labor assistant on the Domestic Policy Council.

While it’s not clear how much access Harris will have to Biden and Chief of Staff Ron Klain, situating a seasoned former DOL official in the White House creates the potential for the type of White House-versus-agency-leader power struggles that are common in any administration.

It’s worth noting that Harris drew some union support for labor secretary but ultimately was passed over in favor of Boston Mayor Marty Walsh.

An optimist would say Harris could coach up Walsh, who’s never worked in federal government, on how to navigate the complexities of advancing DOL policy, while ensuring Walsh’s priorities are on Biden’s radar. But one former senior DOL official was more skeptical, claiming Harris would be Walsh’s “babysitter.”

The White House official, who spoke on condition of anonymity during an interview arranged by the administration, cautioned against reading too much into Harris’ role and its implications for Walsh.

“The only sort of signal that people should take away from Seth’s appointment is that this president cares a tremendous amount about labor and about unions and about worker power,” the official said. “Marty Walsh is going to be a fantastic secretary and we’re going to work with him closely.” 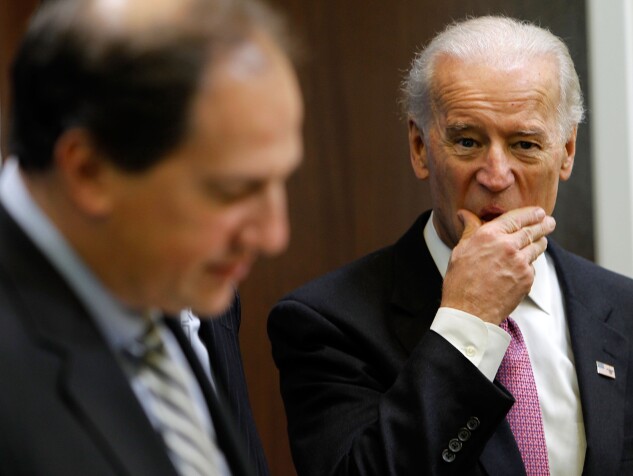 There are plenty of reasons to believe Harris and Walsh could forge a productive relationship, but tension may arise if outside groups—say, business or union lobbyists—are dissatisfied with a DOL decision or the department’s pace of action and decide to take it up with Harris.

Harris started his career in organized labor with the Seafarers International Union and has the support of AFL-CIO President and other prominent union leaders.

Yet some in the labor movement aren’t thrilled by his hiring, preferring instead a more ardent progressive champion. Harris earned a reputation in the Obama years as being receptive to management perspectives, even though he often disagreed with business views in debates.

The grumbling from some on the left stems from his stint at the corporate law firm Dentons and a 2015 paper he co-authored that proposed a new intermediate category for gig workers that would fall short of offering the full package of protections employees are afforded.

Harris now is serving a president who’s supported policies that would require platform companies such as to classify their workers as employees.

And Biden made another pivotal gesture to organized labor recently by speaking up for Amazon workers during a union representation election in Alabama.

Robert Iafolla: The National Labor Relations Board continued its transition from the Trump years by filling two key posts in its Washington headquarters.

Jeffrey Cruz, a former adviser to Sen. (I-Vt.) at the Budget Committee, was hired as director of the Office of Congressional and Public Affairs. He also has worked for Sen. Elizabeth Warren (D-Mass.) and the Obama White House.

“I am confident that under Jeff’s leadership the Office will make great strides in increasing public awareness of the important mission of the NLRB, and ensuring that the agency’s work is transparent and accessible for all,” Chairwoman said in a statement.

Kayla Blado will join the NLRB as press secretary later this month. She currently handles press for the Economic Policy Institute, a left-leaning think tank, and serves as president of the Nonprofit Professional Employees Union.

Although Republican members will hold the board majority until late August, the latest appointments show that McFerran, the board’s only Democrat, and acting General Counsel are gaining bureaucratic control over the agency.

The personnel gaps go all the way to the top: More than half of the agency’s 26 regional offices have at least one vacancy or temporary appointment in leadership. The NLRB’s regions were similarly plagued with senior-level vacancies one year ago.

“It’s very unfortunate that the agency continues to be hobbled by vacancies in the field,” said Marshall Babson, a former Democratic NLRB member who represents employers for Seyfarth Shaw. “It’s not in the long-term best interest of workers, unions, or employers to have huge gaps in high-level personnel and leadership.”

The traditional leadership structure at the NLRB’s field offices features a regional director (RD), who wields power delegated from both the board and the general counsel; an assistant to the regional director (ARD), who acts as a chief of staff and oversees representation cases; and a regional attorney (RA), who manages litigation. 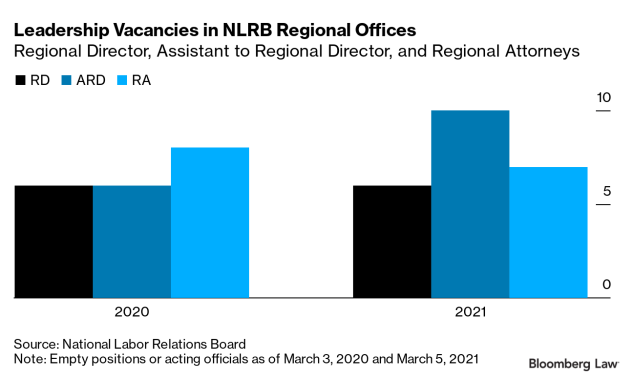 The NLRB has either acting officials or empty slots for:

Ohr will likely return to his regional director post in Chicago if Jennifer Abruzzo wins Senate confirmation to take over as general counsel.

Robb, who was fired on Inauguration Day, was unable to fill many of the top-level field vacancies after March 2020. At the regional director level, Robb brought in Thomas Goonan to lead the Philadelphia office—making him the only RD without previous NLRB experience—while elevating the ARD in Cincinnati to the top spot there.

The agency posted the Atlanta regional director job opening last week, and “hires for field office positions, including manager and supervisor positions, are in active consideration,” Ohr said in a statement.

McFerran, who’s working with Ohr to facilitate hiring, is “committed to ensuring that the regional offices have the staff and resources they need to fulfill the agency’s mission,” an NLRB spokesman said.