West Coast longshore workers have never been a timid bunch.

In 1934, they embarked on an 83-day strike that plunged San Francisco into a state of anarchy and crippled the regional economy. The workers prevailed, and the International Longshore and Warehouse Union has been a powerful force on the docks ever since.

This time, though, the union representing more than 20,000 workers who unload cargo at West Coast ports say they are squeezed in the middle of the U.S. supply chain meltdown, unable to meet demands by President to work 24 hours a day to unload massive container ships backed up in the waters off Los Angeles and Long Beach. Those ports are the nation’s busiest, receiving more than 17 million containers combined in 2019, more than double the volume of the Port of New York and New Jersey.

As the system is pushed to its breaking point, driving inflation and threatening to upend the holiday business season, unionized longshoremen say they can’t unload ships any faster because a shortage of truck and railroad workers is leaving tons of cargo stranded on docks, throwing off their fragile ecosystem. It’s happening as the union is dealing with the increasing threat to their jobs from automation, with its current collective bargaining agreement set to expire in July.

The problem has been metastasizing for months. In July, the Pacific Maritime Association, a consortium of 70 companies that operate at more than two dozen West Coast ports, published a report on what it labeled a “cumulative collapse of the entire logistics supply chain.”

The backlogs are caused not by a lack of longshore workers but a pileup of containers. “Despite ILWU labor hours reaching historic levels, production per hour dwindled due to terminal congestion,” the group said. 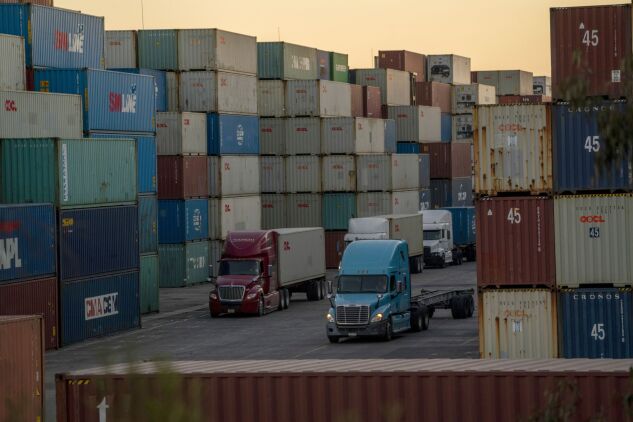 “We’ve always been ready to work 24/7,” Martinez said. “That’s always been part of the industry in my 40 years…we don’t just show up. Like I say, they have to order us.”

The problem starts as soon as ships reach port. The vessels are unloaded by the union longshore workers, who depend on trucks and trains to move cargo to warehouses inland. If the trucks and trains don’t show up, goods start piling up on the docks, preventing longshore workers from unloading more ships. Arriving vessels then start to line up outside the port, and the system grinds to a halt.

As of last month, containers offloaded from cargo ships sat at the ports of Los Angeles and Long Beach for an average of 5.94 days before they were picked up by a truck, according to the Pacific Merchant Shipping Association. That’s 38 percent longer than containers sat at the port a year prior.

“They’re sitting at anchor for an extended time, whether it’s LA, Long Beach, or Oakland—really all the ports now,” said Donald Marcus, president of the International Association of Masters, Mates and Pilots, which represents 5,500 licensed deck officers aboard U.S.-flag ships. “A big part of the backlog, as we see it, is really getting the containers off the dock.” 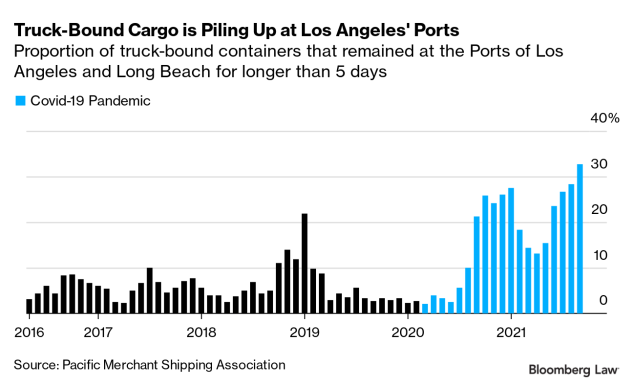 Longshore workers and shipping companies rely on short-haul truckers to pick up cargo from the docks and take it to local warehouses, but many of these drivers are considered independent contractors and have no obligation to work consistent shifts.

“It’s a lack of good jobs, and the corporations whose cargo is sitting in these very ports not stepping up to the plate to make sure that these workers are being compensated,” said Kristal Romero, a coordinator for the Teamsters port division. “These drivers are out there working 11 hours a day, as much as their service allows.”

The Ports of Los Angeles and Long Beach, in an effort to address the congestion, announced Monday that they will charge ocean carriers a new surcharge for cargo that’s backed up at marine terminals.

Beginning Nov. 1, truck-bound cargo that’s been at a terminal for nine days or more and rail-bound cargo that’s been at a terminal for three days or more will be subject to a $100 surcharge per container. That fee will increase in $100 increments per container per day. Approximately 40 percent of cargo currently at the ports would be subject to the surcharge, Port of Los Angeles Executive Director Gene Seroka said in a press release.

ILWU has suffered steep losses as union density has declined nationwide. It reported 29,000 members in 2021 compared to 37,000 in 2001, according to federal disclosures.

Automation crept into the shipping industry over that same period. Starting in 2002, the ILWU collective bargaining agreement gave terminal companies the right to computerize recording tasks previously done by marine clerks. The 2008 agreement went even further, giving management the right to introduce automated cranes and unmanned ground transportation, according to the Journal of Commerce.

There’s been no shortage of bad blood between ILWU and port companies in recent years. In 2019, a jury ordered the union to pay $94 million to a terminal operator in Portland, Ore., for engaging in illegal work slowdowns, threatening to bankrupt the ILWU. The federal District of Oregon later reduced the damages to $19 million, and the U.S. Court of Appeals for the Ninth Circuit is scheduled to hear an appeal in December.

The current collective bargaining agreement was set to expire in 2019 but ILWU and the Pacific Maritime Association agreed to an extension to avoid cargo disruptions. Now, due to circumstances out of their control, both sides are grappling with the very problem they sought to avoid.

In a statement, PMA spokesman Randy James praised the longshore workers but said that upgrading port technology is an “essential tool in moving cargo productively.” Total Terminals International, a major port company, told ILWU in May it would automate a fourth terminal at the Southern California ports, prompting backlash from union leaders.

“ILWU longshore workers and West Coast ports have cooperated in meeting significant challenges and moving record amounts of cargo during the pandemic,” James said. “With supply chain congestion expected to continue well into next year, we are hopeful this cooperation can extend to the contract negotiations to take place between the PMA and ILWU.”

“We’ve proven that we outproduce those machines, that human labor outproduces the automated terminal,” said Martinez of Local 94. “It’s all about cost.”

—With assistance from Andrew Wallender and Tiffany Stecker