Jaclyn Diaz spent two weeks this summer reporting on the ground in Poland as part of an international reporting fellowship, which allowed her to examine how the global pressure to transition from fossil fuels would impact the country’s workforce and culture. This is the second of two stories.

Zbigniew Jóźwiakowski’s private museum in the basement of his home in Wałbrzych, Poland, spans several rooms, leaving no wall uncovered.

Shelves are heavy with tools, some more than 200 years old, used by workers underground—lamps, radios, axes. Old respirators called upon in the most dire of circumstances, when a miner needed to be rescued underground, line walls—a reminder that not all goes well when you work hundreds of feet under the Earth’s surface for a living.

Jóźwiakowski, 65, a miner himself more than 20 years ago, said his collection started as a way to say thank you.

“I was underground 800 meters my whole career and nothing ever happened to me. Now I am saying thank you to Saint Barbara,” he said through a translator. 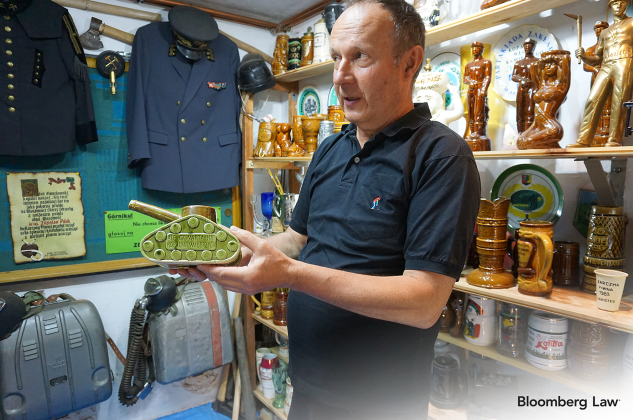 Even though Jóźwiakowski has spent years painstakingly collecting miners’ heirlooms, he says he knows the golden age for the industry is over. The younger generation is not interested in these traditions, he said.

Local residents and the younger generation are leading the charge toward a future without coal, said Marek Józefiak, a climate and energy campaigner at Greenpeace Poland. Central government leaders are reluctant to take big steps toward a Poland supported by renewable energy, but the tide is turning slowly among the people.

Environmental advocates say they’re witnessing a change in Poles who are growing tired of what they view as the negative side of mining: unhealthy air quality, record levels of air pollution, and constantly shifting ground that has left some buildings in former coal communities uninhabitable.

The European Union is in the middle of negotiating a net-zero carbon emissions target by 2050 which could have a major impact on the Polish economy and way of life. Poland has refused to sign on to the 2050 deadline which aims for a rapid decline in power sector emissions in the EU. The cost to Poland of modernizing its energy infrastructure is a major obstacle.

Polish Prime Minister Mateusz Morawiecki said in June that Poland “is one of those countries that must first have a very detailed compensation package. We must know how much we can get for modernization.”

Józefiak and other climate activists remain optimistic the political environment and the pressure on the country’s politicians will result in fast change from a reliance on coal to a focus on renewables.

By 2035 “we will be living in a different world. If we have more favorable laws, the transition will speed up. But a lot can be done with bad politics and bad policy. So the elections are crucial,” he said in English, referring to the October Parliamentary elections and the presidential election next year. 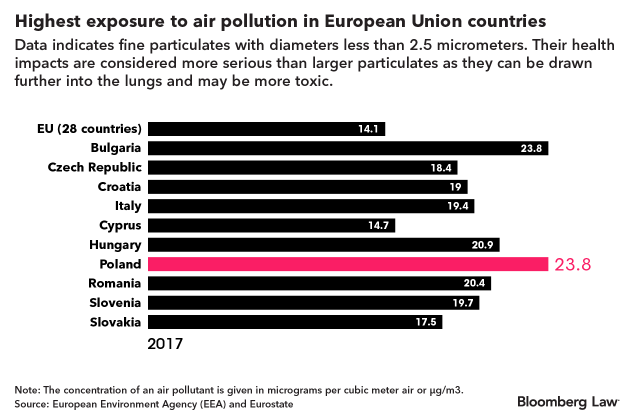 Poland has some of the worst air quality in the European Union due in part to mining and the use of coal as a source of heating in the winter. This is compounded by the burning of wood and other trash items to heat homes, which releases other toxins into the air. Fine particulate matter, nitrogen oxides, and ground-level ozone are generally recognized as the three pollutants that most significantly affect human health. Long-term and peak exposures to these three can impair the respiratory system and lead to premature death.

The European Environment Agency states that around 90% of Europeans living in cities are exposed to air quality levels deemed harmful.

Stanisław Zubalski, 67, and Sławomir Kaczmarek, 67, former miners and friends of Jóźwiakowski, joked that their bodies “are filled with coal,” making light of the fact that years after they’ve retired from the mining business they still suffer the consequences of their work.

Sources who spoke with Bloomberg Law did so through a translator on site unless otherwise stated. 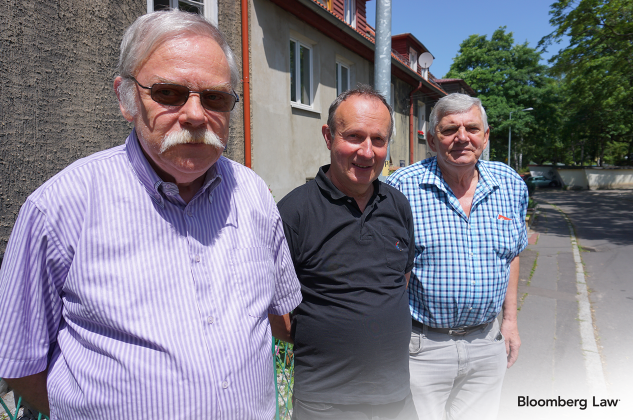 Miners, like Zubalski, Kaczmarek, and Jóźwiakowski, are often the first to feel the effect of coal on their bodies.

Silicosis especially is a major problem for some workers and has been known to kill miners much younger than themselves, they said.

This incurable lung disease is caused by breathing in tiny particles of silica, a mineral that is part of sand, rock, and mineral ores. Over time it causes scarring in the lungs, affecting a person’s ability to breathe. Coal workers’ pneumoconiosis (CWP), commonly known as black lung, is the other major health risk for miners.

It was estimated that between 25,000 and 46,000 coal worker’s deaths were caused by pneumoconiosis (CWP and black lung, respectively) and silicosis globally in 2013, according to one analysis. Silicosis, asbestosis, and pneumoconiosis accounted for 29,000 deaths worldwide in 2009 due to exposure to silica, asbestos, and coal dust in developing countries.

Air quality isn’t the only environmental concern around coal mining in Poland.

Every type of mining damages the environment in some way, said Piotr Kołodziejczyk, a geophysicist at the Silesian University of Technology. “It doesn’t matter if its coal, salt, or some kind of ore. This is inevitable.”

This damage includes ground surface collapse and breaks and cracks in the ground, something very familiar to residents of coal-mining communities.

Bytom, a city in Upper Silesia, was characterized by its heavy industry, including mining for decades. But it’s finally caught up with the community as a constantly shifting and cracking ground, including the occasional small earthquake that has damaged apartments and homes, leaving them uninhabitable. The issue has scared other residents enough to start protesting plans for new deep mines, according to Ilona Jędrasik, the energy Poland project leader for ClientEarth.

The same thing is happening in Wałbrzych. The city’s mayor, Roman Szełemej, told Bloomberg Law in English that hundreds of buildings have been destroyed due to the constantly shifting ground, which by his observations move around 3 centimeters a year. Since 1990, the city has demolished between five and 10 buildings annually due to the damage done by mining, according to city officials.

To help pay for this damage, and ideally to help pay for the construction of new housing, the city plans to sue Spółka Restrukturyzacji Kopalń SA, a state-owned company involved in the liquidation of mines. The lawsuit hasn’t yet been filed by the city, but Wałbrzych officials say they’re in the process of doing so. 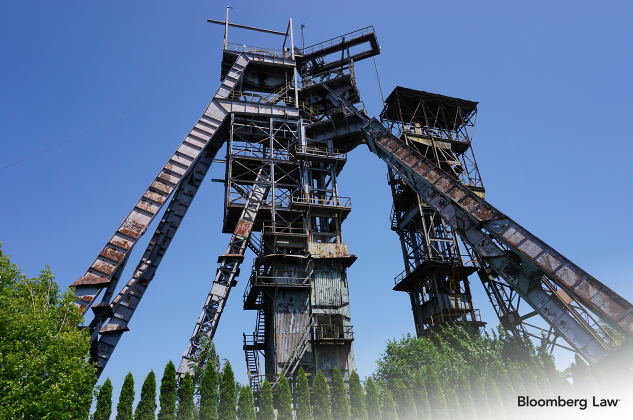 Italy, Spain, Germany, and the U.K., each have cut the proportion of coal in their power mixes this year because of the plunge in natural gas prices and the increased costs of releasing carbon emissions, according to BloombergNEF.

But in Poland, a major obstacle to encouraging the growth of renewables at a wide scale has been overcoming public policy and public interest, climate activists said.

It’s estimated that around 80% of Polish coal mines are unprofitable, according to a European Commission report. The governing Law and Justice Party has maintained support for the coal industry, and has continued to provide government subsidies to boost the industry, but rising carbon emission costs and volatility in the country’s energy market has made that commitment difficult for residents to understand.

ClientEarth claimed the project posed a financial risk to shareholders due to rising carbon prices and cheaper renewable energy options.

The country’s four major state-owned energy companies, PGE, Enea, Tauron, and Energa, are beginning to see the benefit of renewable energy options, like wind turbines and solar panels, which could help speed the shift away from coal.

Tauron announced plans in May to replace most of its coal-burning power plants with renewable sources, including wind farms and solar panels, by 2030. The shift in global trends and the tightening of EU climate policy forced the company’s hands. At that time, the company was in debt amounting to 11.8 billion zlotys ($3 billion). 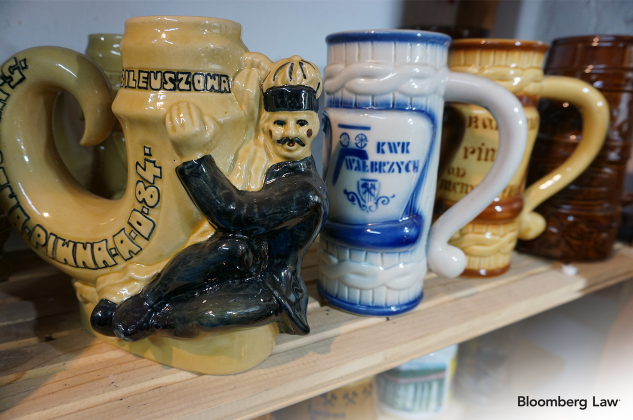 Wind energy was dealt a huge blow when the country passed its Wind Farm Distance Act in May 2016 to restrict construction, excluding most of the country’s land for wind turbines. But the government had to reconsider its strict positions to meet targets in EU renewable regulations. A significant pipeline of projects is now on the way to completion.

On top of that, current EU rules require Poland to ensure 15 percent of its energy comes from renewable sources by 2020. The country currently hovers around the 11% marker, Jadwiga Emilewicz, the Minister of Entrepreneurship and Technology.

The Polish Wind Energy Association has been working for close to 20 years to get the country’s government to take wind-based energy seriously, Irena Gajewska and Aneta Wieczerzak-Krusińska, with the organization said, speaking in English.

The distance rule nearly put the wind turbine industry out of business, but PWEA said they are now feeling more confident in the country’s renewable future. In their opinion, it’s the cheaper renewable options that will drive the evolution. In 15 years, Gajewska said, the country will have no choice but to get rid of its aging coal-based power systems.

“We are telling the government to be more ambitious in going green,” she said. “We expect and believe in the evolution and the transformation in the power system, but it all takes time.”

Marcin Krasnowolski assisted with this story.

Jaclyn Diaz
Reporter
Poland Grapples With Coal Transition as It Holds on to Tradition
© 2022 The Bureau of National Affairs, Inc.
All Rights Reserved