Jaclyn Diaz spent two weeks this summer reporting on the ground in Poland as part of an international reporting fellowship, allowing her to examine how the global pressure to transition from fossil fuels would impact the country’s workforce and culture.

The three miners dressed in their traditional black miners uniforms plopped themselves down—happy to finally get out of the hot sun. Poland was in the middle of a record-breaking heat wave and it was only June.

Over mugs of cold beer, the men described their decades of working underground in Poland’s coal mines. It was incredibly hard work, they said, and to some degree you might have to have a screw loose to do it. But the work created a tight-knit family under- and above-ground, they said.

The men: Józef Waliszewski, 69, Stanisław Urbaniak, 67, and Andrzej Summerfeld, 78, retired from the mining business decades ago. They’re now volunteers at the Witold mine museum and cultural center in Boguszów-Gorce, a former coal mining town in Poland’s southwest region of Lower Silesia.

Their work was a point of pride and they’re eager to share their history. After all, they helped to power their country for decades. But they and other former coal miners who spoke to Bloomberg Law said they know the sun is setting on Poland’s coal industry.

“We have to start thinking about what we are doing to Mother Earth. If we don’t start changing our ways, it’s not just Poland that ceases to exist, it’s the whole world,” Waliszewski said.

Fossil fuel-reliant communities around the world are grappling with how to transition to greener energy as more governments push for action to address the ongoing global climate crisis.

Even as environmental advocates and some government officials push for a full abandonment of coal in Poland, the U.S., and elsewhere, the carbon-rich black rock still powers communities around the world and remains a source of employment, and pride. While coal currently makes up nearly 80 percent of Poland’s source of energy, the industry employs around 80,000, down from the nearly 400,000 in the early 1990s.

Still, there is reluctance to publicly denounce coal to avoid angering the country’s politically aligned coal mining unions. Politicians fear if they do anything, coal miners will show up and protest in front of parliament, Marek Józefiak, a climate and energy campaigner at Greenpeace Poland, said.

Politicians want to have the miners on their side, especially as the country prepares for two major elections. In October, Poland will hold parliamentary elections, and in 2020, a presidential election.

To maintain its hold on the country, the party in power—Law and Justice (PiS)—needs as much support as it can get. The PiS party has aligned itself with coal companies and coal miners. The party won control in 2015, in part by running on a platform to maintain coal production. The party’s opponents, however, have called for a ban on coal burning in homes and the shuttering of all coal mines in the next 10 to 20 years.

China, India, the U.S., Australia, and Indonesia are the top five countries leading in hard coal production. Poland rounds out the top 10, according to Statista. 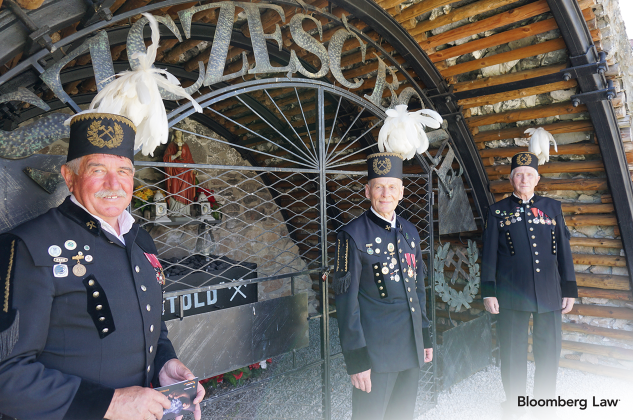 Stanisław Urbaniak, Józef Waliszewski, and Andrzej Summerfeld wear their traditional Polish mining uniforms as they stand by the St. Barbara chapel in front of the Witold mine museum and cultural center in Boguszów-Gorce, Poland.
Photographer: Jaclyn Diaz/Bloomberg Law

The European Union, of which Poland is a part, is in the middle of negotiating a net-zero carbon emissions target by 2050. This means the EU would see a rapid decline in power sector emissions, according to BloombergNEF. The next European Commission president, , recently pledged legislation on this target by February 2020. But Poland along with the Czech Republic, Estonia, and Hungary have formed a coalition blocking the proposals.

Current EU rules already require Poland to ensure 15% of its energy comes from renewable sources by 2020. The country currently hovers around the 11% marker and has a long way to go, Jadwiga Emilewicz, the Minister of Entrepreneurship and Technology, said in English. The target is binding under the EU Directive on the Promotion of Energy from Renewable Sources.

Daniel, a 28-year-old engineer at a mine near Murcki, a residential area part of Katowice, said he feels fairly secure in his job given his government’s stance on energy. Daniel’s real name is being withheld at his request to protect his identity from his employer.

“As long as these politicians are in power, we will extract coal for sure. As far as I know, Poland does not have very many possibilities to switch from coal to anything else,” he said. 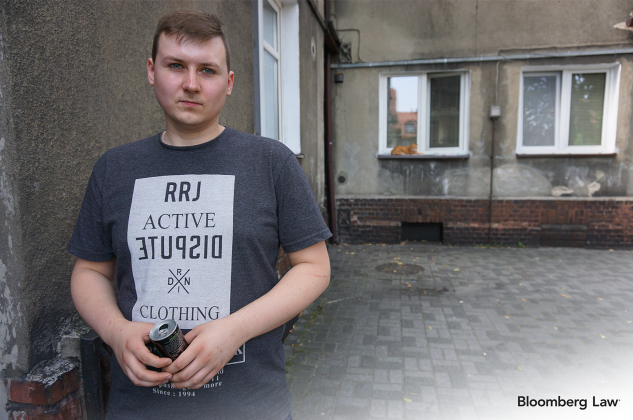 Daniel, a current engineer at a mine near Murcki.
Photographer: Jaclyn Diaz/Bloomberg Law

Sources who spoke with Bloomberg Law did so through a translator on site unless otherwise stated.

There are still plans to open new coal-fired power plants and mines, despite questions about the profitability of the industry and a growing faction of Polish society advocating for change.

The Ministry of Energy indicated in its draft national energy policy for 2040 that the government expects coal would drop from 80% to 60% of the energy mix by 2030. A representative for the Ministry of Energy didn’t respond to requests for an interview with Energy Minister Krzysztof Tchórzewski or a comment for this story. They did provide the draft energy proposal.

Pressure on Poland to transition to other sources of energy stems from the “stupidity of the European Union,” Arkadiusz Siekaniec, vice president of the ZZG union representing workers in the mining industry, said. The Polish government’s politics regarding the coal industry “is very good and wise,” he said.

The main Polish opposition group, the Civic Coalition, vowed recently that it would eliminate coal-generated power by 2040. A similar promise was made by Robert Biedroń, the founder of the Spring party, who proposed closing all of Poland’s mines by 2035.

If the mines are shut down, the impact on the communities like Murcki, where a large portion of people work at the mines, “would be very bad,” Daniel said. “I can’t even imagine.” But, he added, unions representing miners wouldn’t let this go lightly.

“I remember there was a time that the government tried to cut some benefits from us in the past. Then all the miners went to Warsaw and it was a really crazy demonstration. They removed the pavement,” he said.

Miners in the country are well-known for their protests over government proposals that could affect them or issues pertaining to the mining industry. Siekaniec said the union promises more protests in the future. 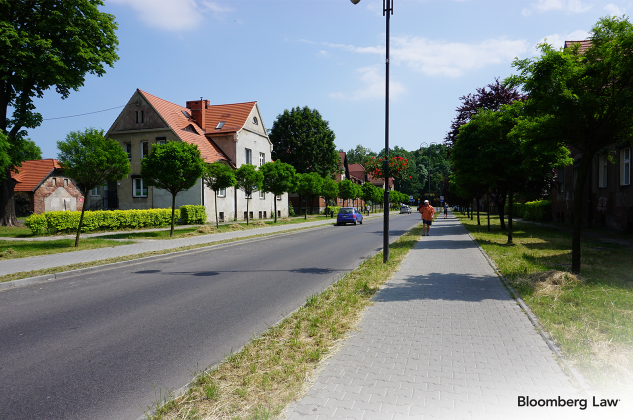 Trade unions at the state-run coal company JSW protested in June over Energy Minister Krzysztof Tchorzewski’s firing of the the company CEO Daniel Ozon. In 2015, JSW was the subject of another miner’s protest after the company proposed to scrap some social benefits and to dismiss union leaders. That strike lasted two weeks and idled all five of the company’s mines as the unions called for then-CEO Jaroslaw Zagorowski’s resignation. A deal was made and Zagorowski resigned.

Minister Emilewicz disagreed that Poland is a stalwart for coal.

“Sometimes Poland has been described as fighting for coal. We are not fighting for coal, we need to transform, and we are fully aware of that,” she said in English. “It’s worth mentioning, it wasn’t the Polish choice to establish the whole energy system on coal. The decision was made in Moscow.”

Poland was part of the Soviet-run Warsaw Pact military alliance and started transitioning to a democracy in 1989.

Sticking with coal isn’t sustainable, she said, but the government must also balance the need to transition to cleaner energy sources with support for residents employed in this industry whose financial well-being is based on coal and coal mining. There’s a need to speak to them “carefully,” she said.

Emilewicz is taking a democratic approach to appease both coal miners and environmental advocates, who have said they view her as someone they can negotiate with. She introduced legislation earlier this year aimed at increasing the use of renewable energy resources by Polish households and certain companies. This was formerly entered into force in August, a representative from her office said. She also has been working with banks to offer incentives for residents to purchase and install solar panels for their homes.

Emilewicz is a native of Krakow, one of the most polluted cities in Europe. A 2016 analysis by the World Health Organization found that 33 towns out of the 50 with the worst air pollution in Europe are in Poland.

The tradition of mining in the Silesian region of the country runs deep. Miners and their brothers, fathers, or grandfathers worked underground, as was the case for Waliszewski, Urbaniak, and Summerfeld.

Miners celebrate this history every Dec. 4, with the annual celebration of St. Barbara, the patron saint of miners and easy death. 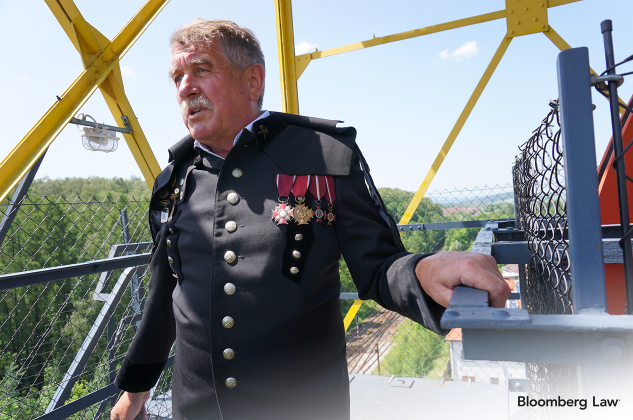 Miners gather every year dressed in their traditional best: a black uniform equipped with hats adorned with white, purple, or red feathers depicting a miner’s position, and medals. They’ll host a parade in town or a performance from a miners orchestra. The celebration isn’t complete without the customary festival. Each mining group designs ornate souvenir mugs for the celebrations. The parties last for hours.

“The mining union is one of the most prominent, one of the most socially significant. It’s kind of hallowed and it has this historical resonance. To be part of this union is something,” David Ost, a professor of political science at Hobart and William Smith College, said. Ost has written widely on eastern European politics and society as well as Poland’s labor unions.

Union strength stems from the 1970s and 1980s when Solidary, or Solidarność, a trade union and social movement, became the driving force of transition to democracy in Poland.

Siekaniec, with the ZZG union, said “the biggest myth is that a miner is a stupid guy using an ax underground.” These workers are highly qualified and trained to work in difficult conditions, he said. “A miner is also someone who can punch someone if they need to,” he said. 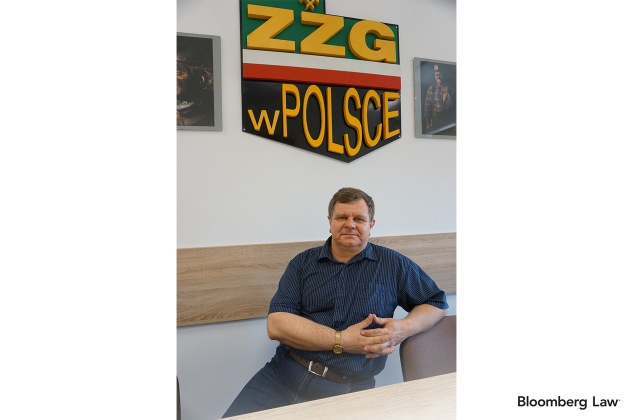 The coal mining industry was devastated when Poland went through a massive economic shift in 1989 that led to large-scale privatization.

What Does the Future Hold?

Katowice, a city about a three hours drive east from Boguszów-Gorce, has a reputation as Poland’s coal capital. The city of nearly 300,000 was established before and after World War II and built from the ashes of the area’s coal and steel industries, according to the city’s mayor Marcin Krupa.

“We had 10 coal mines and three steelworks, so it was a really industrial city and nowadays we have only two coal mines operating in the city and no steel works,” Krupa said.

Coal’s mark on the city’s customs is still evident. Katowice is famous for its soap and shampoo made out of coal.

The city was also chosen to host the United Nation’s 24th annual Conference of the Parties, or COP24, climate talks last year, a decision that confused and angered some environmental advocates. As climate change negotiators from around the world gathered in Katowice, President Andrzej Duda attended a miners’ festival and promised workers no one would “murder” Polish mining.

Krupa, however, seems ready to move on from Katowice’s industrial background. He pointed to the city’s push to build office space to attract young professionals and its efforts to promote conference event space. It’s necessary to meet the changing mindset of younger Poles, he said.

Marcin Krasnowolski assisted with this story.

To contact the editors responsible for this story: at csaenz@bloombergtax.com;
at thyland@bloomberglaw.com