A poster asking people to follow the social distancing measures to help stop the spread of the Covid-19 pandemic is seen outside a drugstore in Brooklyn, N.Y. on April 3, 2020.
Michael Nagle/Xinhua via Getty

Duct tape and shower curtains are two new tools of the trade for some retail pharmacists working through the coronavirus pandemic.

Major pharmacy chains like , , , and are starting to dole out masks and gloves to employees and moving to install plastic glass partitions as the pandemic spreads. In the meantime, some pharmacists and technicians are relying on their own makeshift barriers and protective gear to stay safe on the job.

“Every day I walk in knowing I might face someone who has it, whether they know it or not, and I just need to keep my distance and still do my job,” a CVS pharmacist in New York told Bloomberg Law. She said her store recently received a shipment of N95 masks, which employees must sign for when they start shifts and return after their shifts, wiping them down with disinfectant periodically.

Mask shortages have some pharmacy employees elsewhere reaching for anything that can be used as a cover and reusing store-issued masks for days at a time, they told Bloomberg Law. Others waiting on plexiglass “sneeze guards” to be installed at pharmacy counters are grabbing plastic shower liners from store shelves as a short-term fix.

“We put shower curtain liners taped up about three weeks ago,” a CVS pharmacy technician in Texas said. “I personally reuse masks and leave them in the sun afterwards, hoping the UV will kill whatever is on there.”

Doctors and hospital staff flooded with coronavirus patients are the first line in the fight against the health crisis, but pharmacy workers who often fill prescriptions for infected patients healthy enough to go home serve as a second wave. Their role could grow as major pharmacy chains are cleared to administer tests and eventually inoculations for Covid-19, the disease caused by the novel coronavirus.

The companies say they’re taking steps to protect workers, particularly in hard-hit states where pharmacies and the retail stores to which they’re often connected are allowed to remain open as “essential.” That includes offering paid time off for workers who test positive for the disease and those forced to quarantine, requiring regular cleanings, providing or encouraging workers to wear protective gloves and masks in some situations, and expanding curbside and drive-through pickups in others. 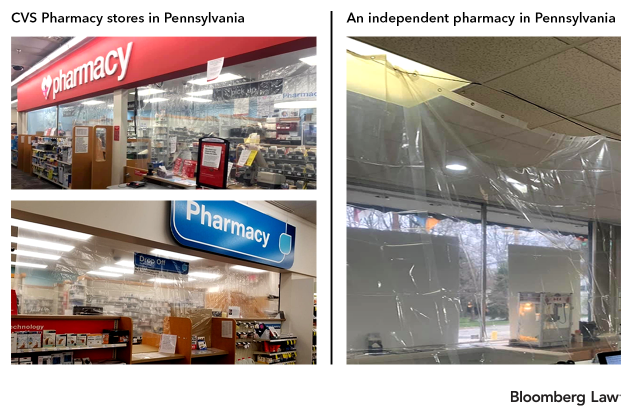 Pharmacies turned to plastic shower curtains to combat the spread of the coronavirus.

“Pharmacies are a critical resource for communities across the country, and we’ll continue to be here for customers and patients in these trying times,” CVS spokesman Mike DeAngelis told Bloomberg Law. “We’re constantly working to increase availability of supplies and update protocols to ensure our stores are safe for employees and customers alike.”

CVS is giving pharmacists and other workers bonuses ranging from $150 to $500, DeAngelis said. Rite Aid is offering $1,000 to pharmacists and managers, while boosting hourly employees’ pay by $2 during the pandemic, the company said. Walgreens employees told Bloomberg Law the company has pledged to give them spot bonuses of $150 to $300.

Retail pharmacy operators also are staffing up for an expected uptick in demand, which will mean more workers for the companies to try to keep safe. CVS said it’s working to “immediately” hire 50,000 full-time, part-time and temporary workers across the country. Walgreens said it’s adding more than 9,000 workers to the payroll and Rite Aid said it’s hiring 5,000 new employees.

Some pharmacy employees said their companies are doing the best they can, given the emergency situations. Others, who spoke with Bloomberg Law on condition of anonymity, described a patchwork system in which safety protections vary widely depending on whom you work for and which store you’re in.

“Pharmacist safety measures are being inconsistently enforced across stores,” said Ilisa Bernstein, a senior vice president for the American Pharmacists Association. “That has led to a wide rage of makeshift responses from pharmacists and techs on the front lines.”

Bernstein and others said the pandemic is highlighting long-running issues for pharmacy workers, including long hours with few or no breaks, aggressive quotas, and insufficient paid sick leave.

Frequent hand-washing and social distancing are still the top prescriptions for stopping the spread of the virus, but recommendations from the federal government continue to shift.

The Labor Department’s Occupational Safety and Health Administration in new guidance advises that retail, pharmacy, and other workers use some form of masks. OSHA also says retailers should set up plexiglass partitions between workstations. 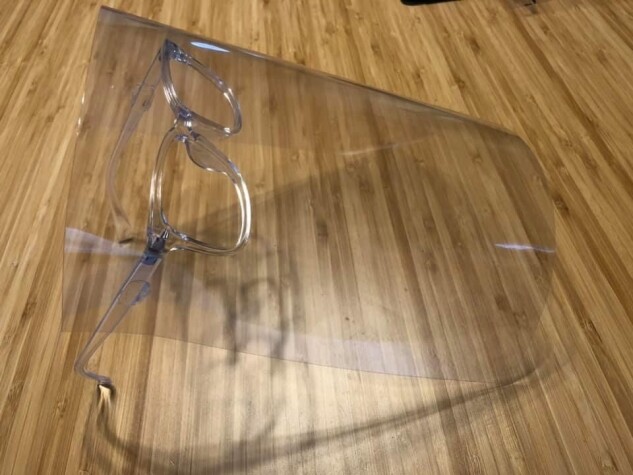 A pharmacy employee glued a plastic shield to a pair of glasses as a safety precaution during the pandemic.

The CDC and OSHA also urge pharmacies to take various steps to limit close contact between staff and customers, including using signs and barriers to keep customers at least six feet away. That can be tough to pull off in busy retail settings with lots of foot traffic.

“Social distancing is physically impossible in my store,” a Walgreens pharmacist in Ohio told Bloomberg Law. “There’s no way I can keep three feet, let alone six feet, away from customers and the rest of the staff and still do my job.”

CVS said it began outfitting stores with “protective panels” at registers and pharmacy counters in March and they’ll be installed in all stores by the end of the week. Rite Aid plans to have all of its stores equipped with plastic glass partitions by April 14. Walgreens is “working as quickly as possible to complete the installation across all of our stores,” said Boyd, the company spokeswoman.

Some pharmacy employees want retailers to shift to curbside, drive-through, and home delivery for medications. More than 100,000 people have signed a Change.org petition asking major chain pharmacies to go “drive thru only.”

A CVS employee behind that petition said staff at his store put credit card readers on the far end of long folding tables to keep customers from getting too close to the pharmacy counter.

Aaron Snay, who owns a small pharmacy in New Hampshire, began locking the front door and forcing customers to do curbside delivery in late March. When he and his wife Cindy, the store pharmacist, learned a neighbor had the virus, they set up an iPad for customers to communicate with pharmacy staff. 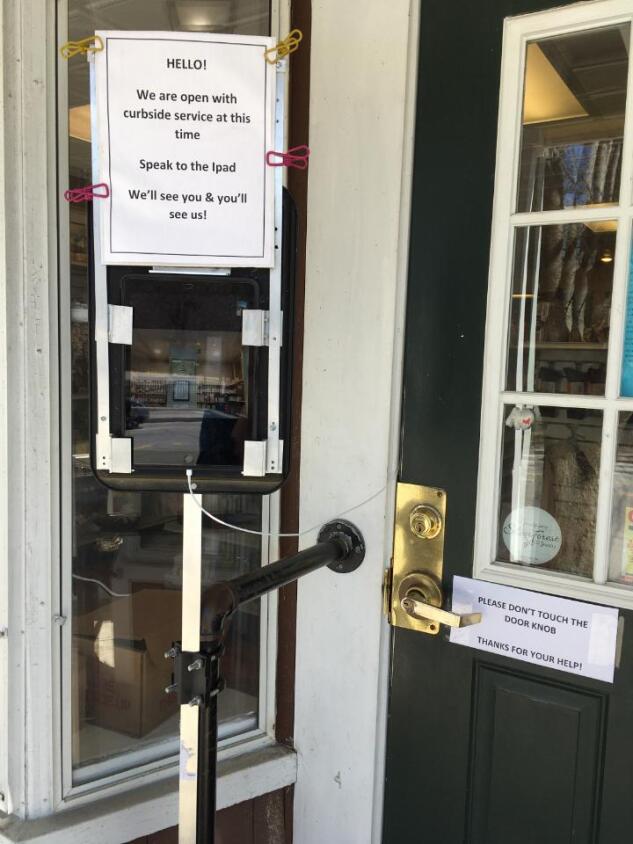 Employees at Warner Pharmacy in Warner, New Hampshire are using an iPad to perform curbside transactions during the coronavirus pandemic.
Aaron Snay/Warner Pharmacy

Snay said the move already is taking a bite out of the store’s nonprescription revenue, including from over-the-counter medication and other items.

“It’s hard to make money on prescriptions these days so you have to fill in other parts of your business,” he said. “For us, I’d rather lose that business than put my wife and our employees at risk.”