Any Port in a Storm

About one-third (35%) of this year’s workforce will probably do its thing without ever showing up in the office.

Along with stats about the size of freelance nation (57 million) and collective earnings from piecemeal assignments (approximately $1 trillion), Upwork dissects what individuals are doing to get by. 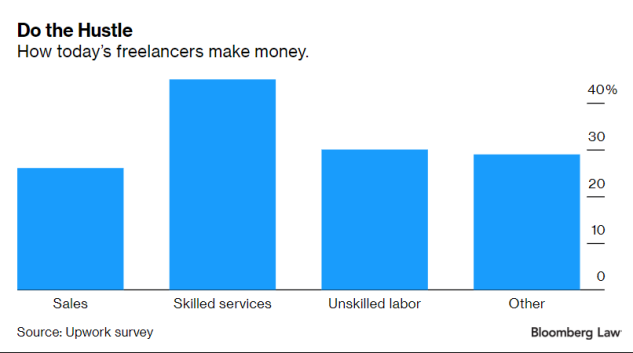 Nearly half of respondents (45%) said they provide skilled labor such as computer programming, writing, and marketing campaigns. Just under a third (30%) reported doing unskilled tasks such as delivering products, walking dogs, or driving for ride-hailing companies. A quarter (26%) of the respondents are committed to selling stuff, be it commercial goods (retail shops), household items (flea markets), or the roof over their heads (Airbnb).

While some freelancers are doing well—earning about $28 an hour, which is better than “70 percent of workers in the overall U.S. economy,” according to the survey—others struggle with their finances.

Upwork analysts report that freelancers are burdened with student loans or other debts (46%) and that nearly six in 10 said they live “paycheck to paycheck.”

Turns out ‘90s rappers The Lox got it all wrong.

When it comes to social media, roughly two in three (63%) said they try to keep their online presence to themselves. That is tough given that nearly half (46%) of the respondents said they’ve felt pressured to accept a friend request from a coworker.

Half of the respondents (50%) said they’ve “friended” a workplace manager on Facebook. The incidence of those connections dwindle on alternative platforms including Instagram (23%), LinkedIn (22%), Twitter (18%), and Snapchat (13%).

Words are a waste of time.

Sure, they’ve dominated human communication since the dawn of time. But that’s old news.

The future of workplace discourse, according to email survey provider Customer Thermometer, is cute, concise emojis.

“Far from being a formality-fail, emoji represent the biggest advancement in the human language since the written word,” Customer Thermometer CEO Lindsay Willott decrees in a recent report, adding the colorful, sticker-like icons “are enriching communications by adding imagery, tone and feeling.”

And how, pray tell, are workers using this breakthrough in nonverbal diplomacy?

About one-third (35%) of respondents said they pepper email replies with starry-eyed smiley faces/bright red hearts/hands flashing the thumbs up sign because it’s faster than tapping out full sentences while “on the move.” Over half (55%) of the respondents said they’ve tossed in some eye candy to help avoid misunderstandings. And nearly three in 10 (28%) said they find it reassuring when the boss provides feedback via emoji.