The U.S. Department of Defense seal is seen on the lectern in the media briefing room at the Pentagon.
Photographer: PAUL J. RICHARDS/AFP via Getty Images

How much of that will lead to permanent expansion of working at home at the largest U.S. government agency, and how much will end up in reserve in case of another outbreak or emergency, remains to be seen. Some of the department’s 23,000 Washington-area personnel may begin returning to offices as restrictions ease for bases across the country.

The department went from about 95,000 personnel working remotely on any given day before the pandemic to about 1.1 million now, Dana Deasy, the Pentagon chief information officer, said in an interview. That’s led to an astounding amount of new work being done outside the Pentagon building. 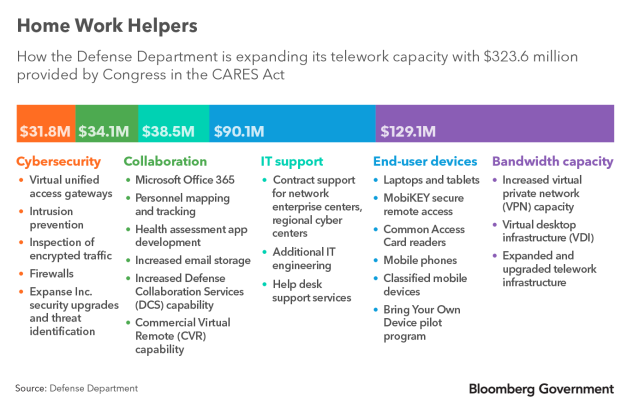 As of this month, Deasy said, there have been 44 million remote chat sessions, 16.8 million phone calls, 147,000 meetings, 339,000 group team meetings, and more than 134,000 collaboration teams formed since the Pentagon emptied out in March.

“We had this influx of going from 95,000 people who for the most part already had devices and suddenly we’re finding you needed to come up with new equipment,” Deasy said. “We were challenged with how we could quickly get equipment from the supply chain.” The department has 2.15 million service members and about 732,000 civilians.

The department set up a telework task force that doled out existing laptops, tablets, and other devices from its storerooms before the CARES Act () stimulus funds began flowing in May, and enabled another buying spree of additional equipment, software, and information technology services.

The largest portion of the stimulus money is going to increased bandwidth, according to the department’s reporting to Congress on the legislation. About $129 million is slated for increasing employees’ capabilities to share private communications across a public network; the use of virtual desktops on remote PCs or laptops; and other expanded and upgraded telework infrastructure.

Just over $90 million from the legislation will be spent on devices such as laptops and tablets as well as access card readers, cell phones, classified mobile devices, and a pilot program allowing employees to use their own devices.

The effort has been so fast-paced that the Pentagon can’t yet say how many laptops it has purchased, another indicator of the level of remote work. It declined to discuss specific contracts with companies related to the effort.

“We do not have a comprehensive rollup of those purchases right now as we are still making purchases and issuing equipment. We plan to have an accounting when the COVID emergency has subsided,” Lt. Col. Robert Carver, a Pentagon spokesman, wrote in an email. “Right now, we are focused on meeting the needs of the workforce.” 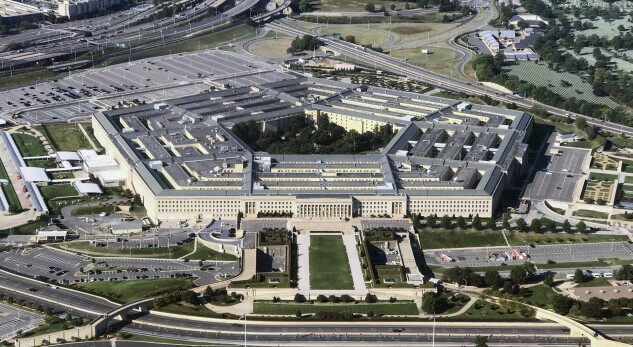 The volume of information flowing outside Pentagon walls has raised concerns about cybersecurity in a department that oversees national security and sensitive military information.

Personnel have received more than 2,000 new devices that allow the handling of classified information from home, including video conferencing. The National Security Agency and U.S. Cyber Command reviewed use of the devices before the rollout, Deasy said.

The department is spending $31.8 million of the CARES Act funds on cybersecurity to prevent intrusions and shore up virtual access points, firewalls, and protective software.

“Though we continue to hear about certain phishing campaigns or activities, we’re not seeing what I’ll call a heavy load of specific Covid-related activities,” Deasy said.

A looming question as the department spends hundreds of millions of emergency taxpayer dollars, and for tens of thousands of its local personnel, is how the vastly expanded capacity will be used as the pandemic eases and eventually disappears.

At least some of the expansion could sit ready for another emergency.

“We have to be able to know that in the future, if the department needed for whatever the reason was this scale teleworking that we now have the infrastructure to support that,” said Deasy, adding that some upgrades to communications systems were already planned and accelerated by the virus emergency.

`No One Size Fits All’

Levels of future telework and daily use of new laptops, card readers, and classified systems are just a part of the personnel decisions the Pentagon confronts.

On June 15, the Pentagon building shifted to phase 1 of the reopening plan from , the chief management officer. As much as 40% of the building’s personnel can return to office spaces now, while a future phase 2 plan would limit returnees to 80%—with a goal of 20% teleworking.

The department has left the levels of post-pandemic telework an open question for individual commanders and supervisors. While the Washington, D.C. region slowly reopens with infections declining, other areas of the country are seeing spikes in new cases.

Hershman’s plan mirrors the military’s practice throughout the pandemic of leaving to base commanders decisions over local health measures such as unit gatherings and barber shops. Department guidance June 8 allows bases in 38 states, the District of Columbia, and five countries to ease travel restrictions.

No levels or goals for telework are set in the last stages of the Pentagon building’s reopening plan.

“As operations return to normal, there are many things we need to consider when assessing future telework levels. There is no one size fits all solution for all Pentagon agencies,” Hershman said in a statement.

Meanwhile, personnel are pressing the department to be open about the decisions to bring remote workers back to the office, said Felicia Sharp, president of AFGE Local 1410 of the American Federation of Government Employees. The chapter includes members from the Defense Health Agency and the military medical facilities that fall within the National Capital Region Medical Directorate.

“For us this is a risk, because what you don’t want to have is all of sudden you’re in phase 1 and the controls for safely returning people to the work environment have not been thought out,” said Sharp, who leads the union’s defense conference.