Boston Mayor Marty Walsh has vowed to work with both parties as Labor Department secretary to address the hundreds of underfunded multiemployer pension plans in the U.S. that are now in danger of collapsing.

The big problem standing in his way? Congress has that power, not the U.S. Labor Department, according to labor attorneys and industry insiders. Which means that if Walsh is confirmed by the full Senate for the Cabinet spot, the two-term mayor will have to rely on his organized-labor background and a unique propensity to bridge divides and broker deals outside DOL’s scope to help rescue the tapped-out plans.

“The thing that is going to be pretty neat about going in to see Secretary Walsh is you’re not going to spend the first 20 minutes trying to explain what the heck a multiemployer pension plan is,” said Timothy Lynch, a senior director at Morgan Lewis in Washington who testified in 2018 before the now-defunct Joint Select Committee on the Solvency of Multiemployer Pension Plans.

“We can skip over all of those chapters and then go to what needs to be done. That alone really just puts him in a very, very unique position—certainly unique in the time I’ve been working on the multiemployer plan issue,” Lynch said.

Walsh has a reputation of working collaboratively on issues that don’t fall directly under his purview, and that he has a genuine interest in industry successes as long as they don’t come at the expense of workers.

“Marty doesn’t give things lip service,” said Julie Pinkham, executive director of the Massachusetts Nurses Association. “He takes action, even when things seem outside of his control.”

Multiemployer pension plans between groups of like businesses and their unions are facing a bleak future as fewer workers than ever are employed by participating industries and plan assets have suffered irrecoverable investment losses in recent economic downturns.

About 120 of the 1,400 U.S. plans are in critical or declining status and could collapse in the next 20 years, according to annual DOL filings. Meanwhile, the government-sponsored program designed to insure those faces insolvency. The Pension Benefit Guaranty Corporation, is on track to exhaust its resources by 2026, according to its most recent annual report.

House Democrats have included a cash payment program called the Emergency Pension Plan Relief Act in their Covid-19 relief package that would help the PBGC make benefits payments for failed plans and increase the premiums the agency is owed beginning in 2031. If passed, the DOL itself will have very little influence on how that program is enforced.

“There is a crisis facing both PBGC and a lot of plans, but that is out of DOL’s control,” said Michael Kreps, a principal at Groom Law Group in Washington. “They have no ability to affect the funding rules. That’s all Congress.”

Where Walsh could exert influence, Kreps said, is on the PBGC board of directors, comprised of the secretaries of Labor, Commerce, and Treasury. The Labor secretary serves as chair of the group, which oversees the work of Director Gordon Hartogensis, a Trump-era appointee.

Former department officials have said the PBGC board under President is likely to allow Hartogensis to serve out his five-year term to see through the pension funding crisis. If confirmed, Walsh would be in a position to advocate for further multiemployer reforms and translate for union-backed plans as they navigate PBGC funding Congress is expected to pass. 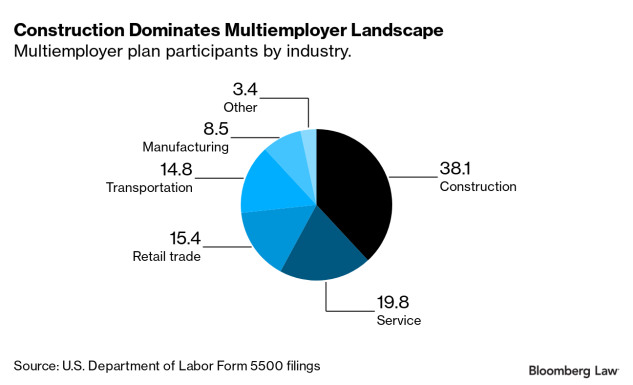 Kreps said Walsh’s organized labor credentials, as a former head of Boston building trades would serve him well on the PBGC board, especially if the Emergency Pension Plan Relief Act passes. If it does, 120-plus union-backed pension plans would be vying for federal support over the next two years, many of them carrying distinct constraints borne out of the collective bargaining process.

Walsh speaks the union language, Kreps said, because he understands that multiemployer pension plans are an equal partnership of union and employer interests.

His specific background with the Boston building trades suggests familiarity with a plurality of those plans, too. More than 34% of multiemployer plan participants work in the construction industry, according to analysis of DOL Form 5500 filings.

As Labor secretary, Walsh would also purportedly carry weight in the selection of the assistant secretary of Employee Benefits Security Administration, a DOL agency responsible for enforcing the Employee Retirement Income Security Act of 1974, which establishes the multiemployer plan framework.

EBSA played a role in helping reform zone statuses for multiemployer plans in 2014, and there have since been calls to resume those efforts. But ancillary adjustments to the way multiemployer plans are classified don’t address the heart of the problem, which is twofold, according to Seong Kim, a partner at Seyfarth Shaw in Los Angeles.

It’s true that the PBGC must be funded by Congress, Kim said, but the multiemployer plan structure itself is unsustainable in the present market, because individual employers are responsible for covering the difference whenever another employer goes under.

That structure discourages increased participation, Kim said. It’s essentially doomed to fail in regions of the country where plans don’t have diverse industry participation; if one industry is hurt by a financial setback—like the Covid-19 recession has impacted the service industry—then a multiemployer plan made up of that industry can’t rely on anything or anyone else to keep it afloat.

“The regulatory fixes EBSA could pursue are really only Band-Aids,” said Alan Cabral, another partner at Seyfarth Shaw in Los Angeles. “At this point, those sorts of fixes aren’t going to really move this problem along.”

Construction unions in particular have criticized the Pension Plan Relief Act for its failure to address plan structure. Beyond any role Walsh may play overcoming differences on the PBGC Board, the former mayor may also find his element in brokering future reform deals, even if they’re outside the typical range of a secretary of labor’s work.

An early test for Walsh among construction trades that are hoping to influence him will be his messaging if the PBGC bill is passed. Not only would he need to endorse the cash payment program—careful not to characterize it as a bailout for building unions—but he also would be called on to use his influence to push structural reforms that preserve pension obligations and afford plan managers flexibility.

“He has to be able to communicate effectively, so that this bill doesn’t sour the conversation when it comes to future reforms,” said Brian Turmail, vice president of public affairs and strategic initiatives for the Associated General Contractors of America. “We don’t want ‘multiemployer’ to become a four-letter word like stimulus did back in 2009.”