A rapid wave of MSPB cases could strain the Federal Circuit's resources to handle appeals over the next few months.
Photographer: OIC VENANCE/AFP/Getty Images

A potential flood of federal worker appeals to the Federal Circuit will be a “wake up call” for patent attorneys who’ve become accustomed to a mostly patent-focused docket at the court.

The U.S. Merit Systems Protection Board—which had no members for the entirety of the Trump administration—now has a two-member quorum for the first time in five years. The board, which awaits Senate confirmation of its third and final member, has now started issuing decisions to chip away at a backlog of nearly 3,600 cases concerning federal agency personnel, pay, and benefit decisions, as well as accusations of whistleblower retaliation.

The speed at which the board makes decisions will decide just how much the U.S. Court of Appeals for the Federal Circuit is affected, attorneys said.

“Every Federal Circuit practitioner should care about it even if they have no interest whatsoever in the MSPB,” said Christopher Suarez, an intellectual property litigator at Steptoe & Johnson LLP. “It’s going to be somewhat of a wake up call for the bar and frankly for the court because they’re going to be dealing with a lot more of these cases.”

He added that he believes it’ll be the “biggest influx of cases” to the Federal Circuit since it saw a ramp up of Patent Trial and Appeal Board decisions a few years ago.

Twelve judges sit on the Federal Circuit, with no current vacancies. The court’s caseload rose from 1,456 in 2020 to 1,582 in 2021, according to the court’s data. A majority of those filings come from challenges to U.S. Patent and Trademark Office and federal district court decisions. 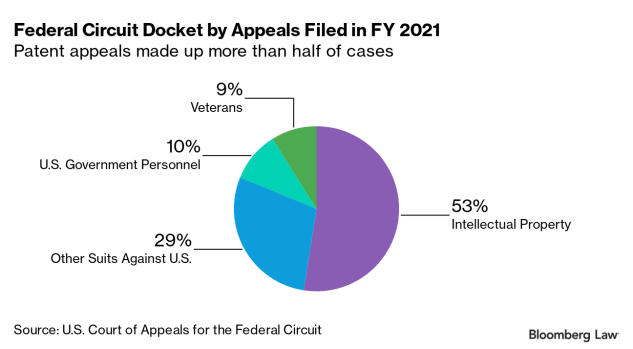 It’s too early to tell how much time it will take for the federal worker panel to get through the backlog, said MSPB acting director William Spencer.

Patent appeals won’t necessarily take longer unless the MSPB cases are decided in large chunks, Suarez said. There also shouldn’t be delays in oral arguments as most MSPB cases have parties who represent themselves and aren’t argued before a three-judge panel.

Still, more cases could wear down the court, attorneys said.

“If you only care about patent law, it’s going to have an impact on the judges’ time and resources and has an effect on the court,” Suarez said.

And, new cases are still coming in to both the MSPB and the Federal Circuit. Federal workers wanting to challenge administrative judges’ decisions, when the board sat unfilled, had to bring their cases straight to the appeals court.

Given the thousands of cases pending at the MSPB, it might still be faster for workers to bypass the board and appeal directly to the Federal Circuit, said James Eisenmann, a partner at Alden Law Group PLLC who was the board’s executive director from 2013 to 2018.

Eisenmann expects it will take around three years for the MSPB to get through the backlog. In the meantime, he said there might be fewer appeals to the Federal Circuit as people shift back to asking the MSPB for review.

The board’s approach to triaging the backlog will soon offer clues as to how long it might take to get through the pileup and just how much it will affect the Federal Circuit. So far, Eisenmann said, there isn’t a discernible pattern, though the board may be waiting for its third member.

Ibidun Roberts, a labor and employment attorney at Roberts Labor Law and Consulting LLC in Columbia, Md., offered a different take, saying the board should be able to get through the cases relatively quickly. The MSPB has “buckets” of cases waiting to be reviewed, and once the board resolves an issue in one category, it will likely quickly resolve the other similar petitions, she said.

“I might be optimistic,” Roberts said, “but I think a year would be record time for them.”

MSPB cases that have been in limbo the longest—some of which have been pending for more than five years—will be at the top of the board’s priority list, Eisenmann said.

These include back pay, whistleblower retaliation, and retirement and survivor annuity benefit cases, he said. Estimates from 2019 said back pay awarded by the new MSPB could amount to millions of dollars.

The board will also need to address appeals of disciplinary actions against Department of Veterans Affairs employees in the wake of a law signed by then-President in 2017, Roberts said.

The Federal Circuit has issued some guidance on that statute, but much of the law is still being figured out, she said.

“We’re in its infancy of shaking out all those parameters and the MSPB has not had a quorum to rule on it yet,” Roberts said. “There are a number of issues there that the VA and their employees need guidance on.”

Suarez, who has represented clients pro bono in MSPB cases before the Federal Circuit, said there are fewer institutionalized programs at law firms that provide opportunities for diverse and junior attorneys to argue MSPB cases than there are for veterans cases.

“I do hope that more pro bono cases can be a vehicle to get more diverse attorneys meaningful opportunities at the Federal Circuit,” Suarez said, though he added that pro bono, non-patent cases shouldn’t be the only way to improve the diversity of attorneys arguing at the court.

Samantha Handler
Reporter
Feds in Job Limbo Look to Biden to Unlock Cases Frozen for Years
Bypassing Memberless Federal Personnel Board Is Doable for Some
‘Buckets of Back Pay’ Could Go to Feds Once Appeal Board Is Back
© 2022 The Bureau of National Affairs, Inc.
All Rights Reserved