Working parents once again face the dilemma of school and day care closures as the delta variant surges, but this year their paid leave options are scant.

The federal safety net for coronavirus-related paid leave that Congress passed in 2020 expired in December. And while several states have passed pandemic-related leave measures, not all guarantee coverage for school closures.

“Working parents in most states and cities are facing an uncertain fall,” said Vicki Shabo, senior fellow for paid leave policy and strategy at New America’s Better Life Lab. “Parents are essentially playing the boss lottery if a child is sick and needs to stay home.”

Since the onset of the pandemic, parents or caregivers have filed roughly 100 lawsuits under the now-expired Families First Coronavirus Response Act, alleging they were fired or unlawfully denied leave when schools or day cares shut down. This represents about a quarter of the more than 400 cases brought since last April under that law, which also provided protections for workers with Covid-19 symptoms or who needed to care for someone quarantining.

The virus already is forcing schools and districts in several states—largely in the South where vaccination rates are low and mask mandates are rare—to return to online learning after reopening in person. Closures have been reported in Arizona, Florida, Georgia, Illinois, Texas, and Virginia, with many more schools starting back up in coming weeks.

Workers’ rights groups hope the pandemic will spotlight the need for a long-term solution. The U.S. Bureau of Labor Statistics says 79% of Americans don’t have a defined paid family leave benefit and only 40% of workers have an employer-provided medical leave policy.

Without broad protection for child care, many workers will have few options, said Rory Quintana, a discrimination attorney with Quintana Hanafi LLP in San Francisco, who represents workers.

That will again negatively impact women, who already bear the brunt of caregiving responsibilities and are leaving their jobs, adding to historic declines in workforce participation from last year.

“What happens when a company requires workers to come back to the office?” Quintana said. “If parents choose to keep their kids at home, how will their job be protected if they require them to return to work? I’m curious to see whether the pandemic will have a long-term impact on the changes in the law.”

Paid family and medical leave, however, has been included in a Senate budget reconciliation proposal, which would allow workers to still earn a paycheck if they fall ill or need to care for a family member. Currently, that type of leave is unpaid under the federal Family and Medical Leave Act.

It’s unclear whether the paid leave provisions will pass through that process, which would only require a simple Senate majority from Democrats.

Some employer representatives, however, say reconciliation isn’t an appropriate avenue for such a policy.

Marc Freedman, U.S. Chamber of Commerce vice president of employment policy, said while the Chamber doesn’t support current proposals, it could support a form of paid leave that would avoid the patchwork of leave laws around the country.

“We believe that there could be support from the employer community,” Freedman said. “The business community has evolved on this question.”

Jeff Nowak, an attorney with Littler Mendelson P.C. in Chicago, also expressed skepticism over the enactment of federal legislation.

“Overall, the way out of this pandemic is highly unlikely to come from Congress expending any form of paid or unpaid leave,” said Nowak, who represents employers.

Businesses should instead offer “common sense” policies and flexible working arrangements for parents, he said.

Even while the federal Covid-19 paid leave law was in effect, some worker advocates criticized its limitations.

A Better Balance, an advocacy and legal nonprofit, reported that many workers weren’t protected because it didn’t apply to large companies with more than 500 workers, or small employers with less than 50, and it exempted many health-care employees.

Paid leave for school closures under the law also was capped over a 12-week period.

“The issues for parents have evolved but haven’t gone away. In the last year, many didn’t have the protections and parents are struggling to fill the gaps they need,” said Molly Weston Williamson, director of paid leave and future of work at A Better Balance. “Working parents will make tough and impossible choices to do what they need to do to keep their family safe.” 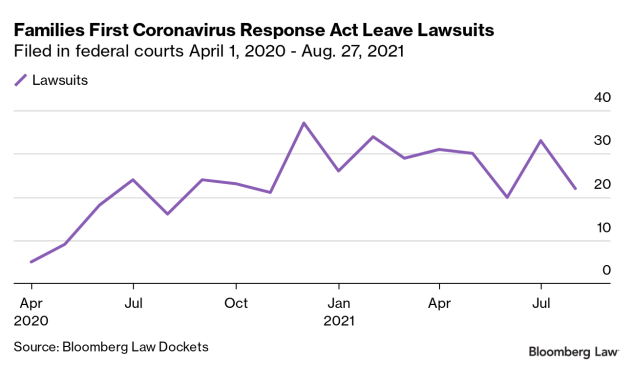 Thirteen states, Washington, D.C, and dozens of localities have permanent paid family and medical leave laws. Some include provisions that allow workers to take sick time when a workplace or school is closed.

A handful of others—including New York and Colorado—also have passed emergency leave laws in response to Covid-19. Not all cover closures and many may expire soon.

This scattered approach can be difficult for employers to navigate, said Joshua Seidman, a labor and employment attorney with Seyfarth Shaw LLP in New York.

“There are so many variations in terms of benefits,” he said. “It’s a problem for employers given how quickly the landscape is moving and for workers to know what rights exist under the law.”

The scarcity of paid leave for working parents will hurt the economy, civil rights proponents say.

Women make up the largest share of the unemployment figures in the last year, according to the National Women’s Law Center.

As of July, 28,000 women and 112,000 men ages 20 and over returned to the labor force, are actively looking for jobs or are now working. Women accounted for just 20% of those who re-entered the workforce in July and the participation rate remained unchanged, NWLC data shows.

“We are concerned about the public health implications of the pandemic in the short-term and what will happen long-term to parents dropping from the workforce, most of them women who are already facing huge gaps,” said Vasu Reddy, senior policy counsel at the National Partnership for Women and Families. “There will be economic effects of not having this access to leave.”