Workers for Mondelez International, makers of Kraft and Nabisco snacks, are among the first with a contract with terms addressing the coronavirus pandemic.
Photographer: Taylor Glascock/Bloomberg

Long-term effects of the coronavirus pandemic are beginning to pop up in labor agreements as businesses specifically point to the crisis in contract language and average employee pay bumps become more muted.

The average wage increase unions negotiated in the first year of their collective bargaining agreements so far this year fell a tenth of a percentage point to 3.3%, according to Bloomberg Law data. That’s the lowest the figure has been since early January when limited numbers made the figure more prone to movement.

The figure is based on 249 contract settlements added to Bloomberg Law’s database since the beginning of the year. Twenty-seven settlements were added in the most recent biweekly period ending April 22.

“Almost all of the records added to the database this period came from contracts settled since a pandemic was declared by the World Health Organization, so we are definitely seeing a drag on wages caused by the coronavirus crisis,” Bloomberg Law analyst Robert Combs said.

“But with this downward trend starting all the way back in mid-February, it looks like management might have been gaining the upper hand at the bargaining table even before everyone was thinking about the fallout from the virus,” he said.

More than 873,000 individuals in the U.S. have tested positive for Covid-19, the disease caused by the coronavirus, with more than 50,000 deaths as of Friday morning. The disease has led to mass layoffs and strained businesses still in operation as they work to comply with social distancing guidelines.

A recent collective bargaining agreement for workers at ‘s Kraft/Nabisco brands signed April 13 included a temporary $2-per-hour “Covid-19 appreciation bonus” for workers on top of a signing bonus and a 2.25% yearly increase. The agreement with the Bakery, Confectionery, Tobacco Workers and Grain Millers’ International Union is the first contract language in the database that singles out the crisis as a driving factor in its wage provisions, according to Combs.

The overall union-negotiated average wage increase of 3.3% is a tenth of a percentage point above where it was in 2019. 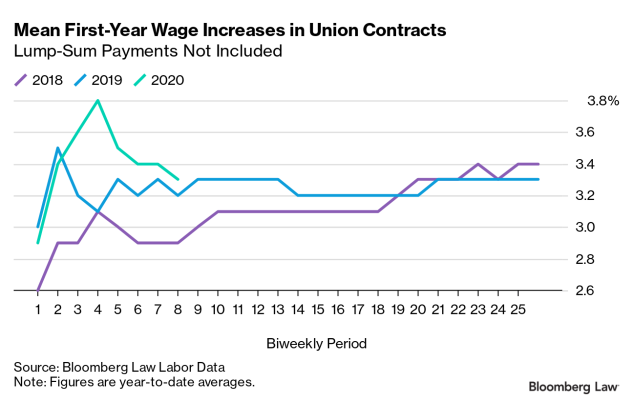 All three industries saw average first-year increases fall by a tenth of a percentage point, the same decline as the overall average.

One-time payments in union contracts have also taken a hit. The average first-year pay increase with those lump sum payments factored in has fallen half a percentage point over the past two months to 3.6%. That’s in line with where the figure was at this point in 2019.