The gaps in paid sick leave availability are getting a fresh look from state lawmakers, as worker advocates and public health experts continue pushing paid leave as a tool to quell the surging 5-month-old Covid-19 pandemic.

Lawmakers in California, Massachusetts, Michigan, Nevada, and Pennsylvania are considering new or revised mandates to fill the gaps in emergency paid sick leave left by the exemptions in the federal Families First Coronavirus Response Act, which one policy group has estimated exempts the employers of 100 million workers. These proposals follow a handful of other states that already extended virus-specific paid leave via legislation or governors’ orders this year, including a recently enacted Colorado law.

The state efforts run parallel and serve as a backup plan to negotiations in Congress for a next round of Covid-19 legislation that could expand paid sick leave coverage—a provision the Democratic-controlled House included in the $3.5 trillion HEROES Act it passed in May. The GOP-led Senate introduced its own $1 trillion package of legislation late last month that omitted the paid leave expansion. The plans also diverge on the issues of expanded unemployment benefits, financial aid to state governments, and liability protections for businesses. A few hundred medical and public health professionals urged President and Congress in a letter on Aug. 3 to ensure paid leave for all U.S. workers through 2021.

“There are significant gaps in the federal law, and unfortunately we’re in a place where the pandemic continues to rage and workers are forced to make these awful decisions” between personal safety and financial well-being, said Jared Make, a vice president at A Better Balance, an advocacy group that supports worker protections including paid leave mandates. “We are seeing states and local governments do what they can.” 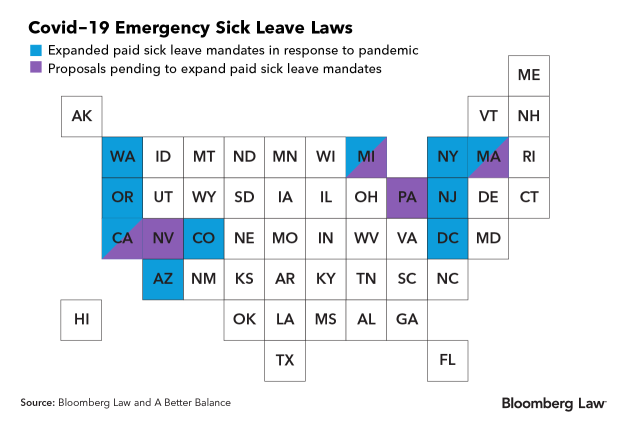 The federal mandate exempted large employers with 500 or more employees, which left out between 68 million and 106 million workers, according to research from the Center for American Progress, a left-leaning think tank. Make said many of those are low-income and essential workers such as grocery store and retail employees.

The federal law also allowed health-care employers to exclude their workers from paid sick leave benefits. A federal judge ruled on Monday that the U.S. Department of Labor had interpreted that provision too broadly.

Business groups generally oppose government mandates for employer-provided benefits because of the cost and compliance burden imposed on companies.

For the NFIB—an association of small businesses averaging 10 or fewer employees—this remains true during the pandemic, said Tim Goodrich, NFIB’s executive director of state government relations. Whenever states do impose a mandate, NFIB argues that it should be narrowly targeted at the pandemic and not allowed to extend beyond it, he said.

“That’s much more preferable to legislation that could possibly take a well-intentioned mandate in response to the pandemic and let it become permanent,” Goodrich said.

A number of state legislative proposals target the gaps in federal law in other ways—taking away the large employer exemption, addressing workers’ needs to care for elderly family members, and extending coverage beyond the federal law’s Dec. 31 expiration date.

In California, a bill pending in an Assembly committee would require large employers that are exempt from the federal law to provide paid sick time for virus-related reasons to essential workers in the food industry. The Nevada legislature also is considering an industry-specific approach, with a proposal that would require Covid-19 protections, including paid sick time for hotel, casino, and resort employees.

Getting service-industry workers who routinely interact with the public to stay home and comply with quarantine instructions when they’re sick is crucial to controlling the spread of Covid-19, said Benjamin Sommers, a doctor and health policy professor at Harvard University’s T.H. Chan School of Public Health. Sick workers are more likely to stay home if they know they won’t lose income, he added.

“This is largely an issue for essential workers and the kinds of blue-collar jobs where you can’t telework,” said Sommers, who co-authored an essay on the topic of paid leave and compliance with quarantine instructions for the Journal of the American Medical Association website.

A Massachusetts bill to extend emergency paid sick leave to all workers who were excluded under the federal legislation got an initial committee approval on Aug. 3. It would allocate $55 million of state funding to reimburse employers’ cost of providing leave.

Massachusetts and California are two of the 13 states plus the District of Columbia that have enacted permanent paid sick leave mandates, so their Covid-19 proposals would supplement those existing leave requirements.

A Michigan proposal also would expand the state’s existing paid leave mandate, including a provision that closes a specific gap in the federal law—allowing workers to use sick leave to care for any family member whose usual care provider is closed due to the pandemic. The federal law only addressed child care, omitting the need to provide care for elderly family members, Make said.

Pennsylvania has no permanent statewide sick leave law, but one Republican lawmaker’s proposal would mandate that employers of “frontline workers” in health-care and service industries provide up to 10 days of paid sick leave for coronavirus-specific reasons. That bill is awaiting committee review and would give employers a way to get reimbursed for 75% of their leave costs through tax credits.

The proposals, if enacted, would add to a list of state and local responses to the pandemic. Arizona, California, Michigan, New Jersey, Oregon, Washington state and Washington, D.C., plus more than a dozen cities and counties including Philadelphia, San Francisco, and Seattle, have extended their paid leave requirements this year to cover virus-specific reasons through a mix of executive orders, administrative guidance, and legislation.

The Colorado measure, which Gov. Jared Polis (D) signed into law in July, provided immediate coverage related to the pandemic for all workers excluded under the federal law. Beginning Jan. 1, employers must let employees accrue regular paid sick time, and during any ongoing or future public health emergency employers must provide supplemental paid sick time up to 80 hours.

Make, who is based in Denver and advocated for the Colorado legislation, called it a “real model of how states can address gaps in federal law.”