California is poised to boost its paid family and medical leave benefits to make using the program more accessible for people with low-wage jobs, or else revert to the lowest benefit levels of any state-run paid leave program.

If Gov. (D) signs a bill waiting on his desk, the measure would increase benefits to replace 90% of low-wage workers’ income during qualifying weeks of leave starting in 2025, and a smaller percentage for higher-income workers. But increasing the benefits as prescribed in the legislation (SB 951) will cost an estimated $3 billion to $4 billion annually beginning in 2025, according to a legislative analysis.

Without the change in law, the nation’s largest and oldest state-run paid leave program will revert to a 55% wage replacement rate on Jan. 1, the lowest of the 11 states that have enacted paid family and medical leave.

“This bill would address a really important inequity in our current program,” said Katie Duberg, political organizing director for the California Work & Family Coalition. “Low-wage workers in California are paying into the program, but the wage replacement is so low that low-wage workers can’t actually use paid leave because they can’t pay their bills.”

Although Newsom has been an outspoken supporter of paid family leave and signed multiple bills to expand California’s program, the Democratic governor vetoed a similar proposal to boost benefit amounts in 2021 because of concerns about increased costs that weren’t accounted for in the state budget.

This time, state lawmakers included a funding mechanism. The bill would remove the cap on payroll tax contributions so that higher-income earners will pay more into the system.

The governor’s office didn’t respond to a request for comment on whether he supports the bill. He has until Sept. 30 to sign or veto it.

The program provides partial wage replacement for workers taking time off to care for a new baby, a seriously ill family member, or their own long-term medical condition, as well as needs related to a family member’s military deployment.

Another bill headed to Newsom for signature would expand the scope of family members covered to include a “chosen” family member, not just biological relatives. 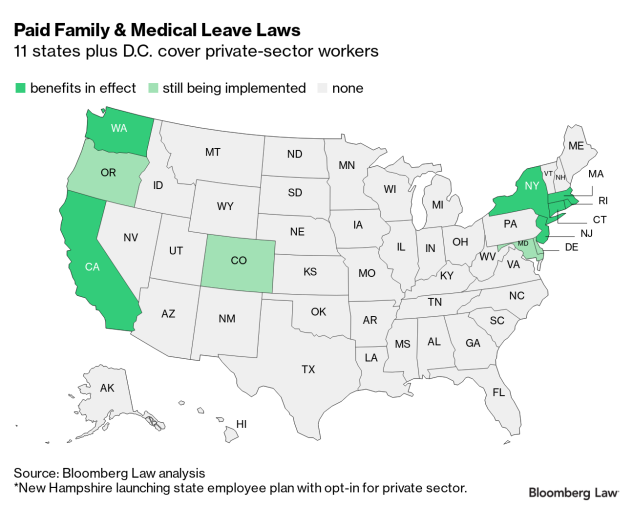 First in the Nation

Eleven states plus the District of Columbia have enacted laws providing paid family and medical leave to many private-sector workers, but several of those states are still rolling out the programs and haven’t begun offering benefits. New Hampshire also is preparing to give private-sector employers and workers the option to buy into a state employee plan.

California was the first to enact paid family leave and is soon to mark 20 years since its passage. The state and several others had state-run disability insurance that covered a worker’s own serious medical condition for decades before that.

The legislation follows a trend among more recently enacted state paid leave laws of emphasizing access for low-wage workers, who are disproportionately workers of color and women, usually by replacing a relatively high percentage of their incomes while they’re out on leave.

California’s current law replaces 70% of income for the lowest-income workers—those making less than $27,000 annually—but 60% for most people. Those current levels are the result of temporary increases first enacted in 2016 and then extended in 2021. They’ll remain the same in 2023 and 2024 if Newsom signs SB 951, but will revert to 55% for all workers on Jan. 1 if he doesn’t.

Since Newsom took office in 2019, the state has made a number of changes to its paid leave program, such as expanding job protections to ensure most workers can return to their job after taking paid leave and increasing the number of weeks available for parental and other family caregiving leave to eight weeks annually, up from six.