Legislation to offer someform of paid family and medical leave has been introduced in at least 18 states in the first two months of 2019.
Photo by Mario Tama/Getty Images

States that are cumulatively home to over 90 million Americans are considering adding some form of paid family and medical leave benefits for workers.

Such “social insurance” bills have been introduced in at least 18 states so far this year. They vary somewhat but would generally provide leave benefits for new parents and for workers dealing with their own serious illness, or a family member’s. The programs typically grant workers 12 weeks of paid leave at a percentage of annual wages and are funded through a combination of employee and employer payroll deductions.

The early legislative flourish this year continues an ongoing trend. Last year, 27 such proposals were introduced in statehouses around the U.S.

Paid leave supporters see the trend as a sign that 2019 might be the year federal lawmakers agree to give families paid time off to become new parents, care for themselves, and care for loved ones. Democrats and Republicans in Congress last year offered proposals to give all workers paid time off, and recently the White House renewed its call for a bipartisan plan.

And there could be more successes for leave advocates due to the proximity effect—states whose neighbors have already passed paid leave stand a better chance of doing the same. 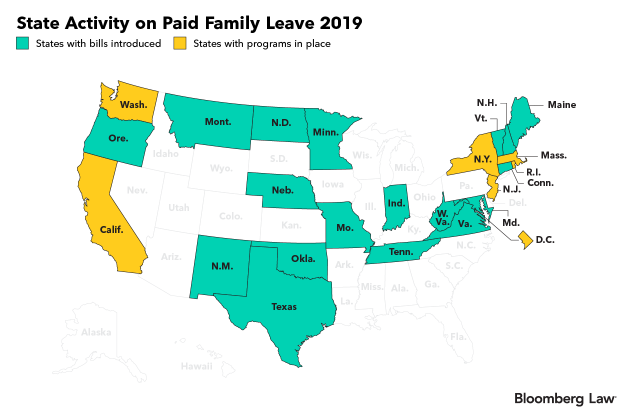 Those six states with paid leave programs could turn into 10 by year’s end, supporters say.

Advocates for paid leave are keeping an eye on bills in Oregon, Connecticut, New Hampshire, Maine, and Virginia, where measures could go far with new Democratic leadership.

In Connecticut, Democrats gained the governorship and the majority in the Senate in November, bringing paid family leave to the forefront of their agenda. Both Senate and House in the state have bills pending (H.B. 5003, S.B. 1) in committee.

Virginia Gov. (D) used his executive authority to grant paid family leave to state workers in July 2018, and he said that order is only the first step in bringing a broader paid family leave benefit to workers there. Democratic lawmakers introduced bills (H.B. 2120, S.B. 1639) that would require the state to establish a paid family and medical leave program beginning in 2022.

In Maine, newly elected Gov. Janet Mills (D) is working with a new Democratic majority in the Senate to pass paid family leave (L.D. 69). The Maine State Legislature in 2018 approved a bill for a paid family and medical leave program, but it was vetoed by then-Gov. (R).

Democrats in Oregon have made several attempts to pass legislation, and Gov. Kate Brown (D) now may support H.B. 3031. “Oregon families are counting on us. They are counting on us so they don’t have to make a choice between paying the rent and staying home with their newborn,” Brown said in her state of the state address Jan. 14.

States with neighbors that already have passed a paid family and medical leave law likely have the best chance, Vasu Reddy, senior policy counsel at the National Partnership for Women & Families, told Bloomberg Law. “I think that geographic clustering of bills makes passing these plans more attractive. First, you can see that it works in states where it’s been implemented. But also, social insurance paid leave is helpful for small businesses because it makes it affordable and possible. I think what you see is that states that are near states that have paid leave want to stay competitive for businesses and workers.”

Efforts to pass paid family leave in predominantly Republican states have a more difficult path ahead. North Dakota lawmakers already voted down a bill introduced in the House early this year.

A similar fate could be in store for bills in Nebraska, Indiana, Oklahoma, Tennessee, Texas, Montana, and West Virginia, in particular. Maryland, Vermont, Missouri, Minnesota, and New Mexico also have paid family leave bills on the table.

But public support for paid leave programs is rising. While many of these bills “face an uphill climb,” politicians are starting to see that these kinds of policies appeal to voters across the ideological spectrum, Reddy said.

The costs of paid family and medical leave programs could even help to spur federal action.

Federal legislators could be pressed to take action on a national program by states where the cost of starting a leave program is a concern, Andrea Zuniga, vice president of legislative affairs at Paid Leave for the United States (PL+US), told Bloomberg Law.

“The states that have passed and implemented paid family and medical leave, they had a structure they could piggy back on,” such as a temporary disability insurance program, Zuniga said. “As more states are looking at how they can create similar insurance models, I think there will continually be budgetary considerations, and that could lead to greater pressure on Federal legislators to take action.”

Moreover, Republican legislators in Congress are exploring budget-neutral options for paid parental leave at the national level. Sens. (R-La.), (R-Iowa), (R-Fla.), and (R-Utah) participated in hearings about paid leave, discussed the issue, or crafted paid leave legislation in 2018, and are expected to continue those efforts this year.