A caravan of vehicles decorated with black ribbons and memorial pictures crawled through Yakima, Washington, last week to mark the death of David Cruz, a 60-year-old fruit warehouse employee who died after contracting . The county, a hub of agricultural activity where workers jam into often crowded factories to package apples and other foods, has the highest per capita infection rate on the West Coast.

It’s a grim reality that’s playing out across the country as Covid-19 spreads beyond the plants that have captured the national spotlight. At least 60 food-processing facilities outside the meatpacking industry have seen outbreaks, with more than 1,000 workers diagnosed with the virus, according to a new study from Environmental Working Group. 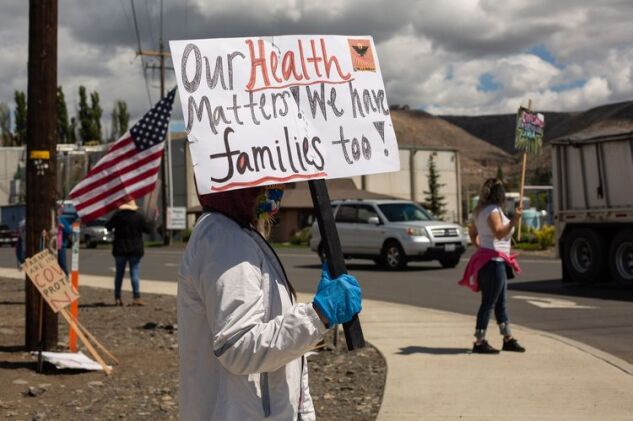 Demonstrators hold signs during a strike outside of a Allan Brothers Fruit apple packing house in Naches, Washington, on May 18, 2020.
Photographer: David Ryder/Bloomberg

These are the first national numbers of their kind. The advocacy group compiled its figures using local media reports because there are no federal agencies reporting the data. The true total is almost certainly higher. Fruit and vegetable packers, bakers and dairy workers are risking infection as the virus spreads through processing plants where employees deemed essential have mostly remained on the job during the pandemic, sometimes laboring in close quarters.

“At our workplace, we were not ready for this virus. We didn’t talk about it. We didn’t know about it,” said Paula Zambrano, a 61-year-old with diabeteswho works part time as a fruit sorter for Borton & Sons in Yakima. She was so concerned by an outbreak at the plant in April that the she didn’t come in for three weeks, but then she had to return to support herself.

“People are infected and they come to work. They keep quiet about it,” she said. “We live from our work. We are surviving from our wages. If we have children, how will we feed them?”

America’s food suppliers have seen some of the worst Covid-19 outbreaks of any industry outside health care. Dozens of meatpacking workers have died, with thousands falling sick. The virus has also spread among employees at farms, where in all likelihood cases will keep climbing as more than half a million seasonal migrants spread out across the nation as the summer harvesting season ramps up.

In addition to the human tragedy, the outbreaks also expose the vulnerability of America’s food supply. The meat industry was already plunged into crisis with plant shutdowns that sparked grocery-store shortages. Even as that situation , more shortfalls of individual food items and ingredients are likely in the months ahead unless the virus’s spread is slowed at food-processing plants, said Kevin Kenny, chief operating officer of Decernis, an expert in global food safety and supply chains. 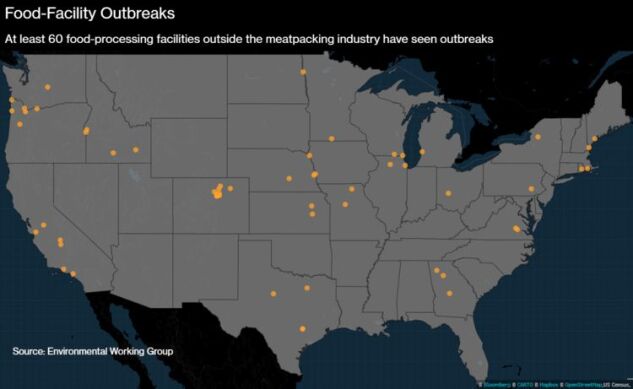 There are about 1.7 million workers at food and beverage manufacturing facilities, of which roughly 500,000 are at meat processors, according to a 2018 U.S. Census Bureau survey.

Unions, advocacy groups and experts have said that employers haven’t done enough to keep workers safe, with protective gear including face masks and gloves not being widely distributed until infections had already started to spread. Conditions inside plants can be crowded, and fast-moving processing lines may not allow enough space for social distancing. The largely immigrant labor-force also faces tough living conditions, with cramped housing -- sometimes in employer provided bunkhouse-style dormitories that can sleep four to 10 to a room.

“As a general rule, the farther back you go in the supply chain, the more difficult it is to have proper social distancing and protective gear,” Kenny said. “Fruit, vegetable, nut and meat processing is a low-margin business.”

About 35% of food processing and dairy facilities have had at least one confirmed Covid-19 case, according to an International Brotherhood of Teamsters survey in May of union locals representing 79 plants. Roughly 80% of employers weren’t testing for the virus and more than a quarter of the workplaces didn’t allow employees to physically distance themselves 6 feet apart, the survey showed.

The Teamsters union is planning a national “call to action” on Wednesday with demonstrations in almost 30 cities for better protection of food supply-chain workers.

Still, the Teamsters have seen a “marked decline” in reports of outbreaks at union-represented food processing facilities in the past several weeks as employers have established more robust safety procedures, said , director of the union’s dairy and food processing divisions. Union-represented employers are doing more no-touch temperature testing, strict adherence to safety protocols, including use of protective gear, and placing portable sanitation stations in workspaces, Aloise said.

Industry trade groups say that employers have invested heavily in measures to protect workers against infection risk while continuing to operate to maintain the nation’s food supply.

But employers have also run into issues because of shifting direction from authorities on proper protective measures. For example, fruit packers were initially told masks were unnecessary and were encouraged to donate inventories for use by health care workers, said Jon DeVaney, president of the Washington State Tree Fruit Association. Employers were then confronted with short supplies of protective equipment when the advice changed, he said.

“We have to stay open to supply essential goods for the American people,” said Geoff Freeman, president of the Consumer Brands Association. Companies have taken many steps to protect workers, including providing protective equipment and by implementing “aggressive” measures to make sure sick employees who stay home are compensated, he said.

The U.S. Centers for Disease Control and the Occupational Safety and Health Administration included food-processing facilities in jointly issued industry-specific guidance for manufacturing. Freeman said more protocols are needed, including, as one example, direction on what portion of positive cases in a workforce should trigger a plant shutdown.

“Make no mistake: We cannot eliminate the risk. The challenge for us is to mitigate the risk,” Freeman said. “You have different companies approaching this in different ways. The more we have federal clarity, the more we can have consistency.”

“Food processing workers, who are disproportionately people of color, are taking enormous and largely avoidable risks to keep the rest of us fed, but the Trump Administration has failed to ensure they are safe,” Faber said. 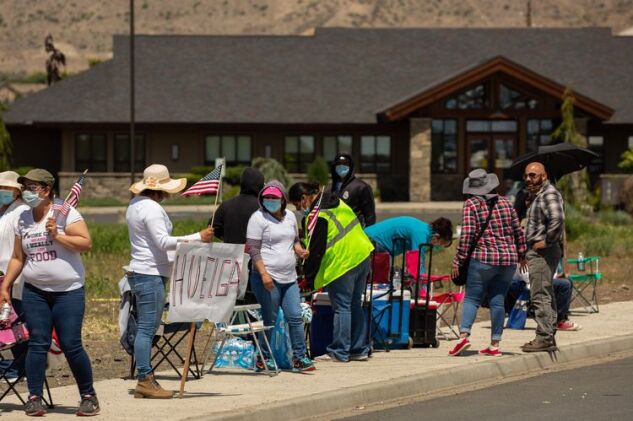 Demonstrators hold signs during a strike outside of a Allan Brothers Fruit apple packing house in Naches, Washington, on May 18, 2020.
Photographer: David Ryder/Bloomberg

In Washington, workers at the company where Cruz had worked, Allan Bros. Inc., held a strike starting on May 7 to demand better protections. Cruz participated in a demonstration May 8, but was sick by the next day, according to Edgar Franks, political director of Familias Unidas por la Justicia, the local union.

After three weeks, a deal was reached between workers and Allan Bros. The company -- located in Naches, just outside of Yakima -- agreed to provide masks to employees and to follow CDC guidance on coronavirus. It also said it would, where possible, require social distancing of at least 6 feet, and where not, it would provide face shields and plexiglass barriers, according to Franks. The company also pledged a temporary $1 an hour raise through June 26, he said.

Allan Bros. confirmed it received a request for comment through its outside public relations firm but didn’t immediately respond further.

Cases in Yakima help to illustrate why the figures from Environmental Working Group are almost certainly an undercount.

Columbia Legal Services, a non-profit legal aid program in Washington state, filed a public records law request for confirmed Covid cases by employer from Yakima County health authorities. It showed 470 cases at 23 fruit facilities as of June 2. The Environmental Working Group’s list shows only 31 cases at one facility from the county. At one Yakima facility, 19% of the workforce had a confirmed coronavirus diagnosis, according to the county list.

“Workers at these packing houses started to get sick in large numbers,” said Franks, whose group helped to organize the memorial caravan for Cruz. “It’s always on the minds of people, that it could be one of them or their friends of family. That’s a real concern.”