For the first time in President ‘s term in office, the number of OSHA inspectors increased from the previous year’s staffing level, according to newly released agency data.

That total is 38 more inspectors than OSHA closed fiscal 2019 with, but still 70 fewer than the agency had in fiscal 2014, before lower budgets forced cutbacks. The 752 inspectors for 2019 was the lowest number ever for the 50-year-old agency.

The growth was partially due to Congress allocating OSHA an additional $12.7 million for enforcement in 2020 and establishing 50 new inspector posts, raising the number of authorized positions to about 818.

Still, the director of occupational safety and health for the AFL-CIO, Rebecca Reindel, said more inspectors are needed. 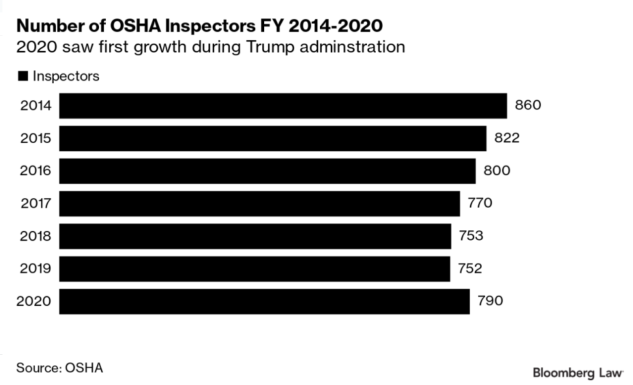 “This increase is not enough to address the widespread safety and health hazards workers face every day,” she said. “These have only been brought to the public eye by the pandemic. The need for worker safety oversight, workplace exposure expertise, and strong safety agency enforcement will not recede when Covid-19 does.”

During his campaign, now President-elect called for doubling the number of OSHA inspectors.

The additional inspectors weren’t enough to boost OSHA’s inspection numbers for 2020. The safety agency conducted 21,598 inspections, down 35% from 2019, according to its records.

The decline was largely because agents had to review and respond to 9,160 Covid-19 related complaints submitted during the year. Inspections focused on health-care facilities and other work sites with virus-related complaints, shifting emphasis away from construction site visits or time-consuming refinery inspections.

The 790 inspectors include 451 safety officers, 269 industrial hygienists who specialize in health inspections, and 70 engineers. During 2020, the agency hired 114 of those inspectors and internally assigned 13 employees to inspection jobs, according to OSHA.

OSHA officials declined to discuss the expanded staffing. In a written statement, an agency spokesperson said the “new inspectors who, working with a cadre of seasoned professionals, increased OSHA’s presence in workplaces across our country.”

In an appropriations briefing earlier this year, OSHA said the newly hired inspectors would likely spend their initial months assisting experienced inspectors and then work on their own in 2021.

The decline in OSHA inspectors began during the Obama administration when appropriation cuts passed by a Republican-controlled Congress forced the agency to trim positions added after Obama’s 2008 election.

At the start of the Trump administration in January 2017, a Department of Labor hiring freeze blocked OSHA from filling inspector positions. The freeze was lifted during that summer, but OSHA wasn’t able to catch up.

With the rise of the Covid-19 pandemic, worker advocates and Democratic lawmakers cited the low number of OSHA inspectors as contributing to the agency’s inability to conduct in-person inspections and respond to complaints.

It’s not clear if OSHA will be authorized by Congress to boost the number of authorized inspector positions in 2021. The Trump administration didn’t seek new positions and the House and Senate have yet to reconcile their appropriation proposals.