Even with unemployment at 70-year highs during the Covid-19 pandemic, employers continue going to court to enforce noncompete agreements and prevent former employees from taking new jobs.

In Pennsylvania, a sports retailer laid off a salesman who had worked there for 31 years and then tried to keep him and other sales staff from taking new positions. A medical provider sued to keep a Houston doctor from opening new offices. Businesses in ongoing legal fights seek to protect their information even though their former employees didn’t have new jobs lined up.

But courts are now starting to balk. Some judges have cited the pandemic in denying employers’ requests to enforce the agreements and forced companies to prove that a worker leaving will cause harm, signaling enough of a turn that employers may at least temporarily think twice about going to court.

“There is a growing trend where courts are actively considering the potential effects of Covid-19 on an employees’ job prospects,” said Eric Tate, chair of the labor and employment group at Morrison & Foerster in San Francisco.

Noncompete agreements are pervasive across industries, from fast-food workers to C-suite executives, even as lawmakers urge a nationwide ban and state legislatures have tried to take measures to tamp them down and carve out exceptions for certain workers, or place limitation on employers.

Roughly half of companies surveyed in a 2019 Economic Policy institute studysaid at least some employees were required to sign a noncompete. Nearly a third said it was required of all employees, regardless of pay or job duties. The EPI study also found these agreements are common even in states where the contracts are unenforceable.

For many employers, noncompetes provide an easy and genuine way to protect trade secrets, said Elizabeth Rowe, a law professor at the University of Florida Levin College of Law, who specializes in trade secret litigation. Small business owners argue they should be able to protect their investment in training lower-wage workers.

But used too broadly, they can create a chilling effect among lower-wage workers that never sees the courtroom, attorneys and academics say.

Noncompetes can still be enforced when workers are laid off, leaving employees who lost their job during the pandemic especially vulnerable. Workers have reported that noncompete agreements are cropping up in severance packages. In May, Spectrum Health, a hospital in Grand Rapids, Mich., gave its more than 1,000 doctors a choice: sign a noncompete agreement or face a 25 percent pay cut, according to the law firm Pinsky, Smith, Fayette & Kennedy LLP.

“There can be a pernicious way to use these, from an employees perspective,” Rowe said. “From an employers perspectives, sometimes they think there are legitimate reasons for investments in research and development.”

A Bloomberg Law search of state and federal courts from March to the end of July show dozens of noncompete enforcement cases being filed since the coronavirus took hold in the U.S.

In noncompete disputes, the outcome varies widely based on state law. Typically the employer will ask early on for a temporary restraining order to stop a worker from taking a new job or opening a new business. To clear this hurdle, generally, the company must prove irreparable harm because of its former employees’ actions.

Some employers over the past few months were met with skepticism from courts at that stage, though litigation continues over the noncompete agreements and trade secrets.

SV Sports, a sporting goods retailer and athletic team supplier in eastern Pennsylvania, tried to enforce a noncompete agreement against former salesman Phil Snyder, who had worked at the company since 1989, when he got a new job at a design firm. The court wasn’t convinced by SV Sports’ request to immediately enforce the agreement, which would keep the sales team from working for a competitor for a year.

It specifically noted that SV Sports decided to lay off the team while the nation faced “the highest unemployment rate in seven decades.” Attorneys in the case didn’t respond to requests for comment.

In Houston, a state court in Harris County went the other direction during the pandemic, granting a request from a pain management clinic against a former doctor, Thuan Dao. The order claimed Dao opened other clinics in direct competition with his former employer.

“While the ongoing pandemic may affect some courts’ willingness to enjoin physicians, our case dealt with a pain-management physician whose practice does not involve the treatment of COVID patients,” the company Cy-Pain’s attorney, Ashish Mahendru, said in a statement. “The court crafted a narrow injunction that enforces the parties’ carefully negotiated non-competition agreement while still allowing the competing physician ample opportunity to see and treat patients across most of the Houston area.”

Noncompete agreements in the medical field is a growing concern, due to the repercussions felt by patients and their doctors during a global pandemic, attorneys and worker advocates said.

Spectrum Health said implementing such contracts for its doctors gave “physicians peace of mind about their jobs and their financial stability” as the coronavirus created financial hardship for the hospital.

But the threat of the contracts keeps workers from looking for new opportunities, said Alex Harman, competition policy advocate for Public Citizen. Such arrangements could mean workers don’t job hunt for higher wages or better treatment. It could even prevent workers who face harassment or discrimination from leaving a job, Harman said.

“I don’t think they should be wiped out entirely,” said Joseph Ahmad, a founding partner in the Houston law firm of Ahmad, Zavitsanos, Anaipakos, Alavi & Mensing. Ahmad represents Dao in the Houston case.

“But the practical effect is that you have to stay where you’re at. Your employer doesn’t have to give you raises to be competitive.”

States including California, North Dakota, and Oklahoma have passed laws that ban the enforcement of noncompetes. Other state governments, in Hawaii, Virginia and Rhode Island, among others, have enacted laws reining in noncompetes while allowing them to still be enforceable for certain industries. 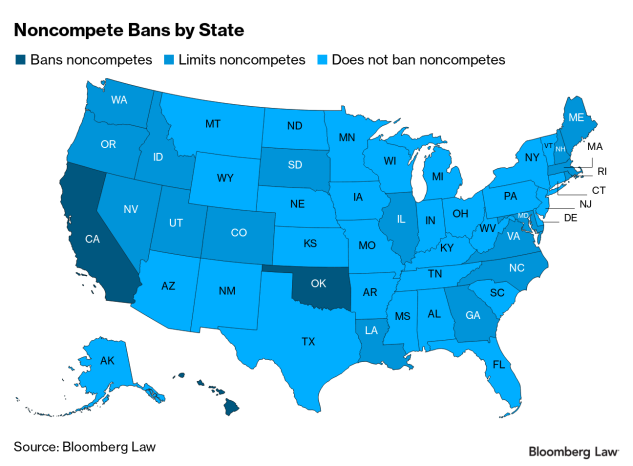 Sens. (D-Conn.) and (D-Mass.) called on the Federal Trade Commission last month to take emergency action to limit employers’ enforcement of noncompete agreements during and after the Covid-19 pandemic. The agency said it’s reviewing material related to a possible rulemaking limiting noncompetes and considering next steps.

Beth Mora, an employment law attorney in California, says her office has experienced a near doubling of calls from workers related to noncompete provisions of severance packages for workers laid off during Covid-19, even those in the health care space—despite California having one of the stricter laws prohibiting their use. She says she is seeing the trend in C-suite and managerial roles, especially.

Workers who know about local restrictions on noncompetes, but are being forced to sign the contracts anyway, are reluctant to fight back given the state of the job market, Mora said.

“There is a fear of losing money, and ruining their reputation by pushing back,” she said.