A woman wearing a facemask walks past a sign informing customers that face coverings are required in front of a Walmart store in Washington on July 15, 2020.
Photographer: ANDREW CABALLERO-REYNOLDS/AFP via Getty Images

Retail and food service workers who face verbal abuse and even physical violence from customers objecting to pandemic mask requirements have little legal guarantee that their employers will protect them.

Customer mask mandates are spreading among states and in corporate America, with announcing its nationwide requirement last week, joining companies like , , and .

At the same time, viral videos and news reports of anti-mask customer outbursts reveal another novel threat to worker safety created by the coronavirus. Employers risk liability for not shielding workers from customer harassment based on race or other characteristics protected by federal civil rights law. But businesses likely won’t be cited on worker safety grounds, attorneys and law professors said.

The Occupational Safety and Health Administration enforces the federal law calling on companies to rid workplaces of “recognized hazards” that can “cause death or serious physical harm” to their employees. Patrons who react to masking requirements by verbally or physically attacking workers likely don’t qualify under that standard from the Occupational Safety and Health Act’s general duty clause, they said.

Employers could insulate themselves from OSHA citations related to customer outbursts over mask policies by adopting virus-protection protocols that mirror guidelines from the Centers for Disease Control and Prevention and industry standards, Fellner said.

The CDC recommends that people wear face coverings while in public to reduce the spread of the coronavirus. But the federal government has sent mixed messages on the issue, with President eschewing masks in virtually all of his public appearances. Trump doesn’t want to issue a nationwide mask mandate, White House press secretary Kayleigh McEnany said at a briefing last week.

Sixteen percent of U.S. adults said they hardly ever or have never worn a mask inside a store or other business during the past month, the Pew Research Center said in a June report. 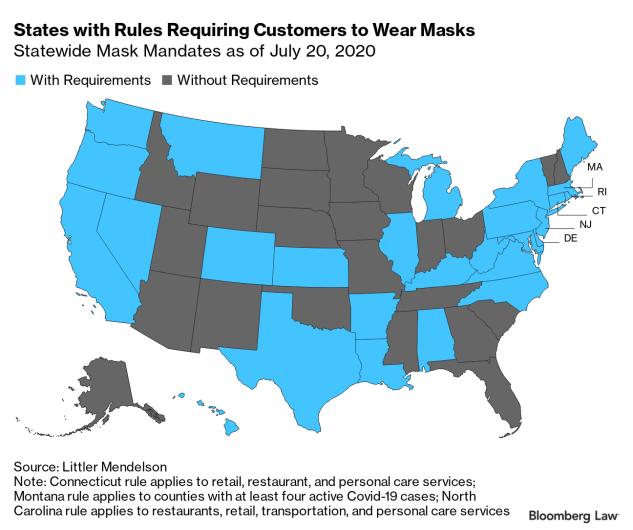 Twenty-seven states have rules in place that effectively require customers to wear face coverings statewide as of July 20, according to analysis of data collected by the law firm Littler Mendelson. Some of those state standards are general, mandating masks in public areas when people can’t socially distance, while others spell out that they must be worn in business establishments.

Illinois, Oregon, Kansas, Nevada, and Montana put the onus on companies to require that their customers wear masks. Michigan, Pennsylvania, and Delaware specify that businesses must deny entry to customers who refuse to don face coverings. Washington calls on business to deny services to maskless patrons.

“Mask requirements protect workers and create legal and social norms,” said Terri Gerstein, director of the State and Local Enforcement Project at Harvard University’s Labor and Worklife Program. “Not having mask requirements makes it exponentially harder for businesses to require them, and it sets up workers at retail establishments and in the service industry to have exactly these kinds of confrontations.”

Many retail stores are enforcing mask rules where applicable by posting signage and reminding customers, said Mary McGinty, a spokeswoman for the National Retail Federation, a trade association representing thousands of retailers across the U.S. But most retailers instruct their employees to avoid confrontations, similar to the way many retail workers aren’t supposed to chase shoplifters, she said.

“Many retailers have said they do not want to become the face mask police, and that if states and local governments want mask requirements strictly enforced they should provide law enforcement officers to do so,” McGinty said.

, which operates a chain of grocery stores that includes Ralphs, Harris Teeter, and King Soopers, said it will roll out its mandatory mask rule for customers on Wednesday.

But Simone Stanback, a deli clerk at a Ralphs in Los Angeles, told Bloomberg Law that management has given her no training or support on how to deal with maskless patrons. California requires face coverings when in enclosed areas around other people. While most customers have been wearing masks, they tend to keep them pulled down around their chin, she said.

“We have to tell customers, ‘Please, do not drop your masks,’” Stanback said. “A couple of times I’ve had to go to the security guard and say, ‘This person is walking around with no mask.’”

Stanback said she hasn’t experienced any workplace confrontations with customers over masks. Not all workers have been as lucky.

Although it’s unclear how pervasive anti-mask customer outbursts have become, news reports have highlighted some notable examples: a patron at a barbecue restaurant in Kansas City allegedly flashed a gun at a worker after being told about the statewide mask mandate; a drive-through customer at an Oakland McDonald’s allegedly attacked a worker after being denied service for not wearing a mask; a Los Angeles taco restaurant temporarily shut down allegedly due to anti-mask customers harassing the staff.

Some incidents of customers apparently lashing out at workers because of mask requirements have been caught on video and uploaded to social media. 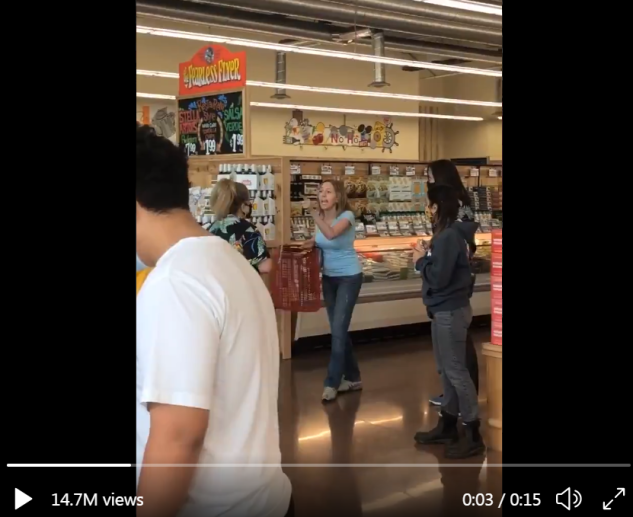 “Stores have rules against people coming in barefoot or without a shirt, and have figured out ways to enforce,” said Debbie Berkowitz, a former OSHA official and now the worker health and safety program director at the National Employment Law Project. “Workers can’t be enforcers of a requirement that could endanger them.”

But Berkowitz said the problem boils down to the failure of the federal government to issue protections for workers.

When asked about OSHA’s efforts to keep workers safe from anti-mask customer attacks, a Labor Department spokesperson pointed to the pre-pandemic guidance materials on the threat of workplace violence on the agency’s website. The most recent document available was a two-page brochure, published October 2019, on how taxi drivers can avoid being robbed or assaulted.

“Where the employer is in a high-risk industry for workplace violence (healthcare, corrections, taxi service, or late-night retail) or the violence is otherwise reasonably foreseeable, the employer may be required by the General Duty Clause to take steps to eliminate or minimize the hazard,” the spokesperson said in a statement.

OSHA, which hasn’t had a Senate-confirmed chief during the Trump administration, successfully fought off an AFL-CIO lawsuit that tried to force the agency to issue a temporary emergency standard to protect workers from the direct harm of the virus.

Even though federal workplace safety law likely doesn’t apply to customers angry about masks, employers can face liability if they don’t protect workers from customer harassment that’s based on race, sex, or other categories covered by Title VII of the 1964 Civil Rights Act.

Specifically, workers can bring Title VII claims related to customer harassment if their employer failed to take action to prevent harassment from continuing, said Jeffrey Hirsch, a labor and employment law professor at the University of North Carolina School of Law.

Employees who are hurt by rampaging anti-mask customers could be entitled to cash payments and medical expenses under workers’ compensation systems, but it’s not guaranteed, said Michael Duff, a law professor at the University of Wyoming College of Law who’s written extensively on workers’ compensation.

For a physical injury, whether they’re due compensation generally comes down to workers proving that being in the job increased their risk of harm as compared to the general public, Duff said.

But most states don’t cover emotional distress under their workers’ compensation laws, he said.

“As a general rule,” Duff said, “those claims will generate resistance and frequently will be litigated.”