An anti-union group has asked the National Labor Relations Board’s top ethics officials to bar its two new Democratic board members from involvement with the agency’s Trump-era rule on joint employment, which is under review in a pending federal court case.

The National Right to Work Legal Defense Foundation targeted NLRB members Gwynne Wilcox and David Prouty for removal from the case based on their prior work for affiliates of the Service Employees International Union, which is challenging the regulation. The organization made its case to David Berry, the NLRB inspector general, and Lori Ketcham, the agency’s designated ethics official, in a letter earlier this week.

Wilcox and Prouty shouldn’t make any decisions or provide advice on either the agency’s joint employer rule or the ongoing litigation in the SEIU’s lawsuit, the foundation said. The pair also shouldn’t be involved in any cases involving the SEIU or its affiliates, it said.

The letter signals that pressure to step away from cases and regulations could haunt the Biden administration’s two NLRB appointees, who both had long careers as union lawyers before joining the board.

The call to remove Wilcox and Prouty from legal matters involving the joint employment rule appears partly motivated by recent history—former Republican board member William Emanuel was tagged for an ethics lapse, which submarined a precedent-setting ruling on joint employment that preceded administrative rulemaking on the issue.

“I urge you to apply the same level of vigor in examining their conflicts as was done in matters involving former Member William J. Emanuel,” Mark Mix, the foundation’s president, told agency ethics officials in the letter.

Wilcox and Prouty were seated in August, giving Democrats control of the labor board. The new members are committed to following their ethics obligations and working with the designated ethics official to determine their duty to recuse themselves from “any matter, including the joint-employer rulemaking and any related litigation,” NLRB spokeswoman Kayla Blado said.

The legal standard for determining when one company is jointly liable under federal labor law for another firm’s workers has been one of the most hotly contested issues that the NLRB has dealt with in recent years.

The issue was central to the board’s 2015 ruling in Browning-Ferris Industries; the agency’s massive, long-running case against that was settled in the company’s favor and is now under appeal; the 2017 ruling in Hy-Brand Industrial Contractors that was withdrawn because of Emanuel’s conflict; and the 2020 regulation that was issued by a three-member, all-Republican board.

The rule favors businesses by requiring a company to exercise substantial, direct, and immediate control over the most important elements of a worker’s job to be deemed a joint employer. 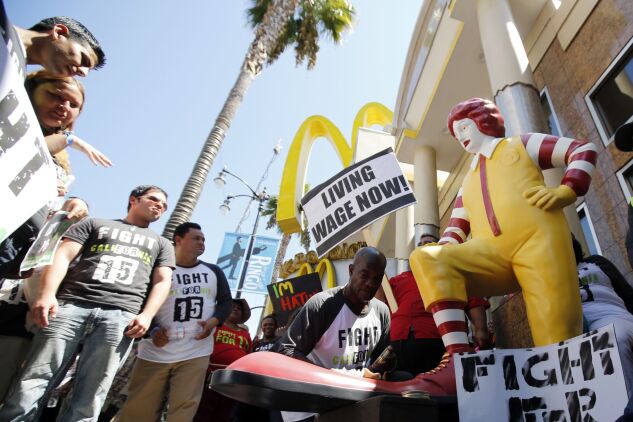 Fast-food workers take part in a demonstration outside a McDonald’s in Los Angeles in 2013; it was organized by the Service Employees International Union and demanded workers receive $15 an hour.
Photographer: Patrick T. Fallon/Bloomberg

SEIU sued the NLRB last month in federal court in Washington, D.C., attacking both the board’s regulation for being “arbitrary and capricious,” disregarding the significance of companies’ control over safety conditions, and failing to comport with federal labor law.

The five-member NLRB—which is controlled by a three-member Democratic majority—will probably direct the general counsel’s office to tell the court that it plans on revisiting the joint employer standard in rulemaking, said former board chair Wilma Liebman.

The board may have the latitude to reach a settlement in which it indicates that the rule won’t be enforced and will be rescinded or modified, Liebman said.

But if Wilcox and Prouty were forced to recuse themselves, the Republican board minority would apparently gain control of the case and any attempts to change the joint employer regulation.

Prouty previously served as general counsel for SEIU 32BJ and included the union on his recusal list.

But the distinction between that New York City-based affiliate and the SEIU international is “meaningless in this context” because of the control that the international exerts over its affiliates, the foundation told the NLRB ethics officials.

The foundation made a similar argument to remove former NLRB member Craig Becker, a Democratic appointee during the Obama administration, from a case involving an SEIU affiliate. Becker had served as associate general counsel of the SEIU international prior to joining the board.

Becker declined to recuse himself in Service Employees Local 121RN, saying in the 2010 ruling that courts have recognized that local unions are separate and distinct legal entities from the international unions with which they’re affiliated.

The NLRB revamped its ethics policy protocols during the Trump administration and gave members the power to override the judgment of the agency’s ethics official if they “insist” on participating in a case. Some government ethics specialists, however, have said the authority the board gave itself may run afoul of government regulations.

In addition to Prouty’s work with SEIU 32BJ generally, the foundation argued he should be removed from matters involving the joint employer rule because he filed lengthy comments on the union’s behalf opposing the regulation.

As with Prouty, the foundation cited Wilcox’s “key role” in 1199SEIU’s opposition to the joint employer rule as a reason to remove her from related matters. The union filed comments during the rulemaking that were critical of the effort.

In addition, Wilcox represented Fight for $15, an SEIU-backed group that advocates for low wage workers to make more money and to obtain union representation. That group is not on her recusal list, which covers clients and former employers from two years prior to her appointment.

The foundation said that Fight for $15 appeared in SEIU’s lawsuit challenging the joint employer rule, which named that group as a core part of the litigation.

Wilcox’s and Prouty’s records show that they “both have blatant conflicts of interest that no fair-minded person can ignore,” the foundation said.