The National Labor Relations Board seal hangs inside a hearing room at its Washington headquarters.
Photographer: Andrew Harrer/Bloomberg via Getty Images

The U.S. Court of Appeals for the Ninth Circuit will hear oral argument Wednesday over an Oregon federal judge’s ruling that directed the broadcasting company to bargain with an affiliate of the National Association of Broadcast Employees and Technicians. The judge issued the order based on the NLRB’s claim that there would be irreparable harm to bargaining without the order.

The injunction against Nexstar was one of a handful that NLRB General Counsel Jennifer Abruzzo cited in an August memo pledging to “aggressively” seek court orders to halt ongoing unfair labor practices while her office litigates the underlying cases before administrative law judges or the board.

But the NLRB general counsel’s office needs to win over courts to get what are known as 10(j) injunctions, named after the section of the National Labor Relations Act empowering the board to ask federal courts for temporary orders to stop violations.

“Section 10(j) of the National Labor Relations Act is literally the teeth of the act,” said Julie Gutman Dickinson, a union-side lawyer with Bush Gottlieb. “It’s the way to get sharp, biting, swift relief in federal court to prevent remedial failure.”

Remedial failure happens when the board takes years to rule that an employer violated the law—and the damage can’t be fixed by the time its decision is issued, said Dickinson, a former NLRB lawyer. For example, unlawful terminations of lead union organizers can kill a unionizing campaign even if a company is later required to reinstate those workers, she said.

The general counsel’s office needs the NLRB’s permission to seek court orders in ongoing cases. Board authorizations for injunctions plummeted during fiscal year 2018 to fiscal year 2020, according to agency statistics. Trump-appointee was the general counsel and Republican members controlled the board during most of that time. 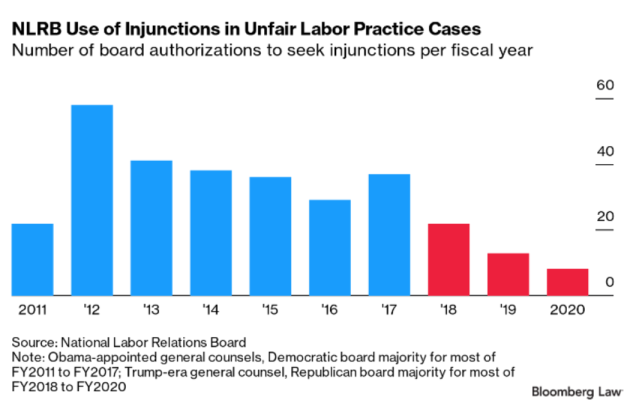 The agency has won some significant 10(j) injunctions from district courts in 2021, which has triggered employer appeals.

The Ninth Circuit will consider another case in October after Nexstar’s bid this week to escape a federal judge’s bargaining order, which turns on circuit precedent for what the NLRB needs to show to win a 10(j) injunction.

The circuit court on Oct. 14 will hear oral argument in Red Rock Casino Resort & Spa’s challenge to a federal judge’s July order requiring it to recognize and bargain with the Culinary Workers Union as the representative of 1,300 of its employees.

The case stems from a labor dispute between the Texas-based broadcaster and Local 51 of the National Association of Broadcast Employees and Technicians, which represents workers at Nexstar’s KOIN-TV television station in Portland, Ore. Nexstar and Local 51 bargained for more than two years over a successor contract without reaching a deal.

The NLRB regional director in Seattle, , hit Nexstar with a board complaint in June 2020. Hooks accused the company of unlawfully withdrawing recognition from Local 51 as their workers’ bargaining agent, making unilateral changes to job conditions, coercing employees, and committing other unfair labor practices.

Hooks petitioned an Oregon federal court for a 10(j) petition in February—seven months after the complaint was issued, 12 days after President Joe Biden fired the Trump-era general counsel, and a week after Biden tapped Peter Sung Ohr to be the acting general counsel.

District Judge granted the petition in March, ordering Nexstar to recognize and negotiate with Local 51. Hooks met the legal burden for an injunction, which includes establishing that the agency was likely to prove its allegations against the company and that there would be irreparable harm absent a court order, the judge said.

Mosman said he was “concerned” about Hooks showing that there would be irreparable harm. But under the Ninth Circuit’s 2011 decision in Frankl v. HTH, there’s an inference of irreparable harm to union representation from withdrawal of recognition if the NLRB can show a likelihood of success on the merits.

“In the absence of any contrary evidence, I apply the inference stated in Frankl—an inference that grows in strength the longer the time gap between the withdrawal of recognition and the request for injunctive relief,” Mosman said in his ruling.

Nexstar argues in a brief to the Ninth Circuit that Mosman incorrectly applied an “automatic inference” of irreparable harm. The view that the inference is mandatory runs counter to U.S. Supreme Court rulings that reject rigid conditions for issuing or denying injunctions, while also drastically lowering the threshold for winning such a court order, the company said.

“The paradigm created by the District Court’s construction of this Court’s precedents is one in which injunctive relief is a routine, rather than extraordinary, remedy in such cases,” Nexstar said.

The NLRB disputed Nexstar’s characterization of Mosman’s ruling, telling the in Ninth Circuit in its brief that the judge didn’t apply a mandatory presumption of harm.

In response to a request for comment, NLRB spokeswoman Kayla Blado pointed to Abruzzo’s Aug. 19 comments pledging to aggressively seek injunctions. “I believe that Section 10(j) injunctions are one of the most important tools available to effectively enforce the Act,” Abruzzo said.