The United Auto Workers began a round of collective bargaining with Ford, GM, and Fiat Chrysler on July 15.
Photographer: Jeff Kowalsky/Bloomberg

The United Auto Workers, one of the country’s largest and most storied unions, will be fighting for more than just strong contracts when it begins a contentious round of collective bargaining with the “Detroit Three” automakers—, , and —July 15.

Scarred by embezzlement scandals, blindsided by plant closures, and shepherded by new leadership, the UAW has concessions to win back from the auto industry and trust to regain from a declining membership wary of job losses and corruption revelations.

The talks will provide the union an opportunity to secure itself against the headwinds of a quickly changing auto sector and prove its worth to members.

The negotiators fighting to realize those goals are largely new to bargaining on such a large scale.

But that newness doesn’t mean this is a “fresh team,” according to Marick Masters, a management professor and the director of Wayne State University’s labor studies program. The negotiators have had plenty of experience within the UAW and local-level bargaining, Masters said.

“These folks have been with the UAW for a long time,” Masters said. “And each one of them has institutional memory and knowledge of previous negotiations.”

The UAW declined to make its negotiators available for interviews ahead of the talks. 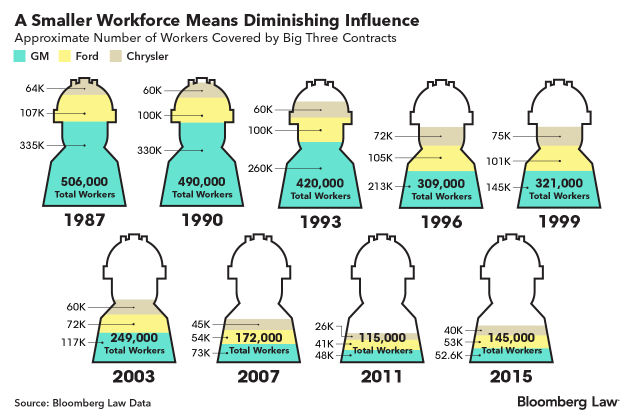 The UAW is likely to play offense in this series of negotiations, according to Masters. It’s looking to add to achievements in 2015 negotiations that ended years of union concessions.

Some of the union’s most pressing priorities were revealed at a special bargaining convention in March. Delegates approved a resolution that said negotiations should focus on targeted wage increases, decreasing the use of temporary workers, and winning new investments that would prepare workers for emerging technology.

Jones put bargaining in the context of a fight, telling members that the union is “preparing for conflict.”

“We are choosing to rely on ourselves rather than rely on the goodwill of others,” the president said in March. “That battle may not come if others see how serious and how ready we are because we are one.”

The union backed up its words with action, announcing an increase in strike pay and benefits for workers.

U.S. carmakers have shed hundreds of thousands of union jobs in the past three decades. More than 500,000 American auto workers were covered under collective bargaining agreements in 1987. By 2015, that number was up from prior negotiations at 145,000 workers, but a mere fraction of the total from decades prior.

As automakers have cut workers, the union that represents those employees has less leverage in talks, according to researcher Joshua Murray. He’s the author of “Wrecked,” a new book on the American auto industry.

“Even though the UAW is one of the stronger unions that exists, the structure of labor is not strong,” Murray said.

After years of adding members, the UAW shed more than 35,000 members last year, according to Department of Labor filings. But the union says that number was due to when dues were received and isn’t accurate.

If membership did decline, it could mean a worse negotiating position.

“Leverage at the bargaining table depends on a lot of factors, but it’s no coincidence that the two most generous UAW-Big Three contracts of the past 30 years were ratified following two years of positive membership growth for the union,” said Bloomberg Law analyst Robert Combs. 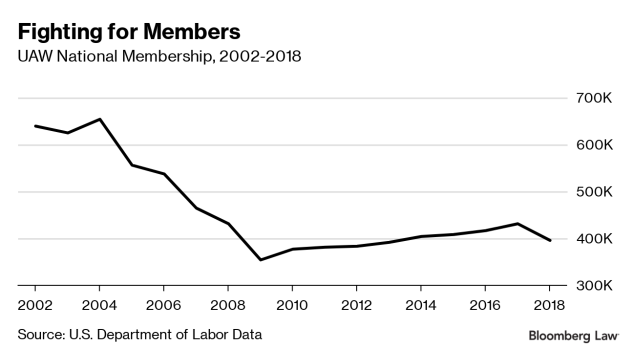 “I’m guessing they won’t get much,” Murray said. “Because the U.S. companies are so shaky, there’s the threat of if you demand too much, we’re going to fail and you’re going to lose all your jobs.”

Prior comments by company executives suggest some opportunity exists to address the plant closures in negotiations. GM Chief Executive Officer Mary Barra told lawmakers in December that the fate of the plants would rely on union talks.

The UAW sued GM in February over the closures, alleging breach of contract. GM tried several times to get the case dismissed without success. It’s continuing to try and convince the court to drop the case.

Beyond the plant closures, the union will also want to secure wage increases that go beyond one-time payments.

In the previous four Big Three auto contracts spanning 16 years, employees received base wage increases in four of those years. Workers received one-time bonuses the other years. That’s due in large part to the auto companies’ weak position in the lead-up and aftermath of the Great Recession.

“In the past few negotiations, the automakers have been more successful than ever at switching out annual wage hikes for annual, one-time bonus payments, which save money by not building up base salaries year upon year,” Combs said. 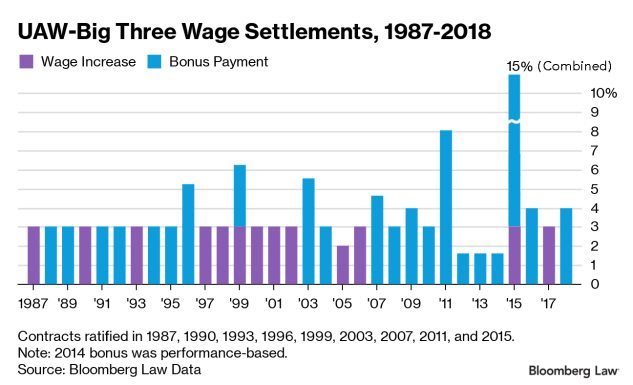