A new Trump administration regulation making it harder for workers to sue multiple employers for wage violations is already generating significant questions about how much sway it will have on federal courts.

The Labor Department said the rule will decrease the risk of court battles for some businesses, like franchisers and those who use contracted labor. The regulation narrows the circumstances in which two or more companies can be “joint employers” who share legal liability for paying employees minimum wages and overtime.

The agency is hoping the rule will foster a more uniform view from courts on joint employment, providing more clarity for businesses and workers. Yet even as business groups and Republican lawmakers praised the rule for promoting clarity and for retreating from the Obama administration’s more expansive approach to joint liability, both management and plaintiff lawyers agreed it won’t necessarily shield companies from joint employment lawsuits.

The regulation establishes how the department will determine joint employment when investigating and prosecuting wage violations under the Fair labor Standards Act. Some courts have taken a different approach to the joint employer question, however, and don’t necessarily need to adopt the four-part test established in the new regulation. 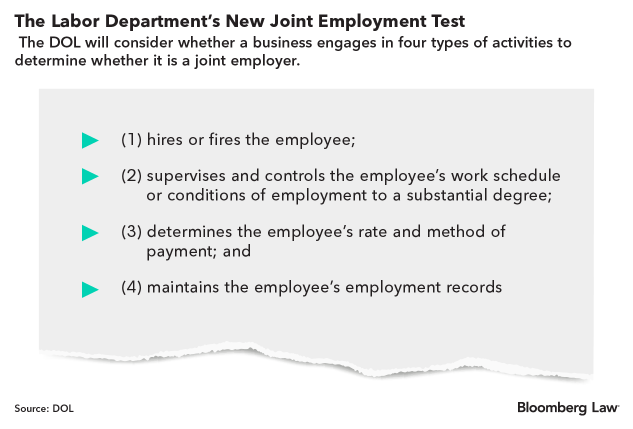 The rule is an interpretive regulation, meaning it’s not likely to get as much deference in court as other “legislative” regulations. Judges must decide how much weight to give to the DOL in determining whether to apply the department’s new four-factor test for joint employment, or base their decisions on a broader set of circumstances.

“If anything, litigation will increase over whether courts should follow decades of precedent or give deference to the Department’s new narrow guidance,” said Michele Fisher, who represents workers at Nichols Kaster in Minneapolis.

Central to the final rule is DOL’s adoption of the four-part test for assessing whether one company is a joint employer of another company’s workers. The test, which considers all factors collectively, probes whether the potential joint-employer hires or fires an employee; supervises or controls work schedules; sets pay rates; and maintains employment records.

Some courts, most notably the U.S. Court of Appeals for the Fourth Circuit, have used a broader, six-factor test to determine joint employer liability under the FLSA. That analysis probes the relationship between the potential joint employer and the workers, but also between the two or more companies alleged to share liability.

While the influence on judges remains to be seen, a more concrete impact will come in the Wage and Hour Division’s own enforcement of the rule, once it takes effect March 16.

“Regardless of how much deference a reviewing court would give to the rule, an interpretive rule definitely sets forth the DOL’s policy for overtime and minimum wage enforcement, which provides certainty to businesses subject to a DOL audit or investigation,” said Susan Harthill, a partner at management firm Morgan Lewis in Washington who was previously the department’s deputy solicitor.

“Clearly this is the secretary and the wage-and-hour administrator saying this is our interpretation of joint employment, it’s very narrow, and we’re not going to pursue it in lots of cases that historically, even under this administration, they have,” said David Weil, who ran the Wage and Hour Division under President . “This is going to clearly dampen both the solicitors’ and wage-and-hour investigators’ use of joint employment as a concept.”

With Weil in charge, the agency issued a guidance in 2016 calling for broad application of joint employment under the Fair Labor Standards Act. That document was summarily withdrawn in 2017 by Trump’s first labor secretary, Alexander Acosta, who argued it was invalid because it didn’t go through public notice and comment.

The revoked guidance was intended to clarify how private courts interpreted joint employment, without changing the law, Weil said.

But the WHD didn’t replace that guidance with a new policy, until now. During the two plus years since the Weil guidance was taken down, some of department’s wage-hour enforcers have continued to apply a set of factors in pursuing joint employment cases that are now completely contradicted by this rule change, said Dane Steffenson, who left the DOL Solicitor’s Office this month after 17 years as a senior trial attorney.

Steffenson pointed in particular to the new rule’s list of certain factors that the department says are not relevant in considering joint employment. Among them, the DOL said it won’t look at an employee’s economic dependence on a potential joint employer.

“There is no doubt that investigations and probably cases exist where factors” the rule states are “not to be considered have already formed the basis for DOL telling a company it is liable,” said Steffenson, who prosecuted joint employment cases for DOL.

Not for Safety Enforcement

The rule doesn’t apply to the Occupational Safety and Health Act, a senior Labor Department official said on a Jan. 12 call for reporters.

Attorney Adam Young, an associate with Seyfarth Shaw in Chicago, said the Occupational Safety and Health Administration has followed its own multi-employer citation policy, last revised in 1999.

Matthew Cooper, a principal with Squire Patton Boggs in Denver, said that in some circumstances, OSHA’s policy is broader than the new WHD rule. OSHA could cite a company that creates a safety hazard, but doesn’t employ the worker potentially endangered by the hazard, Cooper said.

There are a number of wage and hour joint employment cases percolating across the country. Attorneys on both sides likely will soon file pleadings calling attention to the new rule.

“I think that we will see a flurry of activity in court filings, raising the final rule as an additional clarifying factor,” said Brett Bartlett, a partner at management law firm Seyfarth Shaw. That includes some companies who will be filing motions for reconsideration after a judge already ruled for workers in a case.

Workers’ lawyers sometimes name all potential defendants in a joint employment complaint “as leverage to try to settle,” Bartlett said. But as a result of this rule, “more plaintiffs’ attorneys may be more cautious about naming more potential joint employers. I would suspect that ... I’d be able to have a better shot of convincing the plaintiff’s lawyer to drop the indirect joint employer, leaving only the direct employer in the case now.”

It’s “certainly possible” that some workers’ attorneys will decide the new rule makes it not worth their energy to file new FLSA joint employment claims, Justin Swartz, a partner at Outten & Golden in New York, said.

“But the plaintiffs’ firms that I know and respect will take it on a case-by-case basis and certainly aren’t afraid to confront obstacles like this one,” Swartz said. “We’re a creative group and almost always find a positive way forward.”

—With assistance from Bruce Rolfsen