A majority of the National Labor Relations Board’s 26 regional offices have at least one vacancy or temporary appointment in leadership, creating top-level personnel gaps that some observers say can hinder the agency’s work and sap employee morale.

Effective management at the regional level is crucial to the agency’s mission because of the sheer volume of work that the offices handle, former NLRB officials and staffers said. The regional offices are responsible for processing unfair labor practice charges and representation petitions, investigating cases, issuing complaints when charges have merit, authorizing union elections, and litigating matters before administrative law judges.

Staffing and management of regional offices have been especially hot points of contention at the NLRB since became the agency’s general counsel in 2017. Robb considered reorganizing regional operations, but he eventually abandoned that plan after regional directors expressed “grave” concerns over it. Robb has since downplayed that proposal, repeatedly saying there was no specific plan and he was simply soliciting suggestions for improvements.

The regional offices are suffering a “staffing crisis,” the union representing regional NLRB employees said last year. The agency’s regional workforce stood at 825 employees as of September 2019, representing an 11% drop from 2017 levels and a 27% decrease since 2011, according to the union’s most recent estimates.

The agency encouraged staffers to leave by instituting early retirement and buyout programs in 2018. With rising labor costs and a flat budget, the NLRB can afford fewer workers, Robb has said. Meanwhile, the agency failed to spend $5.7 million of its budget for fiscal year 2019, which triggered an inspector general investigation.

“The Agency’s Division of Operations-Management is constantly assessing the needs of each Region based on caseloads,” NLRB spokesman Ed Egee said in an email.

Evidence shows the NLRB is aggressively enforcing federal labor law, he said, pointing to statistics showing that the agency improved its case processing time by 17.5%, nearly meeting its goal of a 20% reduction by 2022 in just one year.

Regions on the Front Line

The NLRB is a decentralized agency, with decision-makers distributed around the country and close to the communities where the cases originate, former agency staffers and officials said. Regional offices handle the vast majority of cases filed with the NLRB, settling nearly 6,000 cases in fiscal year 2019, or 99% of the cases that came before them.

The traditional leadership structure at the NLRB’s field offices features a regional director (RD), who wields power delegated from both the board and the general counsel; an assistant to the regional director (ARD), who acts as a chief of staff and oversees representation cases; and a regional attorney (RA), who manages litigation. 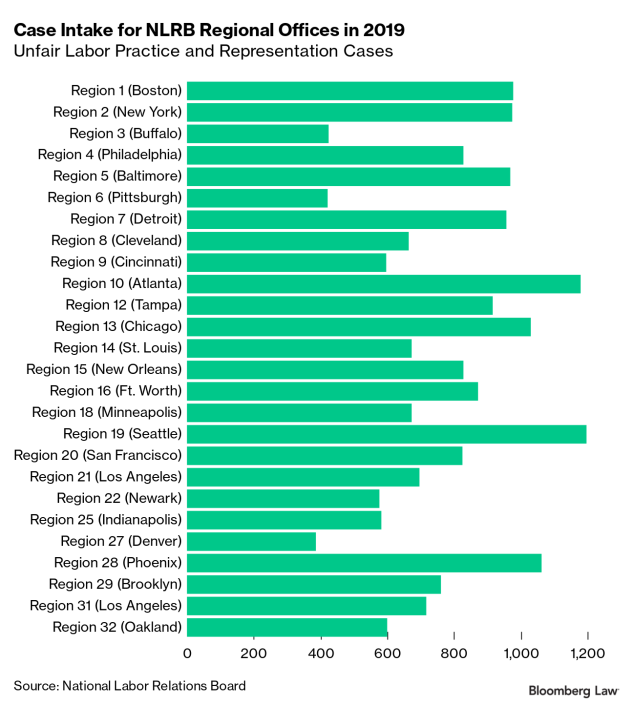 Offices with vacancies or temporary appointments:

“Anytime there’s a significant number of vacancies, it has the potential to have real adverse impacts on case handling, which is not good for the employers, unions, and individual employees who come before the agency,” said Marshall Babson, a former Democratic NLRB member who represents management for Seyfarth Shaw.

The regional office in St. Louis, which covers labor disputes and union elections across areas in five states, is the hardest hit, with an acting regional director and no assistant regional director or regional attorney. Cindy Flynn is set to take over for Mary Taves as acting RD, according to Egee, the NLRB spokesman. Flynn would be the office’s third temporary chief in less than a year.

The NLRB’s inability to fill the open spots casts doubt on the political leadership’s commitment to the agency’s mission to administer the National Labor Relations Act, said Michael Duff, a former NLRB attorney who worked in the Philadelphia and Minneapolis regions.

“It’s very hard to accept that you would allow this state of affairs to continue if you have serious intentions of enforcing the act in good faith,” said Duff, a labor law professor at the University of Wyoming.

Congress addressed the NLRB’s staffing vacancies, including those in regional leadership positions, in the government funding bill that was finalized in December. The measure contains language directing the agency to post announcements of vacant positions “to restore critical field staff capacity and to more aggressively fill vacancies in fiscal year 2020, including the remaining open regional director positions.”

The NLRB is also required to brief lawmakers on its plans to fill staffing vacancies and report on staffing and resources at regional offices.

Democrats on the House Committee on Education and Labor focused on Robb’s plan to restructure the regional offices. That plan has left important positions unfilled for too long, said Committee Chairman Bobby Scott (D-Va.).

“If these positions remain vacant, it will significantly hinder the Board’s ability to swiftly remedy unfair labor practices and will undermine workers’ right to organize,” Scott said in a statement.

The NLRB has posted announcements for the regional director position for St. Louis and the hiring process is ongoing, according to Egee. Announcements for RDs for Cleveland and Cincinnati should be posted this week, he said.

The agency didn’t get any viable candidates to lead the Boston and Atlanta offices, so it will repost those open regional director positions, Egee said.

For ARD and RA positions, the NLRB determines whether empty posts need to be filled on a case-by-case basis, Egee said. Regional directors are consulted and there are no hard and fast rules, he said.

The union representing regional NLRB employees says the agency’s refusal to fill regional staffing vacancies makes it less effective because the quality of the decision-making process primarily relies on managers and staffers expertise and institutional knowledge.

“When they chip away at the people throughout the decision-making tree, from Administrative Professionals and Board Agents to Regional Directors, when they saddle us with additional duties outside of our roles, and when they bark at us to do more with less, the entire process is seriously compromised, and the institution is undermined,” NLRBU President Burt Pearlstone said in a statement.

The impact of leadership gaps in regional offices, however, depends on how busy they are and the experience level of the staff overall, said Terry Potter, a former NLRB field attorney now with the management-side firm Husch Blackwell. Having an ARD or RA could be “overkill,” Potter said.

Regional directors should ideally have ARDs and RAs to assist in offices that have caseloads of about 1,000 per year, said Joseph Frankl, former regional director in San Francisco.