The National Labor Relations Board seal is displayed inside a hearing room at the agency's headquarters in Washington, D.C.
Photographer: Andrew Harrer/Bloomberg

Union elections could see more allegations of unlawful employer conduct as a result of the National Labor Relations Board’s recently issued rule to extend the union election process, some board watchers said.

Employers were charged with violating federal law in about four out of 10 union election campaigns supervised by the NLRB in 2016 and 2017, according to a recent study by the left-leaning Economic Policy Institute. Those elections were conducted under procedures the Obama-era board amended, which tightened deadlines and streamlined procedures.

The Trump administration board extended several deadlines and added additional steps for union elections in its rule published Dec. 18. The longer the election process goes on, the more opportunity there will be for unlawful activity, some observers said.

Instead, most unions reach their high water mark for worker support before filing a petition with the NLRB and then try to hold onto that backing in the face of employer efforts to peel it away, said Duff, who administered elections when he was a board agent. Employers often run sophisticated anti-union campaigns with mandatory worker meetings involving consultants hired to argue against unionization, Duff said. Workers can grow dissatisfied if unionization doesn’t happen swiftly, he said.

The view that extending election campaigns may lead to additional unfair labor practice allegations runs counter to the Republican board members’ claim that their procedural changes will reduce such charges. That expected decrease in unlawful activity was one of the rationales for rolling back some of the 2014 changes to the election process—amendments that were decried by employer advocates as the “quickie” or “ambush” election rule.

One of the most significant parts of the new election procedure rule, which is set to take effect in April, requires that disputes over bargaining unit composition and voter eligibility get resolved before workers cast their votes. Determining which workers are supervisors ineligible to vote before the election is held, the NLRB said, provides an opportunity to prevent managerial behavior that could prompt unfair labor practice charges. 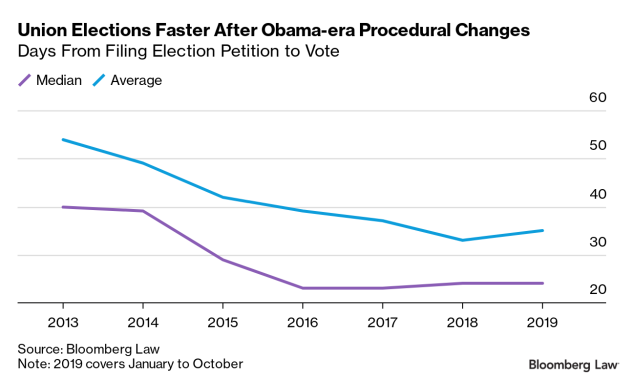 While there’s some disagreement about the impact of the board’s election changes on unfair labor practice charges, what appears certain is that they will make elections longer, particularly in contentious workplaces. The minimum length of the election process in fully contested cases will more than triple, jumping from 23 days to 78 days, according to Democratic NLRB Member , who dissented from the rule before her term expired Dec. 16.

McFerran’s departure left the board with just three Trump-appointed members.

But , Republican NLRB chairman in 2017, said there’s no logical connection between the length of union elections and unlawful election-related conduct. It’s also unreasonable to suggest the election process should be faster because there might be some labor law violations during that period, said Miscimarra, now a management-side lawyer at Morgan Lewis & Bockius.

“The cornerstone of federal law is that employees decide for themselves whether to have union representation, and this gets determined based on majority vote, with the additional requirement that the employees be part of an ‘appropriate’ bargaining unit,” Miscimarra said via email. “The NLRB election procedures give meaning to the ‘majority vote’ requirement, and the NLRB has devoted more than eight decades to conducting union representation elections in an even-handed manner.”

In the relatively small share of cases in which a party’s unlawful conduct interferes with the election, the NLRB can order new votes, Miscimarra said. The board in some situations can even order an employer to recognize and bargain with a union without an election, he said.

The NLRB’s changes to election procedures should reduce rather than increase the share of elections that involve unfair labor practice allegations against employers, since companies will be able to train their supervisors properly, said Sara Kalis, a labor lawyer with Paul Hastings who represents employers.

The modifications aren’t about disadvantaging unions, Kalis said. They’re designed to ensure that elections are conducted in the best way possible and workers are free to make informed decisions, she said.

AFL-CIO General Counsel Craig Becker, on the other hand, said there’s no question that lengthening the election process creates more potential for unlawful employer conduct. But the “real question” is why did the Republican board majority make those changes, said Becker, a Democratic NLRB member during the Obama administration.

“They have a view, but they don’t want to inform that view,” Becker said.

In 2017, the NLRB issued a request for public input on the Obama board’s election procedure amendments. Nevertheless, the Trump board said it didn’t use the comments it received as a basis for its procedural changes, adding that it would have made them “irrespective of the existence of the Request for Information.”

The NLRB said it has the authority to make nonstatistical, policy-based changes to the election procedures.

Returning to Prior Timelines

The new revisions may result in elections returning to the longer timelines seen prior to the 2014 changes, which went into effect in April 2015, the NLRB said.

That round of Obama-era changes had a significant impact on the length of time between the filing of election petitions and the casting of ballots. Comparing the 12-month periods before and after they went into effect, the median petition-to-election period dropped by 39 percent, according to Bloomberg Law Labor Data. The average number of days decreased by 35 percent.

One driver of those overall variations appears to be the drop in the share of elections lasting 60 or more days and a corresponding spike in those that took two weeks or fewer.

“The big changes seemed to happen at the opposite ends of the election timeline,” Bloomberg Law analyst Robert Combs said.

Before the Obama-era rule went into effect, petitions were much more likely to remain pending for 60 days or more than 14 days or less. But the share of the longest and shortest elections leveled off after those procedural changes took effect. 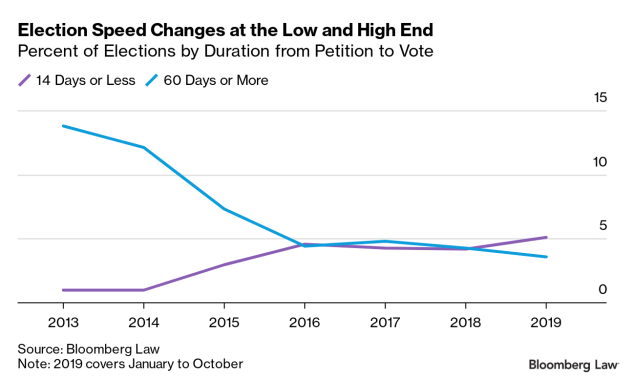 The impact of those changes on election outcomes appears less profound, with increases to annual union win rates after the Obama board’s amendments took effect in 2015, according to NLRB statistics. 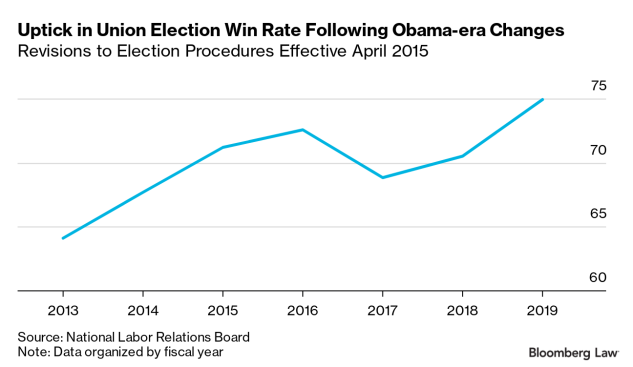 Elections Coupled With Charges Against Employers

“We know that, under the prior rule that shrunk election times, we still had employers accused of violating the law in 41.5% of elections,” said McNicholas, EPI’s labor counsel and co-author of the group’s December report. “Having a rule that adds unnecessary delay further opens the door to that sort of illegal conduct.”

The EPI study examined union elections that were petitioned for or completed during 2016 and 2017.

Nearly three in 10 elections involved allegations that employers disciplined or fired workers, or changed their work terms, according to the report. About the same share involved charges that companies threatened, coerced, or retaliated against workers, it found.

But Miscimarra, the former NLRB chairman, said the EPI study is flawed. For example, it focused on charges even though historically only around 40% of charges have probable merit, he said.

“So even if one accepted (hypothetically) the study’s other assumptions,” he said, “the EPI study leads to a conclusion that more than 83% of elections had no unlawful employer conduct.”